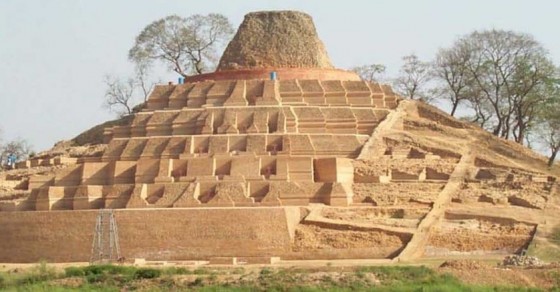 Motihari is the administrative centre of Bihar‘s East Champaran district. It’s 152.2 kilometres north of Patna, the state capital. Motihari is home to a multitude of scenic spots as well as historically significant sites and Buddhist holy sites. Apart from the city’s many attractions, there are a number of tourist destinations around the city that are not to be missed and make for great weekend trips with your family and friends.

Chandrahiya is a village in the East Champaran district of Bihar. In the Champaran movement, Chandrahiya maintains a unique status. Gandhi was stopped at this village on his route to the hamlet of Jasaulipatti on April 16, 1917, to listen to the issues of farmers who were being compelled to produce indigo instead of food crops.

A police officer in a horse-drawn buggy had served Gandhi with a notice issued by then Champaran collector WB Heycock, directing him to leave the district borders immediately. Gandhi ji had complied and returned to Motihari in a bullock cart. But he refused to leave Champaran and, two days later, appeared in the court of the sub-divisional magistrate and explained why he would not leave Champaran, triggering the Champaran Satyagraha.

Areraj is a holy city in North Bihar, located 28 kilometres south-west of Motihari on the Pucca Road. On the occasion of Shrawani Mela, the famed Someshwar Nath Mahadev Temple attracts millions of pilgrims from surrounding districts as well as Nepal (During July-August). Areraj, a village, has grown up to become the administrative centre of the Areraj Subdivision.

At Areraj, there is also an Ashokan pillar that attracts tourists all year.

This lofty stone column, built by Priyadarshee Lord Ashok in 249 BC in the village Lauriya in Areraj subdivision, is located on the left side of the Areraj – Bettiah route. The “Stambh dharma lekh” pillar, which displays six of his edicts in beautifully preserved and neatly cut lettering, is a single block of polished sand stone 36 12 feet above the ground with a base diameter of 41.8 inches and a top diameter of 37.6 inches. This section is just roughly 34 tonnes in weight, yet it must be many feet of the shaft dug in the earth. The total weight of the block must be around 40 tonnes. This pillar does not have any capital. According to reports, the pillar was adorned with an animal figure, but it was later moved to the Kolkota Museum.

King Ashoka’s edicts are most plainly and enthusiastically etched, and are divided into two distinct sections, one to the north comprising 18 lines and one to the south including 23 lines. However, these are no longer in good condition and have been harmed by the effects of weather. The villagers refer to the pillar as ‘Laur,’ which is a phallus, and the neighbouring village is named Lauriya after it.

The Ashokan pillar is a protected monument according to the Archaeological Survey of India.

The foundation stone for this Gandhi memorial pillar was placed on June 10, 1972, by the then-Governor, Mr. D.K.Barooch, and it was dedicated to the country on April 18, 1978, by Mr. Vidyakar Kavi, a Gandhian. Mr. Nand lal Bose, a well-known Santiniketan artist, constructed this memorial pillar to honour Mahatma Gandhi’s Champaran Satyagah, who was the first to speak up against the injustices committed by British Indigo planters against poor Champaran peasants. The 48-foot-long Chunar stone pillar stands exactly where Mahatma Gandhi was produced before the court of the then-S.D.M., Motihari on April 18, 1917, in violation of orders under Section 144 Cr. P. C. Mahatma Gandhi experimented with Satyagrah on this soil of Motihari in Champaran, and hence Champaran has been the starting point of India’s freedom movement initiated by Gandhi ji.

The Gandhi Museum includes a collection of images and memorabilia from the Champaran Satyagraha on display.

Bihar’s historical significance has been reestablished with the discovery of the “largest ever Buddhist Stupa” at Kesaria in East Champaran district, around 120 kilometres from Patna and 30 miles from Vaishali on the Indo-Nepal border. India’s Archaeological Survey Team After excavating, officials uncovered this Stupa in 1998. According to ASI officials, Bihar enjoys the proud distinction of holding the world’s highest ever-excavated Stupa.The protection of Kesaria Stupa marks a watershed moment in India’s conservation history. Previously, the ASI team had no idea that the excavated Stupa would be the tallest and largest in the world.

It is one foot taller than the famed Borobodur Stupa in Java, a world heritage monument, rising to a height of 104 feet and substantially reduced from its original height.

Before the 1934 earthquake in Bihar, the Kesaria Stupa stood 123 feet tall. According to an A.S.I. study, the Kesaria Stupa was 150 feet tall and the Borobodur stupa was 138 feet tall in the halcyon days when Buddhism thrived in India. Kesaria’s height has been reduced to 104 feet, and Borobodur’s to 103 feet. The height of ‘Sanchi Stupa,’ a world heritage landmark, is 77.50 feet, which is about half the height of Kesaria stupa.

Lord Budha spent his final journey on a magnificent height at Kesaria. He made spectacular announcements here, which were eventually recorded in Buddhist Jatak – Story. Buddha stated here at Kesaria that in former lives, he governed as Chakravarti Raja. After giving them the “BEGGING BOWL,” Buddha also asked Licchivis to return to Vaishali.

A.S.I. Patna circle’s recent excavations of Kesaria Stupa shed information on Buddhist history. The excavation reveals the terraces with the “Pradakshina route” that circle the stupa. A significant discovery is a humber of figures of Lord Budha in the “Bhoomi Sparsh Mudra” and other sitting images. Each layer of these figures is formed of earth and pebbles. Another point of interest is the earthen lamp, decorative bricks, and various potteries. The Buddhist treasure trove has been revealed in all its splendour, much to the delight of devotees all around the world and the general public.

Archeologists say Licchivis of Vaishali erected the Stupa in Kesaria known as “Raja Ben ka DEORA” before Budha gained Nirvana. It is the most populous site along the Buddhist road. According to his chronicle, Chinese pilgrim HieunTshang visited this Stupa site in the seventh century.

The months to visit are from October to March. In East Champaran, the winter season officially begins in November.

How to Reach East Champaran (Motihari)

To get to Motihari, you can use a variety of forms of transportation. Buses and railways are available, and buses may be taken directly to Motihari.

Motihari has its own railway station, Bapudham Motihari, which offers regular services to all important destinations. You may thus take direct trains to Motihari, which is the best choice. Train costs are also less expensive than bus fares, however to travel comfortably by train, tickets must be purchased in advance. Regular trains would run between Motihari and the cities and towns of New Delhi, Anand Vihar, Howrah, and Raxual.

Buses to Motihari will run on a regular basis from Patna, the state capital. The city of Patna is around 160 kilometres away from Motihari, and bus prices will range from Rs 210 to 250 per person. The majority of buses will be managed by the state government or private companies.

Some of the important stations/routes from where regular buses service is available to & from Motihari:

Patna Airport is the closest airport to Motihari (Lok Nayak Jayprakash Airport). The Patna Airport is around 160 kilometres from Motihari, and there is a frequent bus and taxi service to and from the Patna Airport. Many cities, including Lucknow, Kolkata, Chennai, Ranchi, Mumbai, New Delhi, and Bhopal, have daily flights.