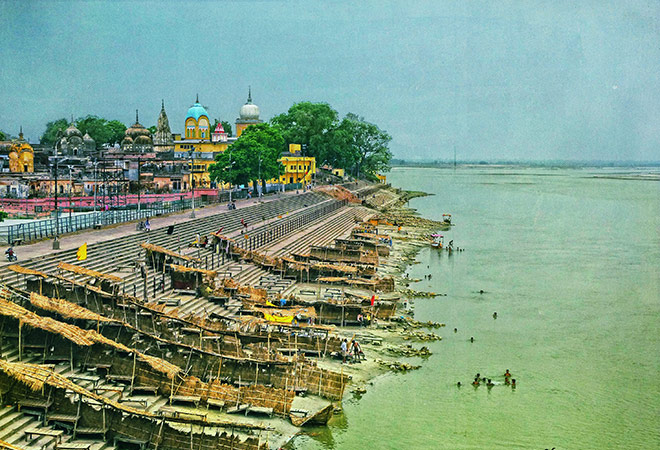 Ayodhya is a city in Uttar Pradesh, India, and the administrative centre of the Ayodhya district and the Ayodhya division. Together with Faizabad, it shares a municipal corporation.

Best Places to Visit in Ayodhya

There are numerous religious and historical sites worth seeing in Ayodhya due to it being the birthplace of Sri Rama and a major point in Indian history. The following are a few of them: –

This temple is located in Ayodhya near Ram Ki Paidi. Nageshwarnath temple is supposed to have been built by Kush, Rama’s son. While swimming in the Saryu, Kush’s armlet was misplaced and picked up by a Nag-Kanya who fell in love with him. Her devotion to Shiva led Kush to build this shrine for her. The temple remained in fine condition till Vikramaditya’s reign. Naval Rai, Safdar Jung’s minister, constructed the current shrine around 1750. Here, Shivratri is celebrated in a huge fashion, and a Shiv Barat parade is held as part of the festivities. Thousands of worshippers go to the temple during the Mahashivratri festival to pay their respects to the goddess.

Near Naya Ghat, this shrine is linked with numerous Ramayana stories. Mother Sita, following her marriage to Lord Rama, came at Ayodhya with an idol of goddess Girija Devi, according to legend. He had an elaborate temple erected for it, and Mother Sita used to travel there to adore the goddess of mercy. In its place stands a large statue of Goddess Devkali, the local divinity.

Located on the banks of the Saryu, Ram ki Paidi is a series of ghats that lead to the river. The riverfront creates a stunning scene, especially at night when it is floodlit. Some worshippers come to wash away their sins by taking a plunge in the river from these platforms.

Shri Ram Janaki Birla Temple is a brand new temple that was built by the Birla family. Ayodhya-Faizabad route, opposite Ayodhya Bus Stop. Ram and Sita are worshipped at this temple which is devoted to them.

Ayodhya railway station is 1 km from Hanuman Garhi. Vikramaditya had a temple built for Hanuman, which became known as Hanuman Garhi after his death. Lord Hanuman (Pavan Putra) is said to have resided here to defend Ayodhya. At the main temple, you’ll discover a lovely idol of Bal (young) sitting on Maa Anjani’s lap.

North-east of Ram Janam Bhumi, Ramkot in Ayodhya, is Kanak Bhawan Kanak Bhawan is one of Ayodhya’s most beautiful and famous temples, and it’s a must see. This Bhawan is said to have been given to Devi Sita by Kaikei shortly after her marriage to Lord Ram, according to legend. This is Devi Sita’s and Lord Rama’s private residence. Vikramaditya remodelled it for him. It was afterwards rebuilt/renovated by Vrish Bhanu Kunwari, and it still remains today as a result. Garbhgrih (sanctum) is dominated by Lord Ram and Devi Sita statues.

Located in Ayodhya, Uttar Pradesh, India, Gulab Bari (literally “Garden of Roses”) is the Tomb of Nawab Shuja-ud-Daula Around the water fountains, you’ll find a nice variety of roses. As part of this complex, there is the Gulab Bari maqbara, which is the mausoleum of the third Nawab of Oudh (now Awadh). With its fountains and water courses, the tomb itself is situated in the middle of a Charbagh garden.

Visited or not, Gulab Bari is a place of prayer and hosts many cultural events throughout the year. As a holy site, it is revered by the people. There are rumours that the monument was formerly utilised as a hideout by the heirs of the Nawab Shuja-ud-daula.

Eighteen ‘Kalyanak’ have taken place in Ayodhya under different ‘tirthankars’. These five Thirthankars were born here, namely Adinath, Ajitnath, Abhinandannath, Sumatinath and Anantnath, who taught their religious ideals. As a result of Kesari Singh, the Nawab of Faizabad’s treasurer, five Jain temples were built in order to commemorate the birthplaces of the Thirthankers. Rishabhdev is the first Tirthanker of the Digamber Jain sect, also known as Adinath, Purdev, Vrishabhdev, and Adi Brahma. Located in the Raiganj neighbourhood of Ayodhya, Badi Murti is a stunning, majestic new temple. A 31-foot-high marble statue of Rishabhdev has been erected at this location. With the blessings of Acharya ratna Deshbhushanji Maharaj and Aryika Gyanmati Mataji, this site has just been constructed.

Best Time to Visit in Ayodhya

The best time to visit Ayodhya is during the winter season, which begins in October and lasts until March.

How to Reach Ayodhya

By Air : To go to Ayodhya, you may fly into Lucknow International Airport. Also, people may fly into Gorakhpur, Prayagraj, and Varanasi airports to get to the holy city.