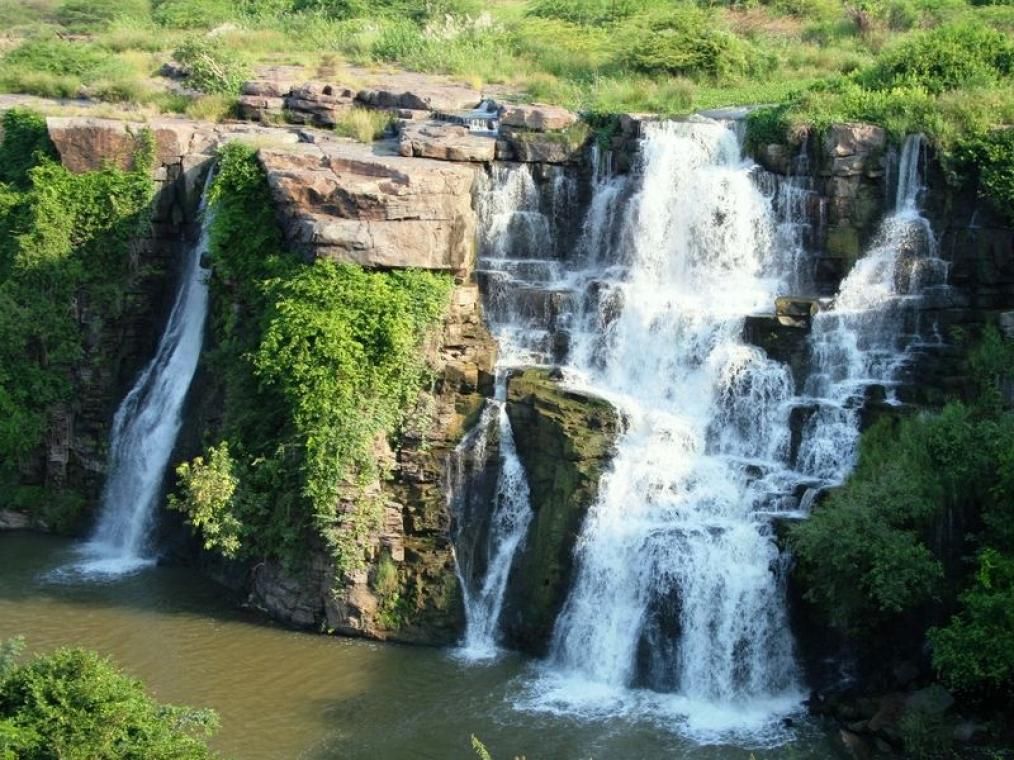 Guntur is a city in the Indian state of Andhra Pradesh and the administrative centre of the Guntur district. Guntur is the third-largest city in Andhra Pradesh. It is located on the Eastern Coastal Plains, 64 kilometres west of the Bay of Bengal. Guntur is famous for its chilli, cotton, and tobacco exports, as well as having Asia’s largest chilli market yard. Many ancient temples and monuments surround the city, including Kondavidu, Amararama, Caves, and Pedakakani.

Best Places to Visit in Guntur

Ethipothala Falls is a 70-foot-high water cascade in Guntur, Andhra Pradesh, India. Located on the Chandravanka River, a tributary of the Krishna River that joins on its right bank. The waterfall is formed by the confluence of three streams: ChandravankaVagu, NakkalaVagu, and TummalaVagu.

The Nagarjuna Sagar Dam is a sight to behold when its gates are opened during the peak flood season in Monsoon. It is one of the largest dams erected in Asia in recent times. Nagarjuna Sagar Dam, India’s highest masonry dam, is also a source of national pride. The project has a catchment area of approximately 215000 square kilometres. The project also features India’s largest canal system network. The magnificent dam, which stands 124 metres tall, was built in 1969. It is one kilometre long and includes 26 crest gates. The reservoir of the dam can hold up to 11, 472 million cubic metres of water.

The project began in February 1956, and after a brief hiatus owing to a lack of current technology, it was completed with stone rather than concrete. After the crest gates were placed, the dam was entirely finished in 1972. The dam has two canals, the left and right canals that supply water from the reservoir. The dam is also one of the earliest projects built-in post-independence India for irrigation and hydroelectricity generation. Exclusively for the purpose of tourism, a lake developed behind the dam, which boasts of its status as the third-largest man-made lake anywhere in the world.

The majestic edifice is enhanced by a gorgeous setting and a remarkably picturesque water body. The power production turbines are located in the Nalgonda (Telangana) area. The dam gets its name from a neighbouring mountain and island named Nagarjunakonda, which was previously home to an ancient Buddhist Guru. There is a well-known and well-kept museum here that houses ancient relics. Aside from the lake, which has regular boating services, travellers may also explore nearby sites like as the Ethipothala waterfalls and the Srisailam Wildlife Reserve. According to India’s first Prime Minister, Jawaharlal Nehru, the dam was intended to resemble a modern-day shrine. Aside from serving drinking water, agriculture, and power demands, the dam is an attractive tourist site because to the vast reservoir, the tremendous flow when the crest gates are open, and the panoramic vista that enthrals travellers. The nearest airport is in Hyderabad, and it will take you to

The nearest airport is in Hyderabad, and it will take you to the Nagarjuna Sagar Dam.

Museum of Amaravathi This is one of the most prominent Buddhist sites in the nation, formerly known as Andhra Nagari (Amaravati). More than 2000 years ago, Acharya Nagarjuna erected India’s greatest stupa here. Amaravati, considered the most important pilgrim centre for Buddhists in South India, is 33 kilometres from Vijayawada Haritha Berm Park and the RTC Bus Stand. Amaravati is the most sacred pilgrimage site for Buddhists in South India. In Amravati, there is an Archaeological Museum (ASI). Hours of operation: 10:00 a.m. to 5:00 p.m. Finished on

Amaravathi is called after its famed temple of Amareswara Swamy, which enshrines the Swayambhulinga and is located around 16 miles from Guntur. Amaravathi is also home to the Mahachaitya Stupa, which was constructed in the second century B.C. The stupa is lavishly adorned with sculptures depicting Buddha’s life and teachings. The stupa also features a museum with historic monuments, clay artefacts, and a pictographic portrayal of Buddha’s life and teachings.

The temple walls are ornamented with many inscriptions that explain the various kingdoms that ruled over the region. The Guntur Museum houses a large collection of antiquities and artefacts such as Stupa-slabs, sculpture, railings, silver, gold, and lead coins, crystal caskets, and potsherds. Bhattiprolu, located 20 miles from the city, is the old kingdom of PratiPalaputra and the first known kingdom in Guntur District.

The Bhavanarayanaswami Temple is one of the oldest temples (1400 years old) in Guntur District, located 49 kilometres from Guntur. This temple is supposed to date from the Mauryan period, and Bhavanarayanaswami is the presiding deity. The temple is well served by train and bus lines and is located on the Madras-Calcutta Line. The town of Baptala gets its name from the temple’s presiding deity, Bhavanarayana Swami. During the Mauryan Empire, the settlement of Baptla was also known as Bhavapuri.

Best Time to Visit in Guntur

The winter season is the finest time to visit Guntur. The temperature stays pleasant and is suitable for touring. October, November, December, January, February, and March are the finest months to visit. Guntur’s winters begin in December and extend through January.

How to Reach Guntur

Gannavaram Airport is the closest airport. The city of Vijayawada is 17.9 kilometres away. The Guntur road is 35 kilometres from there. From Vijayawada to Guntur, taxi and bus options are available.

From Vijayawada to Guntur, buses and taxis are available.