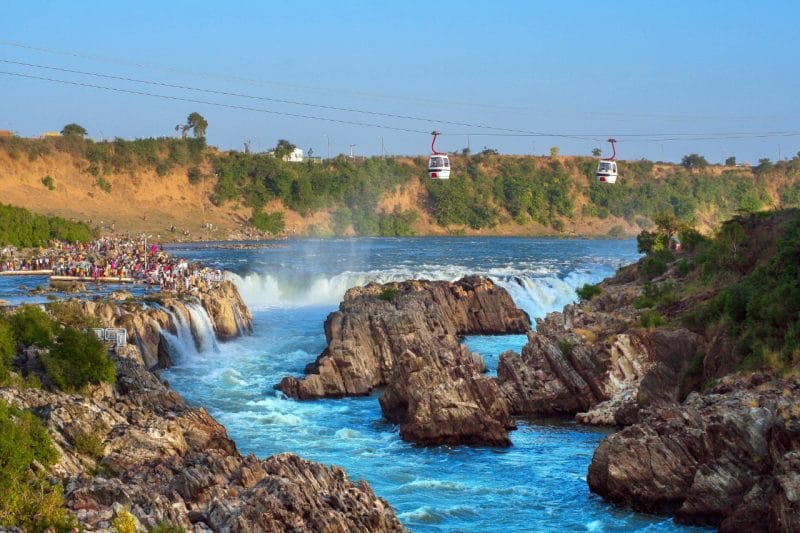 Jabalpur is a city in Madhya Pradesh, a state in central India. The Madan Mahal Fort, erected in 1116 on a rocky mountaintop on the city’s western borders, is a must-see. The centuries-old Pisanhari Ki Madiya Jain temple, located farther west, gives panoramic views of the city. Another Jain temple, Hanumantal Bada Jain Mandir, is located on the northern bank of a lake. The Rani Durgavati Museum, located in the heart of the city, houses finely carved statues. Jabalpur is one of Madhya Pradesh’s most prominent cities, as well as the state’s cultural hub. Major tourist sites include Dhuandhar Falls, Bhedaghat, and Chausat Yogini Temple, as well as the Navratri and Dusshera festivals.

Best Places to Visit in Jabalpur

The Narmada narrows as it flows over the Marble Rocks and then plunges in a waterfall known as Dhuandhar, or the Smoke Cascade. The drop is so tremendous that its roar can be heard from a long distance away. The falls and the shattering of the volume of water at the peak present an incredible spectacle of Nature’s might unleashed.

Dhuadhar Falls is a popular tourist destination not only in Jabalpur, but throughout Madhya Pradesh. This fall’s shade is one-of-a-kind, dropping from a height of 10 metres. It gets its name from the Narmada River. This lovely episode is inspired by the famous marble rocks. The sound of cascading water can be heard from a great distance away when this fall falls along the wide stream. It becomes a location to smoke or smoke by falling from this fall. As a result, it is known as Smokhindhra Waterfall. Dhuadhar waterfall is a spectacularly beautiful location, and as a result, a huge number of tourists will visit this year. This location is also great for a picnic with friends and family. In front of the waterfall, there is a huge open area. This waterfall, located 25 kilometres from Jabalpur, is a renowned tourist site due to its lovely beauty.

Jabalpur’s Bargi Dham Dam is one of 30 dams on the Narmada River. This Dam’s significance grows since it serves as a key source of water supply in Jabalpur and the neighbouring districts. Two significant irrigation projects established on this Dam are the BargiDivarshan Project and the Rani Avantibai Lodhi Sagar Project. Bargi Dame has become into a popular tourist destination in Jabalpur over time. The Madhya Pradesh government has also taken significant steps in this area. The government has built a resort here, with the front facing Dam. This resort provides a unique view of the dam and reservoir. There is also a boat trip, fishing, water scooters, and other activities to make the journey to Bargi Dam more fun. Not only that, but several birds, like Mena, Paratha, Saras, Pigeon, and Local Kali Gauriya, can be spotted in the neighbourhood of the Dam.

Because to the tallest statue of Lord Shiva, which was built in 2004 and was made available to the public, tourists, and devotees on February 15, 2006, Kachnar City is well recognised as a tourist attraction and religious destination for locals and people from overseas. The statue was 76 feet tall, or 23 metres, and was built under the open sky on a cavern containing replicas of the lingam (Shiva Lingam) known as the “Jyotirlinga.” There are around 12 Jyotirlinga in the caverns where Lord Shiva’s statue is constructed. These 12 Lingams were collected from Lord Shiva sanctuaries across the country.

The Madan Mahal Fort in Jabalpur, Madhya Pradesh, bears witness to the lives of monarchs who governed Jabalpur for many years in the 11th century AD. Raja Madan Singh built the Madan Mahal Fort on a hilltop a few kilometres outside of town. The fort is also associated with the king’s mother, Rani Durgavati, who was a powerful Gond queen of the area. This fort, which is currently in ruins, speaks volumes about Rani Durgavati and her well-equipped administration and soldiers. The royal family’s main pleasure parlour, war rooms, little reservoir, and stable are all worth seeing. The fort says volumes about the lives of individuals from a bygone age, and it allows one to measure the unrivalled royalty of the time. The Madan Mahal Fort is one of India’s most intriguing old sites and is highly recommended for a visit to Jabalpur.

Dumna Nature Reserve Park is a public ecotourism facility in the Jabalpur district of the Indian state of Madhya Pradesh. It covers 1058 hectares and features a dam, woodlands, and wildlife. The park is home to a variety of wild animals, including chital, wild boar, porcupine, jackals, and numerous bird species. Leopard sightings have also been reported in and near the area. There is a children’s park and a restaurant. Other attractions at the neighbouring Khandari Dam include a hanging bridge, tent platform, rest house, fishing platform, toy railway, and boating. Because of the presence of crocodiles, water activities such as bathing and swimming are prohibited.

Jabalpur is well-known for its natural wonder, the Balancing Rock. This tourist attraction is located in Deotal, near the base of Madan Mahal Fort, in a region named Shailparna. The eroded volcanic rock formations may be seen in the Balancing Rock. The rock rests on the massive base rock by hardly touching it. Despite this, the Balancing Rock survived an earthquake of magnitude 6.5. It is said that disturbing the balance of this granite is impossible.

The best time to visit Jabalpur is all year round. Summer lasts from March through May and is dry.

How to Reach Jabalpur

The nearest airport is Dumna Airport in Jabalpur, which is about 20 kilometres away. By air, Jabalpur is well linked to Mumbai, Delhi, Pune, Nagpur, Bhopal, and Indore.

The road network of Jabalpur is highly developed. Jabalpur is located on the National Highway-7.