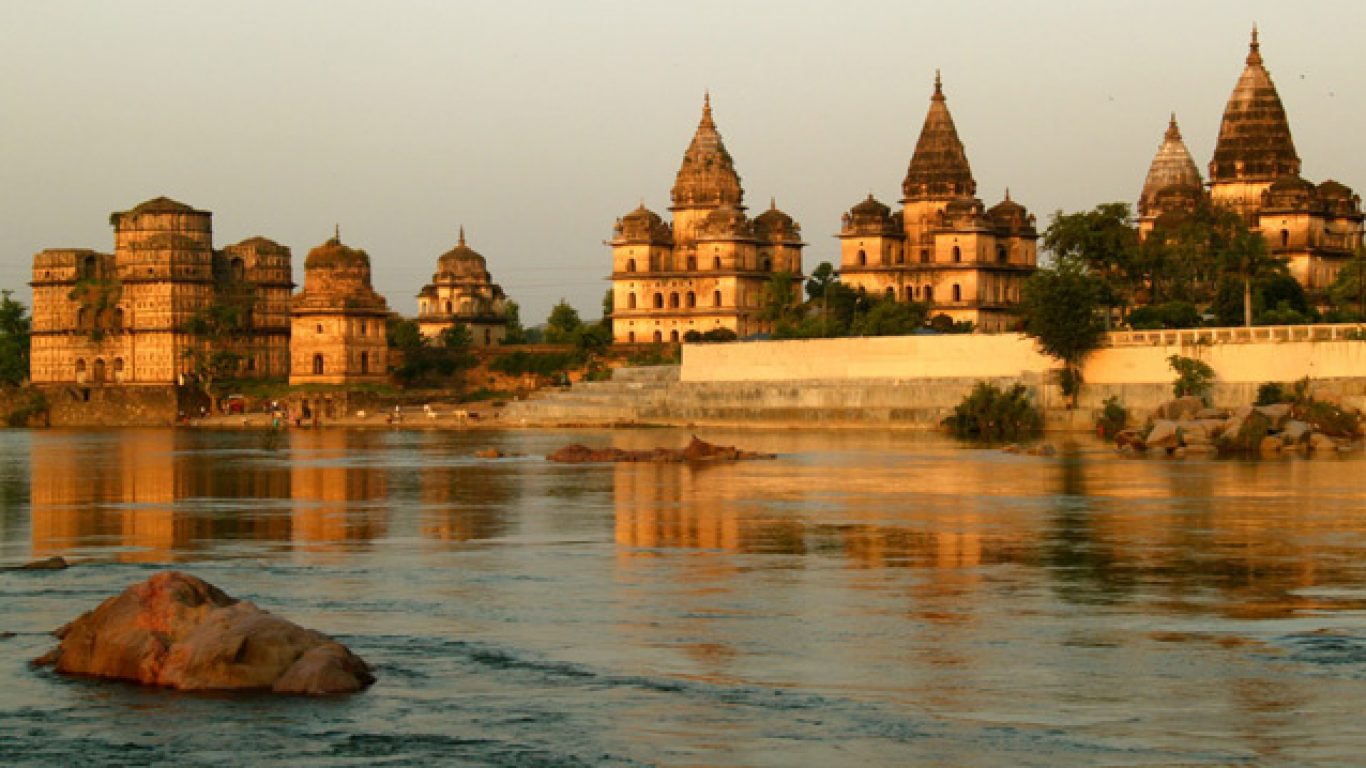 Orchha is a town in the Madhya Pradesh state of India’s Niwari district. Rudra Pratap Singh founded the town sometime after 1501 as the seat of an eponymous former princely state that covered parts of central and north India, in the Bundelkhand region.

Orchha was the former capital of the Bundela rulers. The town is rich in history and is well-known for its palaces and temples from the 16th and 17th centuries. The architectural splendour of Orchha’s monuments reflects the glory of its rulers. The Betwa River, on whose banks Orchha is located, and the forests that surround it draw visitors.

HOW TO REACH ORCHHA

Orchha is in the Indian state of Madhya Pradesh. It is reachable by road from major cities such as Gwalior and Jhansi. These cities are well-connected to the rest of India. Here’s how to get to Orchha:

Gwalior, the nearest airport, is 126 kilometres away. Gwalior is accessible by air from Delhi, Mumbai, and Jabalpur. The nearest international airport is in Delhi (440 kilometres).

The nearest railway station is Jhansi Railway Station, which is about a 25-minute drive from town. It has connections to all of Madhya Pradesh’s major cities. It is connected by Rajdhani Express, Tamil Nadu Express, Nzm Garib Rath, Karnataka Express, Pushpak Express, Punjab Mail, and Jhelum Express to cities such as New Delhi, Bangalore, Mysore, Lucknow, Kanyakumari, Puri, Ahmedabad, Agra, and Jaipur.

Orchha is situated at the crossroads of Jhansi and Khajuraho. Jhansi has the nearest bus station. There are regular bus, tempo, and taxi services from Jhansi to Orchha.

Orchha has a number of tourist attractions. Orchha has 14 chhatris, or memorials, for its rulers, which are located near the Kanchan Ghat on the Betwa River.

1. Jehangir Mahal from atop Raj Mahal

Fort Complex: The fort complex is a great place to visit; hit this first to obtain an all-day ticket good for all the sights in Orchha. Divided into 3 parts, it consists of

Raj Mahal: This palace, located to the right of the quadrangle, was built in the 17th century by Madhukar Shah, Bir Singh Ju Deo’s deeply religious forefather. The plain exteriors, crowned by chhatris, give way to exquisite murals, boldly coloured on a variety of religious themes, on the interiors. For a tip, get a good guide inside here to take you all over the complex, including locked rooms. The murals depicting religious themes are well known in the Raj Mahal, the second palace in this fort complex.

Jehangir Mahal: Raja Bir Singh Ju Deo built it in the 17th century to commemorate Emperor Jehangir’s visit to Orchha. Its strong lines are balanced by delicate chatris and trellis work, creating an impression of extraordinary richness. The Jahangir Mahal, built by Bir Singh Deo in the early 17th century to commemorate the Mughal Emperor’s visit, is an important monument of this fort. On the one hand, it is known for its delicate work, while on the other, it is known for its strong masonry.

Rai Parveen Mahal: Rai Parveen, a poetess and musician, was the beautiful paramour of Raja Indramani (1672-76) and was sent to Delhi on the orders of Emperor Akbar, who was smitten by her. The Great Mughal was so impressed by her purity of love for Indramani that he sent her back to Orchha. The Rai Parveen Mahal, dedicated to the 17th-century poetess-musician, is the complex’s third palace and is set among well-kept gardens.

This is the pivot around which Orchha’s life revolves. Lord Ram is the presiding Deity here. The idols were supposed to be installed in the magnificent Chaturbhuj temple, but they refused to move once they were placed on the ground (where they are now). As a result, a makeshift temple known as Ram Raja temple was built around it. It has an excellent courtyard that is tiled with marble, and the temple, which is painted pink and yellow, gives it a bright appearance. Cameras and bags are not permitted inside. The Raja Ram Temple, which was formerly a palace, is a popular tourist destination. Lord Ram, according to legend, appeared in the dream of the then-ruler Madhukar Shah.

The ruler then brought an idol of Lord Ram and installed it in this palace before converting it into a temple. However, as the installation date approached, the idol refused to move from its current location. The king was forced to recall his dream, which had predicted that the idol would remain in its original location. As a result, this palace was converted into a temple, and Lord Ram is now worshipped as a king here.

The temple, which was built on a massive stone platform and reached by a steep flight of steps, was specially built to house the image of Rama that remained in the Ram Raja Temple. The delicate exterior ornamentation includes lotus emblems and other religious symbols. The sanctum is chastely plain on the inside, with high, vaulted walls emphasising its deep sanctity. Discover the hidden stairs to the roof for a panoramic view of the entire area. The young key-holder will unlock the door to the hidden stairs and take you up for a fee, despite the fact that he is supposed to do so for free. The idol of Lord Ram was originally destined for the Chaturbhuj temple in Orchha. The exterior of this temple is adorned with religious symbols, while the interiors are stark.

This temple is connected to the Ram Raja Temple by a flagstone path. The design is an intriguing fusion of fort and temple moulds. The most exquisite of Orchha’s wall paintings can be found in the interiors. These murals, which cover the walls and ceilings of three halls, are vibrant compositions that cover a variety of spiritual and secular subjects. They are in excellent condition, with the colours retaining their vibrancy. The Laxminarayan temple is a one-of-a-kind combination of temple and fort architecture. This temple’s frescoes depict social and secular themes. The vibrant colours of these frescoes have been preserved.

This complex, designed as a formal garden, attests to the Bundelas’ refined aesthetic qualities. A central row of fountains leads up to an eight-pillared palace-pavilion. The cool summer retreat of the Orchha kings was a subterranean structure below. An ingenious water ventilation system connects the underground palace to Chandan Katora, a bowl-like structure with fountains that filtered droplets of water through to the roof, simulating rainfall. The Phool Bagh is a well-kept garden that served as the final resting place for the former Bundela rulers. There are fountains, pavilions, and an ingenious water ventilation system in this garden.

This small palace, which is now almost in ruins, is still a place of pilgrimage for Muslims. Dhurjban, son of Jhujhar, converted to Islam after marrying a Muslim girl in Delhi. He became a saint after spending the latter part of his life in prayer and meditation.

There are 14 Chhatris, or memorials to Orchha’s rulers, located along the Kanchan Ghat of the river Betwa on the town’s southern outskirts. Climb to the roof for a view of the river.

The main attraction in Orchha is the Orchha fort complex, which is located on an island in the River Betwa and contains a number of palaces to visit. The fort complex on the island is reached via a four-arched bridge.

The Shahid Smarak, which commemorates the martyrdom of Chandrashekhar Azad, the great freedom fighter, is a must-see.

Other places to visit in Orchha includew