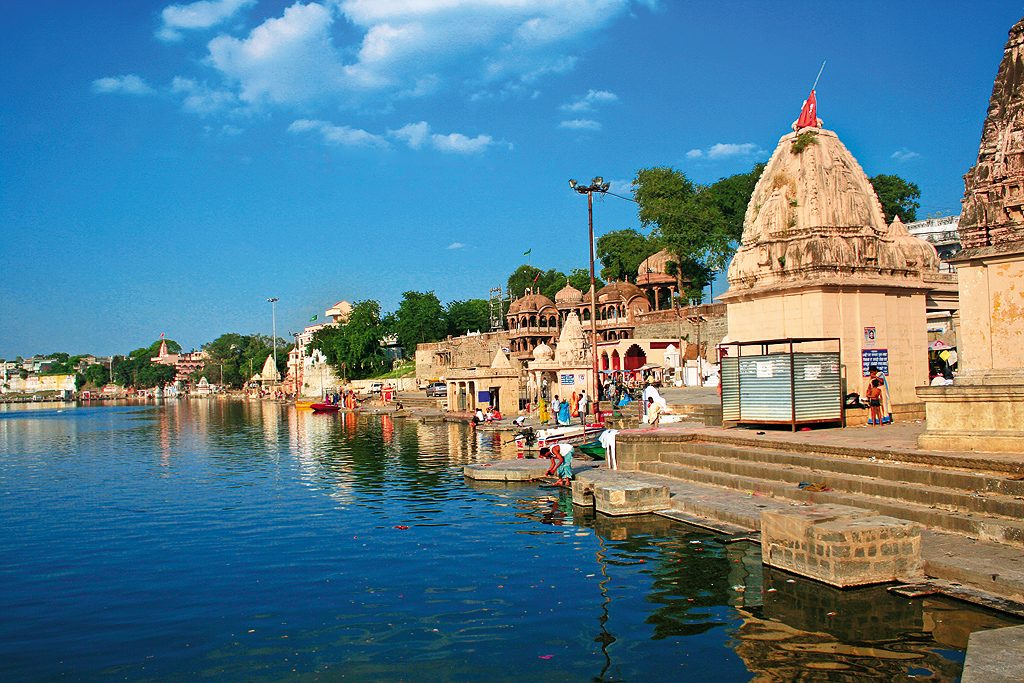 Ujjain is a historic city in Madhya Pradesh, India, located along the Kshipra River. The centuries-old Mahakaleshwar Temple, a tall building with a particularly decorated roof, is an important Hindu pilgrimage site. A colourful statue of Ganesh, the elephant-headed Hindu god, may be found nearby at Bade Ganesh Temple. A pair of towering black pillars studded with lamps may be found at Harsiddhi Temple.

Best Places to Visit in Ujjain

Kaliadeh Palace is located in Ujjain on the bank of the Shipra River. There is a Sun Temple there.

The temple is located on the Shipra’s Triveni Ghat, away from the historic town of Ujjaini. It is dedicated to the nine planets and draws large audiences on new moon Saturdays. Its religious significance has grown in recent years, despite the fact that there is no mention of it in ancient literature.

In the field of astronomy, Ujjain held a significant position. Great works on astronomy, such as the Surya Siddhanta and the PanchSiddhanta, were written in Ujjain. The Tropic of Cancer, according to Indian astronomers, is believed to cross through Ujjain. It is also the first longitude meridian of Hindu geographers. Ujjain had the repute of being India’s Greenwich since the 4th century B.C.

This temple holds a distinct place in the galaxy of Ujjain’s ancient sacred sites. The Annapurna idol is painted in dark vermilion and sits between the Mahalaxmi and Mahasaraswati idols. The temple also houses the Sri Yantra, a symbol of power or shakti. According to the Shiva Purana, as Shiva took Sati’s flaming body away from the sacrificial fire, her elbow landed here. The Skanda Purana contains an intriguing account about how the Goddess Chandi came to be known as Harsiddhi. When Shiva and Parvati were alone on Mount Kailash, two demons named Chand and Prachand tried to barge in. Shiva requested that Chandi destroy them, which she did. Shiva, pleased, bestowed the title “one who vanquishes all” on her.

The temple was rebuilt during the Maratha time, and the two pillars ornamented with lamps are unique Maratha elements. These lanterns, when lit during Navaratri, provide a magnificent spectacle. On the property, there is a historic well with an elegant pillar adorning the top.

The worship of the eight Bhairavas is a Saivite custom, and the most important of them is KalBhairava, who is said to have been constructed on the banks of the Shipra by King Bhadresen. The Avanti Khanda of the Skanda Purana mentions a KalBhairva temple. KalBhairava worship is thought to have been practised by the Kapalika and Aghora sects. Ujjain was a major centre for these two sects. Even today, whiskey is served to KalBhairava as part of the ceremony. Beautiful Malwa-style murals originally adorned the temple walls, but only vestiges of them remain.

Shri Mahakaleshwar of Ujjayini is one of India’s twelve renowned Jyotirlingas. The magnificence of the Mahakaleshwar temple has been brilliantly depicted in several Purans. Many Sanskrit poets, beginning with Kalidasa, have eulogised this shrine in emotional terms. Ujjain was once the centre place for calculating Indian time, and Mahakala was revered as the unique presiding deity of Ujjain.

This temple is located away from the hustle and bustle of the city and may be reached via a meandering route. The temple overlooks a broad expanse of Shipra waters, eliciting an ineffable sensation of tranquilly in those who visit. According to the Matsya Purana, Mangalnath is the birthplace of Mars. It was famous in ancient times for providing a clear view of the globe, making it ideal for astronomical study. The god worshipped in Mangalnath’s temple is Mahadev or Shiva.

Ujjain is best visited between October and March.

How to Reach Ujjain

Devi Ahilyabai Holkar Airport in Indore is the closest airport (53 km). Flights are available from Delhi, Mumbai, Pune, Jaipur, Hyderabad, and Bhopal on a regular basis.

Ujjain is a station located in the Western Railway zone. UJN is the code for it. Many major cities have train stations.