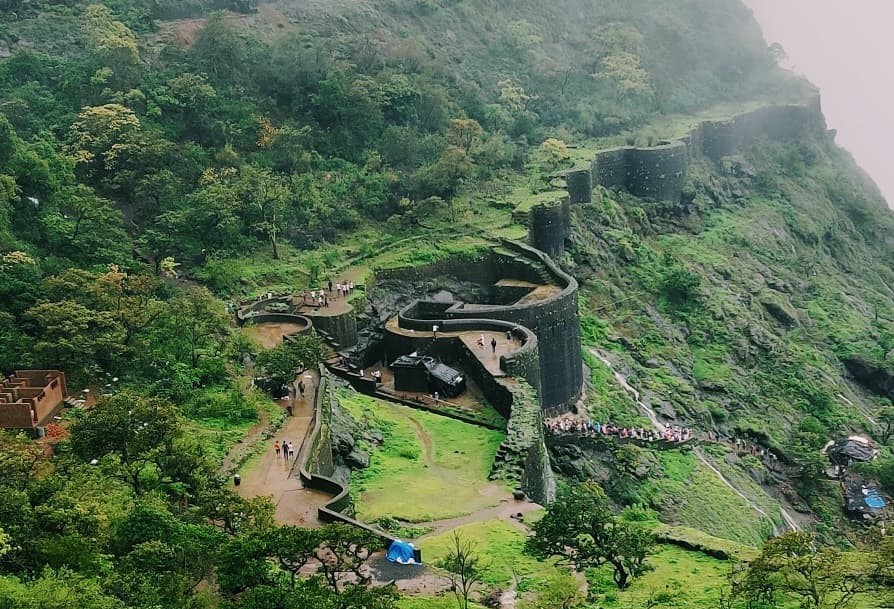 Raigad District is an administrative region in Maharashtra‘s Konkan division. The district was called Raigad after the fort that served as the old Maratha Empire’s initial capital, which was renamed from its previous name of Rairi.

Best Places to Visit in Raigad

Station on the Hill Matheran in Raigad District is an undulating hilltop clothed in shade trees that sprawls languidly at a height of 800 m. The voyage consists of a two-hour climb aboard a toy train. A strenuous 11-kilometer trek through dense and shaded forests, or a meandering vehicle ride, can also get you there.

The main market sells a wide range of products, including cane and leather objects, headgear, chappals, and Chikki. Vehicles of any type are not permitted in the town, making it an extremely peaceful and beautiful environment.

Varadvinayak Temple is one of the Ashtavinayak temples dedicated to Ganesha, the Hindu god. Peshwa General Ramji Mahadev Biwalkar is reported to have erected (restored) the temple around 1725 AD. The idols of the Navagraha Devatas, Mushaka, and Shivalinga may also be found in this temple. The temple is guarded by four elephant statues on each of its four corners. Throughout the year, devotees go to the Varadvinayak temple. Huge crowds may be observed at this temple during festivals such as Magha Chaturthi. The Varadvinayak Temple is in Mahad village, Khalapur taluka, near the town of Khopoli in the Raigad district of Maharashtra, India.

Ballaleshwar temple is one of Lord Ganesha’s eight “Ashtavinayak” temples. It is situated in the village of Pali, which is around 60 kilometres from Karjat in the Raigad district. It is close to the fort of Sarasgad and the Amba River. Moreshvar Vitthal Sindkar (Dighe) is claimed to have erected the temple around 1640AD. There is a bell in the temple that Chimaji Appa brought back after defeating the Portuguese in Vasai and Sasti. The previous wooden temple was restored in 1760 to make space for Shri Fadnis’ new stone temple.

Kanakeshwar Temple is located 10 kilometres from Alibag. A pleasant atmosphere and an ancient Shiva temple. The temple is located on a tiny hill, and the next settlement is ‘Mapgaon,’ which is approximately 12 kilometres from Alibag. The hill is over 370 metres high, and we must climb 700+ stairs to reach the temple. Nearby attractions include ‘Nagobacha Tappa,’ ‘Devachi Payari,’ ‘Pushkarni,’ ‘Gaymukh,’ and ‘Vyaghreshwar.’

Suvarnaganesh Tepmle, Diveagar, is around 75 kilometres from Alibag. Suvarnaganesh’s history is pretty intriguing. In the coconut growing region near the temple, a copper box containing a golden Ganesh Idol and various accessories belonging to Lord Ganesha was discovered beneath the dirt. Suvarnaganesh is a gold Lord Ganesha statue weighing more than 1 kg. According to local legend, idols were created around 300 to 400 years ago.

Raigad is a hill fort in the Raigad district, around 25 kilometres from Mahad. In 1674 AD, Chhatrapati Shivaji restored this fort and made it his capital. Raigad Fort has a rope-way system that allows visitors to access the fort in a matter of minutes from the ground.

The fort also has a view of the ‘Ganga Sagar Lake,’ an artificial lake. The sole primary route to the fort is via the “Maha Darwaja” (Huge Door). The King’s Durbar, located within the Raigad Fort, houses a reproduction of the original throne, which faces the main gateway, known as the Nagarkhana Darwaja. This enclosure was acoustically engineered to improve hearing from the doorway to the throne. The fort contains a well-known bastion named “Hirakani Buruj” (Hirkani Bastion), which was built over a very steep cliff.

Murud-Janjira Fort is located on the Arabian Sea shore, close to the port town of Murud. Janjira is regarded as one of India’s most powerful maritime forts. Sailboats depart from Rajapuri jetty to reach the fort. The fort’s main entrance faces Rajapuri on the coast. It features a little postern gate leading to the open sea for escape. On the fort’s bastions, there are several guns, both local and European in design. The fort, which is now in ruins, was once a full-fledged living fort with all the essential facilities, such as palaces, officer quarters, a mosque, two tiny natural fresh water lakes, and so on. The Nawabs of Janjira’s palace at Murud is still in fine condition.

The three massive cannons named Kalalbangdi, Chavri, and Landa Kasam are a unique feature of this fort. Because of their long range, these cannons were believed to be feared. Another gate to the west, named ‘Darya Darwaza,’ faces the sea.

Kolaba Fort was one of the Maratha Empire’s main naval bases. Kolaba Fort has two major entrances, one facing the sea and one facing Alibag. Despite being a beach fort, this fort features freshwater wells on its grounds, which is a unique feature. Kolaba, along with many other forts, was ceded to Kanhoji Angre in 1713 as part of a contract with Peshwa Balaji Vishwanath. He used it as his primary base for raids against British ships.

Sudhagad / Bhorapgad is a hill fort in the Indian state of Maharashtra. It is located in Raigad District, around 50 kilometres west of Pune, 25 kilometres south of Lonavla, and 10 kilometres east of Pali. Sudhagad Fort is sometimes referred to as Bhorapgad Fort. Bhorapgad was renamed Sudhagad by Shivaji Maharaj. Thaanale and Khadsambale caverns are located near Sudhagad.

The plateau of Sudhagad Fort is divided into three sections. The first section is the western plateau in front of the ancient palace. Building ruins may be observed here since the land is flat, and there is also a pond and a large tank. The second section includes the Bhorai Devi temple and the surroundings up to Takmak Tok. There are four large warehouse ruins. The third section is in the east. There is a large bastion here, and the remains may be seen in the neighbouring vast forest.

The major beach is located here. A long stroll on a rather flat area. During the week, it is quite clean and has a small audience. The sand is a dark shade of black with a rough texture. It is difficult to build sand castles. The tide is coming in from all sides, so you may have to wade through water on your way back.

It’s 50 kilometres from Alibag on the Alibag-Murud route, and it’s one of the cleanest and most beautiful beaches in the region, with practically ‘white’ sand. There are several cottages and resorts available, with prices ranging from INR 1500 to INR 20,000. Kashid is the ideal area for city dwellers to unwind. There are water sports facilities and a handful of modest snack stores.

These two beachfronts are located 10-15 miles north of Alibag on the north coast and are readily accessible from Mumbai. Mandwa is a lovely, unspoiled beach. On a clear day, there is a lengthy, stunning vista across the bay, all the way to the Gateway of India. Mandwa hamlet, with its lovely plantations of coconut trees, has its unique appeal.

Kihim has a lot to offer, including woodlands teeming with wild flowers and unusual insects and birds. The Kolaba Fort, located just a short distance from the beach, is well worth a visit. Chaul, about 15 kilometres from Alibag, is an ancient town with Portuguese remains, Buddhist caves, the Hamam Khana, a church, a temple, and even a synagogue.

Shriwardhan Bay entices beachgoers with its gentle winds, fine sands, and enticing waves. If you like seafood, there is no shortage of delights to try here. Adventurers can even take a small boat to the north side of the bay and visit a place where the Maratha Kingdom’s “Peshwas,” or prime ministers, formerly resided. Most visitors to Shriwardhan are interested in the “Peshwas Smarak.” Harihareshwar, noted for its peaceful and gorgeous coastline, is also home to Kalbhairav – the Shiva temple.

Akshi Beach is around 5 kilometres distant from Alibag. It is a white sand beach with several pine trees along the coast. The beach attracts a great number of people since it is home to a variety of birds as well as other flora and wildlife.

Nagaon Beach is a picturesque beach located roughly 7 kilometres from Alibag on the Alibag-Revdanda highway in Maharashtra’s Raigad District. The beach is bordered by pine trees and is popular with vacationers. Water sports such as boat rides and kayaking are available.

This location is popular for picnics and weekend getaways because to the abundance of cottages, vacation homes, farmhouses, and bungalows in the surrounding region. Tourists may enjoy the Arabian Sea tides, as well as the quantity of betel nuts and coconuts accessible along the coasts.

Best Time to Visit in Raigad

The best time to visit the Raigad fort is between November and March.

How to Reach Raigad

Lohegaon Airport in Pune and Chhatrapati Shivaji Airport in Mumbai, Maharashtra are the closest airports.

JNPT, Uran, is the primary national seaport. Mandava, Revas, Murud, Uran, and Dighi are small sea jetties for catamarans and powered boats. From the Gateway of India to Alibag, you can take a catamaran or a ferry boat. From Bhauche Dhakka port to Revas port, a small boat ferry service is also available. From Revas to Alibag, Maharashtra S.T. Bus service is provided.