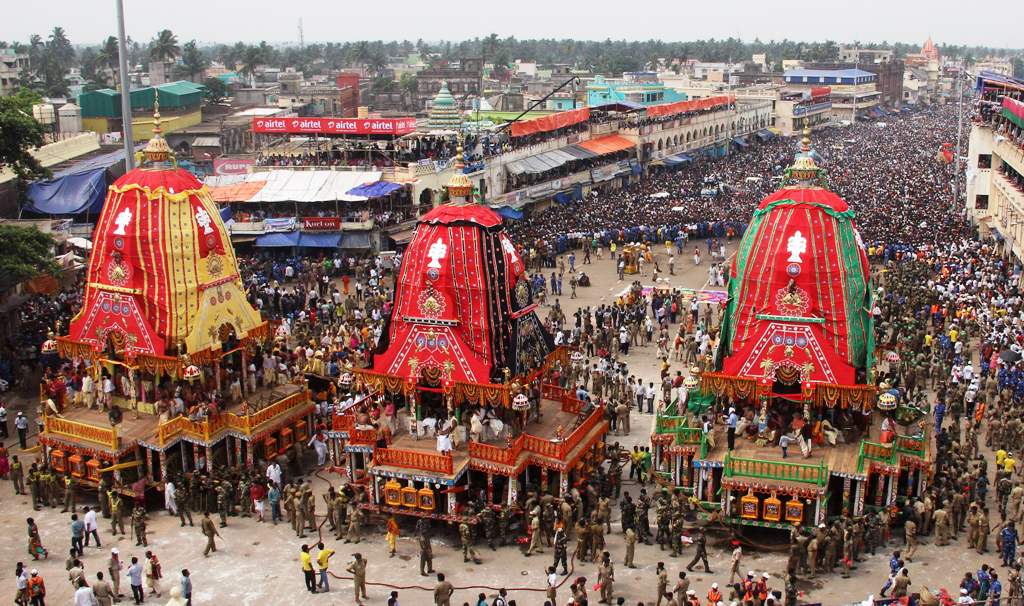 Puri is a city and a municipality in the state of Odisha in eastern India. It is the district headquarters of Puri district and is situated on the Bay of Bengal, 60 kilometres south of the state capital of Bhubaneswar. Puri is a beautiful beach city in Orissa situated on the coast of the mighty Bay of Bengal. Once a popular destination among hippies due to the legal use of Bhang, Puri still continues to be an absolute favourite amidst solo travellers and tourists, although the use of Bhang is very limited today. Apart from beautiful beaches, there are a number of places to visit in Puri that include intricately designed temples like Shri Jagannath Temple, villages famous for art and craft, museum, and the famous Chilika Lake that is visited by hundreds of migratory birds.

Puri sightseeing is incomplete without the Rath Yatra or Chariot Festival that takes place in the month of June-July every year. It is one of the most famous festivals celebrated in Puri where thousands of devotees take part in the procession and pay obeisance to the deities. Puri Jagannath Temple is also a sacred pilgrimage site and one of the Char Dhams in India. The best time to visit Puri is from July to March and must be avoided during the peak summer months. Here is a comprehensive list of all the top places to visit in Puri while you plan a trip to this sacred city.

Puri is located close to Bhubaneswar which has great air, road and rail connectivity. Puri itself is accessible by road and rail from most major parts of India. Here is how to reach Puri:

Biju Patnaik airport at Bhubaneswar is the nearest airport, which is nearly 56 km from the heart of the Puri city. The airport is connected to Delhi and Mumbai. International travelers need to get connections through Delhi or Kolkata.

Puri is a major railway junction. Regular direct train services are available from many cities in India, including Bhubaneswar, New Delhi, Chennai and Kolkata.

Puri is connected with the neighbouring cities through well constructed roads. Buses are considered to be the main option to travel to Puri as the bus stand in near the Gundicha Temple. Bhubaneshwar and Cuttack can be reached in 15mins by bus.

Located in the sacred city of Puri, Shri Jagannath Temple is one of the must-visit places in Puri. The temple was constructed by the King Indradyumna in the 11th century AD. This temple is dedicated to three deities namely Jagannath, Balabhadra and Subhadra. An interesting fact about this temple is that the image of the deity Jagannath, which is made up of woods is religiously replaced after every 12-19 years with an exact replica. During the rath yatra or the chariot festival, the three principal deities are decorated and installed in temple cars or rath and taken out in a procession during the month of June-July.

Lakshmi Temple is located close to the Jagannath Temple and is a very significant temple as far as the Hindu religion is concerned. Legend has it the when Lord Shiva married Goddess Parvati, Goddess Lakshmi had invited them to this temple in Puri. The beautiful architecture and the location of this temple make it one of the best places to visit in Puri.

Loknath Temple is an 11th-century temple located close to Jagannath Temple in the holy city of Puri and is dedicated to Lord Shiva. Legend has it that the Shiv Linga was installed here by Lord Rama. An interesting fact about this temple is that the Shiv Linga is always underwater which indicates that the Ganga flows on through the top of the Linga, just like it flows out the top of the Lord himself.  Saranti Somvar Fair is a famous festival celebrated here in a grand manner and the devotees believe that the Lord has the power of curing all their sufferings. All these facts make Loknath Temple one of the most important places to visit in Puri.

The destination of the famous Rath Yatra, Gundicha temple is a very prominent Hindu temple in Puri. During the Rath Yatra, the temple is thronged by hundreds of deities to pay obeisance to Lord Jagannatha, Balabhadra and Subhadra, whose images are installed for 9 days in this holy temple. The beautiful temple stands in the centre of a garden and is surrounded by high-raised walls all around. The temple is built in the Deula style using light-grey sandstone. Gundicha temple is also known as God’s Summer Garden Retreat since it is built inside a garden. Visit this enchanting temple during your Puri tour and admire its beautiful architecture.

Markandeshwar Temple is an artistically and aesthetically built temple in the sacred city of Puri. Legend has it that this is the place where sage Markandeya meditated on the Hindu deity Lord Shiva. There is also a Markandeshwara Tank near the temple and the water from the tank is used for ritualistic purposes. Ceremonies like Pind Daan, Mundan Kriya etc are done near the tank and its waters are used for these purposes as well. The temple is adorned with beautifully carves structures of Lord Shiva, Nandi, Goddess Parvati and Lord Ganesha which makes it one of the most sought-after places to visit in Puri.

This 15th-century tank in Puri is one of the largest in Orissa that is dotted by numerous big and small temples along the shore. In the centre or the lake, there is an island with a temple called Chandana Mandap. If you love to spend some time in a calm and serene place, Narendra Tank is one of the best places to visit in Puri.

If you admire art and craft and love watching beautiful sculptures being built by the talented sculptors who magically create such an astounding piece of art, walk into Sudarshan Craft Museum in Puri without a second thought. Established and run by the very famous Sri Sudharshan Sahoo, this museum displays his immaculate sculptures created by this maestro. A true paradise for art lovers, this museum gives you a glimpse of how this intricate craft is used to build life-size sculptures. Do not forget to include this amazing place in your Puri sightseeing itinerary!

Chilika Lake is the second largest brackish water lagoon in the world and also one of the most popular Puri tourist places to visit. It is also an abode to a number of threatened animal and plant species as well as to innumerable migratory birds such as flamingoes, that visit this lake during the winters. Chilika Lake is also famous for the astounding view of sunrise and sunset that you can witness from here. You can also visit Bird Island, Honeymoon Island and Breakfast Island, the famous attractions that you can visit while visiting Chilika Lake.

One of the most beautiful beaches bordering the Bay of Bengal, Puri Beach is a favourite of devotees and tourists who flock this city for pilgrimage or a Puri tour. Witnessing sunrise and sunset from Puri Beach’s shore is a spectacular experience that you cannot miss. Also, people throng this beach to take a dip in the blue waters of the sea as they believe it will purify them of all sins. The golden sand along with the gushing waters make you feel tranquil and calm.

A paradise for artists and art lovers, Raghurajpur is one of the most amazing places to visit in Puri. You can witness the Pattachitra paintings, an indigenous art form of Odisha, and others like engravings on palm leaf or wood, intricate stone carvings and more. You can also watch the Gotipua folk dance which considered a predecessor to Odissi. Raghiurajpur village is also the only place where decorations for Lord Jagannath’s throne is designed. All these make this village a must-visit place in during your Puri sightseeing to get a glimpse of the wealth of art and craft this city possesses.