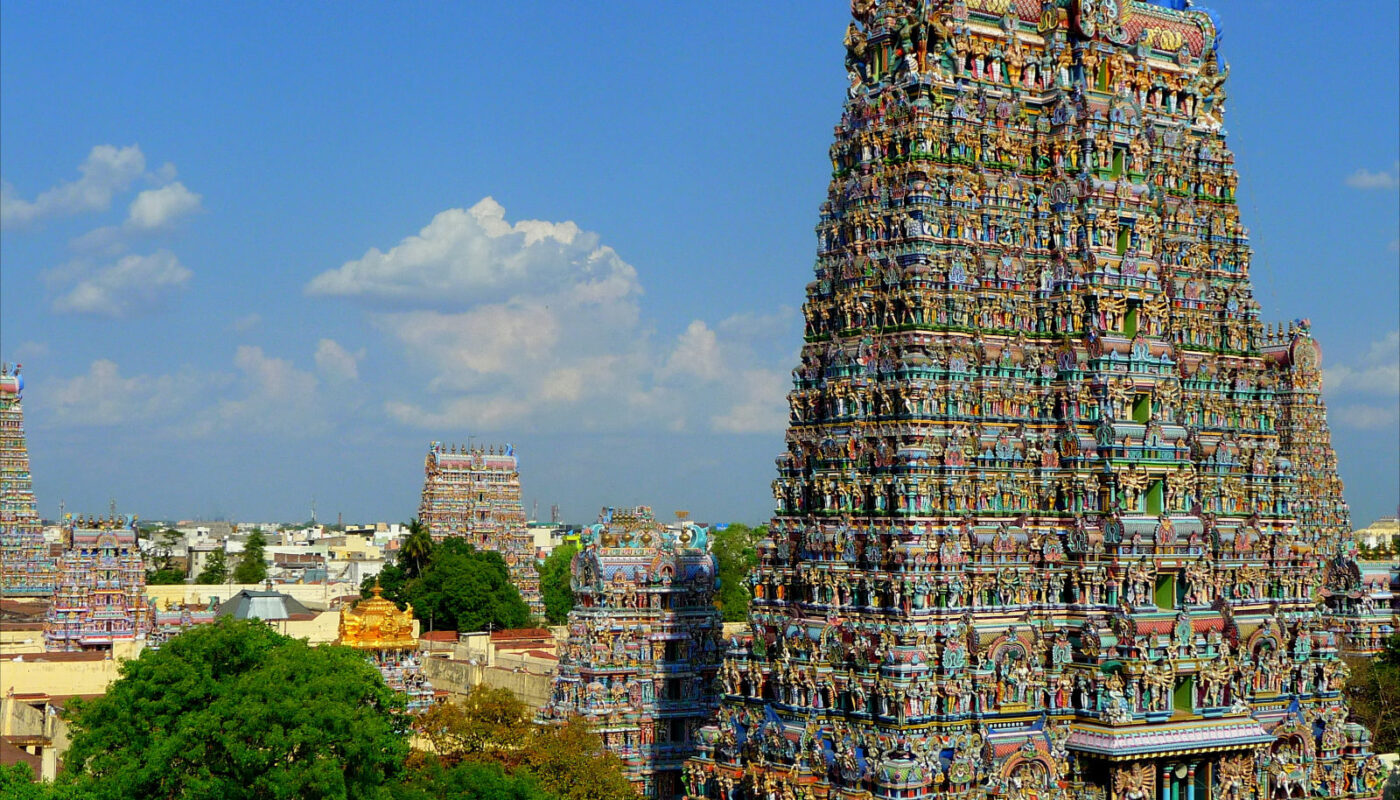 Madurai, in the South Indian state of Tamil Nadu, is an energetic, ancient city on the Vaigai River. The 14 colorful gopurams (gateway towers) of Meenakshi Amman Temple dominate the city’s skyline. The Dravidian-style temple, which is covered in bright carvings of Hindu gods, is a popular pilgrimage site. Millions of people flock to the Chithirai Festival in April to celebrate Meenakshi and Lord Vishnu.

Vivacious, mythical, chaotic, and soulful—these are the best words to describe Madurai, a city steeped in Tamil culture. Locals refer to Madurai as “the city that never sleeps.” It is well worth a visit. As you enter the city, expect bright colours and the tingle of temple bells to take over your visual and aural senses. In Madurai, there are numerous places to visit, including temples, churches, and palaces. It is a one-of-a-kind location where the old and the new coexist. The ancient structures of the many temples and other architecture that adorn the city’s skyline are enough to make modern skyscrapers fade away.

Despite being steeped in traditional Tamil culture and history, IT and urban development have forayed in and coexisted peacefully. Madurai’s history dates back to the third century BC and is mentioned in the works of Arab, Roman, and Greek travellers, including Megasthenses. Today, it is one of South India’s major centres for promoting Tamil culture and traditions through Sangams. The Pandayas and the Nayaks have ruled the city. Over time, the city has evolved into a cultural hotspot, attracting thousands of tourists all year. Madurai is a tranquil and graceful city where you can lose yourself in the streets and embark on a journey to discover the divine.

The city’s strategic location in Tamil Nadu makes it an ideal weekend getaway for South Indians. Madurai, with its many colours, charms, and eccentricities, will undoubtedly make your tour memorable. The experiences of visiting the city’s numerous religious shrines, whether it’s the famous Meenakshi Temple, the Koodal Azhagar Temple, the Kalamegaperumal Temple, or the St Mary’s Cathedral Church, will make you feel a lot more blessed. The Sri Meenakshi Temple is one of the most well-known places to visit in Madurai. The temple, dedicated to Goddess Meenakshi, a form of Parvati, is a work of art.

Built in the Dravidian architectural style, it awes pilgrims and travellers who pay homage here to fill themselves with satisfaction and gratitude. Other attractions in Madurai include the Koodal Azhagar Temple, Alagar Koil, Vaigai Dam, Gandhi Museum, Idaikattur Church, and the pottery village. We have compiled an extensive list of places to visit and things to do in and around Madurai in our Madurai Travel Guide. Our Madurai travel guide has it all, whether it’s worshipping the Goddess at the Meenakshi Temple or the deities at the ISKCON temple, spending a day at Tirumalai Nayak Palace or visiting St. Mary’s Church.

HOW TO REACH MADURAI

By Air Madurai airport is only 10 kilometres from the city centre and is well connected to all major cities in India.

By Train There are direct trains from many cities in India. The nearest railway station is Madurai Junction.

By Road Madurai is well connected to the rest of southern India.

Places to Visit in Madurai and Nearby

Madurai is a must-see for those who want to immerse themselves in authentic Tamil culture. Whether it’s visiting the numerous temples and churches, getting lost in the narrow alleys, or haggling with shopkeepers in its colourful bazaars, the places to visit and things to do in Madurai are almost limitless.

The Sri Meenakshi Temple is almost synonymous with Madurai and is probably the most popular place to visit in the city. Goddess Meenakshi (a form of Parvati) and her consort Sundareshwarar (Lord Shiva) are the presiding deities here. The temple is a magnificent piece of Dravidian architecture. It is surrounded by four gopurams and houses nearly 33,000 sculptures. The hall of a thousand pillars is a magnificent structure that is well worth seeing.

The Mandapam, located within the Meenakshi Temple, houses nearly 1000 intricately carved pillars that uphold exquisite Dravidian architecture. This exquisite work of art was created from a single rock. The monument, which is maintained by the Archaeological Survey of India (ASI), leaves every visitor in awe of its beauty. There is a Temple Art Museum, which documents the shrine’s thousand-year history.

The temple is dedicated to Koodal Azhagar (Lord Vishnu) and is located in the heart of the city. It is the pinnacle of the Dravidian architectural style. The religious shrine is thought to have been built thousands of years ago by the Pandyas, with later additions made by the Vijayanagar Empire and the Madurai Nayaks. The Vaishnavite sect holds high regard for the temple, which is one of 108 Divyadesam.

The Alagarkoil Temple and Shrine is about 21 kilometres from Madurai’s centre. The shrine is situated atop a hill, Alagarmalai, and is surrounded by the ruins of a fort. The impressive tower at the entrance is thought to have been constructed by the Pandya Kingdom. The Kalyana Mandapam and its pillars are examples of Nayaka art. The temple’s presiding deity is Paramaswamy, who is accompanied by his consort Kalyana Sundaravalli.

The museum is housed in the famous 17th century Tamukkam Palace, which belonged to the Nayak Dynasty. It is one of India’s most dedicated Gandhi Sangrahalayas. The exhibits include many of Mahatma Gandhi’s personal belongings. This includes a piece of his blood-stained loin cloth, which he was wearing at the time of his assassination.

The Thirumalai Nayakar Mahal is a major historical site and a popular tourist destination in Madurai. Thirumalai Nayak of the famous Nayak Dynasty built the palace in the mid-17th century. An Italian architect designed the palace, which is an exquisite blend of Dravidian and European architecture with a subtle influence of Indo-Saracenic style.

St. Mary’s Cathedral Church is a significant religious site in Madurai. The church, built in the Roman style of architecture, has an imposing structure that awes visitors. The temple is distinguished by its European architecture on the outside, while the interiors are distinctly Indian, with brightly coloured walls. It has one of the most beautiful cross stations, as well as an incredible Christ in three-dimensional glass coffin and a statue of Our Lady of Perpetual Suffering.

Teppakulam literally translates to “temple pond,” which is primarily used for devotional festivals. It’s a massive square-shaped tank that covers an area of 16 acres. The tank was built in 1646 by King Thirumalai Nayak. An idol of Lord Vigneshwara is installed on a platform in the centre of the tank. Vandiyur Mariamman Teppakulam, one of Tamil Nadu’s largest temple tanks, is a popular tourist destination.

The Kalamegaperumal Temple, one of the most important Hindu religious shrines in Madurai, is located in Melur, and the temple’s presiding deity is Lord Vishnu. The temple is one of the 108 Divyadesams, and Lord Vishnu is worshipped as Neelamegha Perumal, with Lakshmi as Tirukannapura Nayagi as his consort. The temple, which is over 2000 years old, is another example of Dravidian architecture.

The Idaikuttur Church is a prominent religious shrine in Tamil Nadu, located 36 kilometres from the main city on the Madurai-Rameshwaram Highway. A French missionary built the church in 1894 at the request of a lady of the same nationality. The church, which is dedicated to the Roman Catholic sect, attracts many devotees and visitors throughout the year. A visit to the church, which is built in the typical Gothic style, will make you feel more blessed.

The Sri Ramana Mandiram is a sacred site dedicated to the Tamilian Hindu Sage Sri Ramana Maharshi and is located very close to the Meenakshi temple. The shrine is built on the site of Maharshi’s former home, where he lived for a time before attaining enlightenment.

Though ISKCON temples can be found in almost every major city in India, this one is a little smaller than those in Bengaluru and Ahmedabad. Despite this, the temple is still praised for its architectural marvel, and many devotees flock to the shrine to seek divine blessings.

Puthu Mandapam is a thriving commercial district, with both traders and customers thronging the shops. Puthu Mandapam is the place to go if you want to shop like a local Maduraiite. The structure on which the shopping complex now stands was built in the 17th century by the rulers of the Nayaka Kingdom. The mandapam has evolved into a massive shopping complex over time.

Another interesting and popular tourist destination in Madurai is the banana market. Whether you like bananas or not, you should go to this market to get a completely different kind of experience. Bananas are available in 16 different varieties at the market. Needless to say, you are free to sample as many bananas as you want. You can end up buying as many as you want, both raw and ripe.

Choose a one-day guided tour of Villacherry Village, also known as the Pottery Village. Villacherry, sunburned and sleepy, resembles any other archetypal Indian village. Interact with the villagers and watch them transform into creators as they fashion potteries with dexterity. A visit to the Villacherry Pottery Village will leave you completely satisfied.

The Samanar Hills, located in the village of Keelakuyilkudi, 12 kilometres from Madurai, is one of the city’s major attractions. The Samanar Hills are a stunning combination of history and nature. The hills, which are preserved by the Archaeological Survey of India, are an interesting site to visit that provides a glimpse of South India’s historical richness. The hill’s main attractions are two sculptures, Settipodavu and Pechipallam.

ChaloGhumane.com > Tamil Nadu > Madurai > 18 Best Places to Visit in Madurai and Nearby