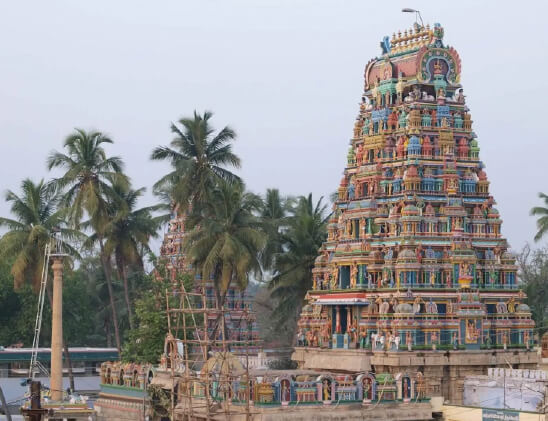 Tiruppur, also known as Tirupur, is a city in Tamil Nadu, India. Tiruppur is the administrative capital of the Tiruppur district and Tamil Nadu’s sixth largest city and urban agglomeration. Because of its exports, Tiruppur is a key source of foreign exchange for the country. Tiruppur is well-known as a prominent manufacturer of hosiery, knitted garments, casual clothing, and sportswear. The city is responsible for 90% of India’s cotton knitwear exports, valued an estimated $1 billion.

Best Places to Visit in Tiruppur

It’s a lovely area to visit for a day trip from Tiruppur. It has boating, a wonderful spot to eat, and the journey there is spectacular. You may either proceed to Udumalpet from Tiruppur or take the more internal and picturesque route via the villages. The drive is breathtakingly beautiful, with sunflower gardens, coconut trees, and rice fields along the whole way. This reservoir was built across the Palar River, which originates on the northern slopes of the Anamalai Hills.

The Indira Gandhi Wild Life Sanctuary is located at an elevation of 1400 metres in the Western Ghats region of Pollachi, Valparai, and Udumalaipettai. The sanctuary has an area of 958 square kilometres, with just 387 square kilometres being in the Tiruppur district. Tiruppur district includes Amaravthy Reserve Forest and a portion of Anaimalai Reserve Forest of Anaimalai Wildlife Sanctuary. It is home to a variety of wildlife, including elephants, gaurs, tigers, panthers, sloth bears, deer, wild bears, wild dogs, porcupines, flying squirrels, jackals, pangolins, civet cats, and birds such as rocket-tailed drongos, re-whiskered bulbuls, black headed orioles, tree pie, spotted doves, green pigeons, and others. Crocodiles abound at the Amaravathy reservoir in the Anamalais. There are also various visual attractions such as grass hills, waterfalls (Panchalingam), river streams (chinnar, tenar), teak woods, dams, and reservoirs (Thirumoorthy & Amaravathy).

The Amaravathy reservoir and its tributaries, the Chinnar, Thennar, and Pambar rivers, are home to South India’s biggest natural breeding population of Crocodiles. Mugger Crocodiles, also known as Marsh Crocodiles and Persian Crocodiles, are the most abundant and widespread of India’s three Crocodile species. They consume fish, other reptiles, small and big animals, and are occasionally deadly to people. Crocodiles (the mugger crocodile), which were previously common in Amaravathy, Periyar, and Chinnar, as well as most other perennial rivers, are now threatened with extinction. As a result, the effort of captive breeding of these crocodiles began in Amaravathy.

The goal of captive breeding crocodiles at Amaravathy, as well as other Crocodile Centres in Tamil Nadu, is to collect crocodile eggs from wild clutches, rear them in captivity, and then release the young crocodiles back into the wild to recover their status. The Amaravathy Sagar Crocodile Farm, built in 1976, is India’s largest crocodile nursery (captivity) and is just 90 kilometres from Tiruppur through Palladam and Udumalpet and one kilometre before the Amaravathy dam site. Many crocodiles of all sizes may be observed lounging in the sun and abruptly taking a step or piling up on one another. Eggs are taken from natural nests along the reservoir’s edge then hatched and nurtured at the Farm. Many adult crocodiles have been released into the wild from here. There are presently 98 crocodiles in captivity here (25 males and 73 females). The Centre is managed and maintained by three Forest Department employees.

The temple is a cultural gem of Tamils’ egalitarian ethos. Temples also display age-old riches of ancient values such as sculptures and arts, as well as the day-to-day activities of Triology in Tamil, i.e., literature, music, and drama. The government is eager on carrying out pooja and festivals in the style of our ancient culture and custom, carrying out the sacred mission of safeguarding the valuable properties of temples that have historical and aesthetic worth preserved by our forefathers over ages. Tiruppur district is home to a number of temples having historical and aesthetic significance. Some temples are located in the hills, such as Sivanmalai, Kaithamalai, Alagumalai, and Thirumoorthy malai, while others, such as Thirumurugan Poondi and Sukrieswara temple of Sarkar Periyapalayam, are conserved by the A S I (Archaeological Survey of India).

Temples and holy locations have been a part of our civilization since the dawn of humanity. Murugan, the son of Siva, is unquestionably the most popular god among Tamils. His significance may be observed in ancient writings such as the Tamil epic Silappadikaram. Millions of worshippers see him as the embodiment of knowledge, youth, chivalry, and beauty. His shrines are frequently built atop a mountain or on top of a hill. There are several myths that justify Murugan’s love of hills. One of them is his youngster, who is disappointed because he did not receive a ripe mango as a present from his parents. In a fun test, he and his brother Ganesha were challenged to a race across the cosmos for ruit. He lost the competition, gave up everything, and went to stand on a hill, refusing even his mother Parvathi’s appeasements. Thus, for the Tamils, Murugan shrines should be mostly placed on a hill.

Sivamalai is also known as Sivamamalai, Sivachalam, Sivathri, Sivasailam, Sivagiri, and Shakthi Sivamalai in modern times. The god is so strong because it is said to be the combined manifestation of Siva, Vishnu, Brahama, Murugan, Vinayaka, and Indra. Sivamalai has been given several titles in each “yuga” (the Hindu word for aeon). Panamalai. Vellimalai, Sembumalai, and presently Kamarupa Jothigiri in the Kali yuga. This sacred mountain has been there for a long time.

Once upon a time, the renowned saint Agastiyar came here to meditate but was unable to locate water. He appealed to Lord Muruga for assistance. Lord Muruga soon appeared in front of him and drove His lance (Vel) into the sand. Soon after, a spring of water erupted from the location. That location is known as “Uthukuli,” and it was eventually shortened to Uthukuli.

Nobody knows when the temple at Kaithamalai was established; all they know is its history. However, the temple was erected barely 200 years ago by some rural monarchs, and it was restored five years ago with the support of some benefactors, and it is now an important spiritual location in Tiruppur District. Every day, almost 200 people attend Uthukuli Murugan Temple. The important point to note is that only at Kaithamalai, i.e. Uthukuli, is the temple vehicle located on a hill, and worshippers drag the temple car up the slopes. There is no other spot in the world where a temple automobile is dragged up a hill. The God is then known as “Vetri Velayudha Swami,” and the Temple is known as “Kaithamalai Murugan Temple.” The Uthukuli Murugan Temple is located 15 kilometres from Tiruppur.

Avinashi is a small town in Tamil Nadu near Tirupur. The town is well-known for the Shiva temple built by Sundarapandiya, who was a close friend of the great Saiva saint Sundaramoorthy Nayanar. Avinashi is a Sanskrit word that meaning “invincible.”

This is one of the seven Shivastalams in Kongu Nadu, however it is most often known as the Karunaiyaaththaal temple. Inscriptions also allude to Avinashi as Dakshina Varanasi, Tiruppukkozhiyur, and other names. This shrine is mentioned in Tirumular’s Tirumantiram, Arunagirinathar’s Tiruppugazh, and Manikkavacakar’s Tiruvacakam. This temple is considered the first of the seven Thevara Stalams in Tamil Nadu’s Kongu Region. Inscriptions here show that the Cholas, Pandyas, and Hoysalas provided significant contributions to the temples. Sundaramoorthy Nayanar stopped at Avinashi on his route to see Cheramaan Peruman. As he walked down one of the streets, he heard two discordant sounds emanating from opposing buildings, one of which echoed joy and the other of which echoed grief. The saint, perplexed, realised what was causing the bizarre occurrence.

Two boys of the same age went to wash in a tank when a crocodile surfaced and swallowed one of them. The surviving youngster, now eight years old, was having his “Upanayanam” (thread ceremony) celebrated. As a result, there was laughter and pleasure throughout the house. While some were unable to handle their grief. They, too, would be celebrating their son’s “Upanayanam” if he were still alive. Sundaramoorthy Nayanar, deeply affected by this, poured out a passionate song, pleading with Lord Shiva to revive the dead child. His request was granted. The empty tank began to fill with water, and the crocodile emerged, ejecting the youngster as an eight-year-old fully grown boy.

Unlike in other temples, Ambal’s sanctuary is to the right of Avinasiappar’s sanctum. The Kasi Gangai Theertham—in the shape of a well—is deemed significant. In this temple, the Kaalabhairavar shrine is revered. Kaala Bhairavar is honoured here with Vadai Maalai offerings.

The vehicle festival is the most thrilling of the temple’s events. The vehicle at this temple is the second largest in South India and is known for its beautiful wooden carvings. The antique automobile has been reconstructed since it was damaged by fire in the 1990s. The annual Bhrammotsavam festival takes place in the month of Chittirai. Aside from the Temple Car Event, another noteworthy festival at this temple is 63 (Arubathi moovar Ula). The festival chariot here is considered to be comparable to Tiruvarur’s.

The name of the settlement is taken from the nearby Murugan temple. Tirupur’s expansion has reached Thirumuruganpoondi in the last eight years, and this hamlet will soon be absorbed under the greater appellation of Tirupur. The temple was built in the ninth century. The temple’s origins may be traced back to mythical antiquity. Soorapadma, the scourge of the gods, terrorised the heavenly world with his abrupt depredations and campaigns with his entourage of demons. Lord Siva was contacted by the oppressed gods, who begged him to rescue their lives. Lord Siva dispatched Lord Subramanya with a massive army led by the courageous Veerabhahu to annihilate Soorapadma and his entourage. Lord Muruga completed the difficult assignment.

However, he was burdened with the fatal sin of mass murder. To atone for his sins, he erected and worshipped a Siva Linga in Thirumuruganpoondi. Because Muruga worshipped Lord Siva, the latter was given the title “Thirumuruganathaswamy,” which means “Master of Muruga.” Sundaramurthynayanar, one of Saivism’s most revered saints, is also affiliated with the sacred place. He made a trip to the Siva shrines at Kongunadu. Now Siva, the Lord of Thirumuruganpoondi, who wanted to hear the saint’s melodies and compositions, disguised himself as a hunter and robbed him of all his belongings before disappearing into the temple. Sundaramurthynayanar’s anguish burst forth in the form of soul full song expressing his anguish and chiding the Lord of Thirumuruganpoondi that his divine presence in such a notorious place

Best Time to Visit in Tiruppur

The best months to visit Tiruppur are January and February.

How to Reach Tiruppur

Tiruppur Railway Station (Station Code – TUP) is part of the Salem Railway Division and is linked to cities like as Chennai, Bangalore, Coimbatore, Trichy, Madurai, Rameshwaran, Salem, Ernakulam, Mysore, Mangalore, and others.

All major towns and cities in Tamil Nadu, Kerala, Karnataka, and Andhra Pradesh are well connected by moffusil bus services. Old Bus Stand and New Bus Stand are the two main bus stops in the city.