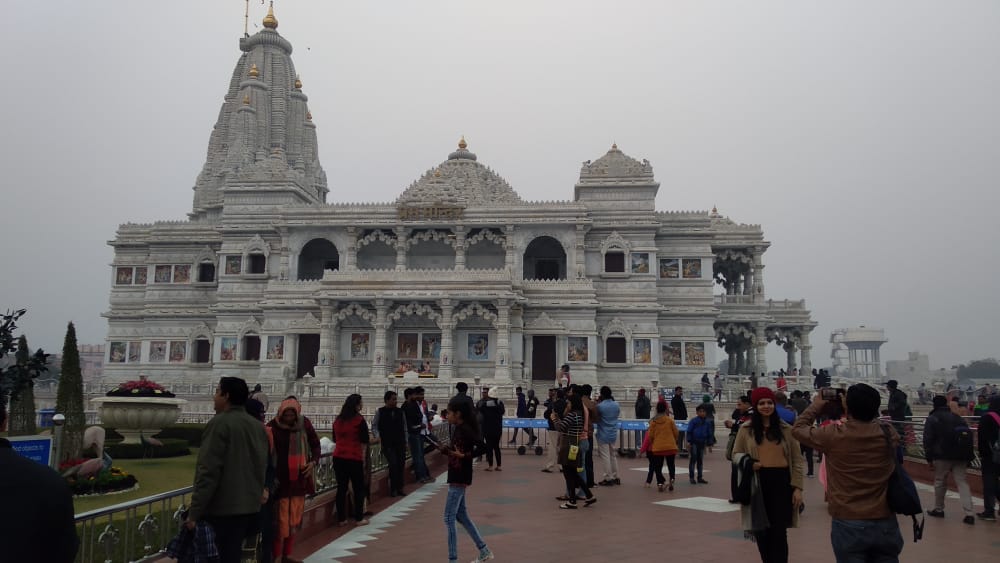 Mathura is a sacred city in Uttar Pradesh, India’s northernmost state. Lord Krishna is said to have been born on the site of the Hindu temple Sri Krishna Janma Bhoomi. The Yamuna River is dotted with 25 ghats (steps down to the water), the holiest of which is Vishram Ghat. Sati Burj is a memorial tower from the 16th century. The Dwarkadhish Temple has a carved entrance and a black-marble Lord Krishna idol. Mathura, the birthplace of Lord Krishna, is one of India’s most popular and serene spiritual destinations, dotted with temples and beautiful religious structures. Mathura has a rich history, which can be seen in the architecture and wide range of art on offer.

Best Time to Visit in Mathura

While it is best to visit during a festival to experience the true magic of this city, it is also a good place to visit from October to March. Aside from religious sites, there is the Yamuna River and markets to visit. Here’s a selection of some of the best places to visit in Mathura.

How to Reach Mathura

The nearest international airport to Mathura is in Delhi, 147 kilometres away, and the nearest domestic airport is in Kheria, Agra, 49 kilometres away. Taxis are available from both airports to the holy city.

Mathura railway station connects the city to major cities throughout the country, including Delhi, Mumbai, and Chennai. The railways are the most convenient and cost-effective mode of transportation to Mathura. To get to nearby locations, pre-paid taxis are available. From this point, rail services to all major cities are available on a regular basis.

Best Places to Visit in Mathura

The temple is thought to be Lord Shri Krishna’s birthplace and is the holiest place in Mathura. Other attractions include a marble statue of Lord Krishna and small shrines dedicated to various Gods and Goddesses. Try to visit during one of the major festivals, such as Diwali or Holi, to see the place at its best. The festivities begin at midnight with the birth of Bhagwan.

The temple, dedicated to Lord Krishna, is a must-see for its beauty and architecture. The entrance is designed in Rajasthani style, with an open courtyard in the centre, beautifully carved pillars, and a stunning painted ceiling.

The temple is also well-known for its spectacular swing festival, which takes place at the start of the monsoon season. Keep in mind that if you visit during the Janmashtami festival, you will see the temple at its best, though it may be a little crowded.

This popular attraction, also known as the Birla Mandir, is known for its beautiful structures and heritage. The 18 chapters of the Bhagavad Gita inscribed and illustrated on the temple’s pillars are one of the main attractions.

The red sandstone structure has many intricate carvings and, despite being on the outskirts of Mathura, it is one of the city’s most visited tourist attractions. Here you can also find idols of Lord Krishna, Narayana, Rama, Goddess Lakshmi, and Sita.

Vishram Ghat, the bathing and worshipping spot on the banks of the river Yamuna, is the most important of Mathura’s 25 ghats because it is believed that Lord Krishna rested on this Ghat after killing Kansa.

It is made of marble stone, has a large stone arch, and is surrounded by beautiful temples, providing a breathtaking view. The thousands of small oil lamps floating down the river during the evening aarti are the main attraction here.

This is where Radha used to go to collect flowers and meet Lord Krishna. Apart from its religious significance, this reservoir is a popular day trip destination for visitors to Mathura. Kusum Sarovar is 450 feet long and 60 feet deep, making it ideal for swimming.

The beautiful surroundings and tranquil atmosphere provide tourists with a complete getaway, and don’t forget to bring your camera because the views here are breathtaking.

Govardhan Hill, located near Vrindavan, is a popular destination for both devotees and tourists. The hill itself is mentioned in ancient Hindu texts, and it is thought that Lord Krishna used it to defeat Indra, the god of rain and thunder.

Aside from its spiritual significance, the sandstone hill stands 80 feet tall and provides breathtaking views of nature. There are also some art pieces on display, so take a look around.

The museum, also known as the Government Museum, was built in 1874 and houses a large collection of sculptures, pottery, paintings, artefacts, coins (in gold, silver, and copper), and other items from Mathura and the surrounding areas.

The museum itself, built of red sandstone, has some stunning architecture and is a great attraction for art lovers. Throughout the year, it is bustling with students and tourists alike.

In 2010, Wildlife SOS and the Uttar Pradesh Forest Department collaborated to establish a rehabilitation centre for severely abused captive elephants. Every elephant here has a storey about a difficult past, but here you can watch them spend their days happily – eating, walking around, and, best of all, splashing around during bath time.

A truly one-of-a-kind experience, you will leave knowing more about and appreciating these majestic creatures.

Kans Qila, or Kans Fort, is another major attraction in Mathura. It is located on the banks of the Yamuna River and is named after Lord Krishna’s maternal uncle. Apart from its religious significance, the fort is a regal piece of architecture with Hindu and Muslim architectural influences.

This market, also known as Holy Gate, is a must-see if you want to experience local life in Mathura. This vast market is alive and teeming with activity.

There are a variety of shops to browse through, and you can get a sense of the culture of this city by purchasing art, jewellery, and ethnic items. This market also has a number of religious stores where you can find idols of various gods and goddesses as well as paintings by local artists.

Combine a stroll through this bustling market with a visit to Gita Mandir, which is nearby. One of the most popular markets among locals, it’s a great way to see Mathura’s mix of old and new.

Vendors here will sell and bargain with customers for everything from mobile phones to pet supplies, but international brands are also available.

Mathura should be on your list of places to visit in India because it has a rich heritage, stunning structures, and beautiful religious sites.