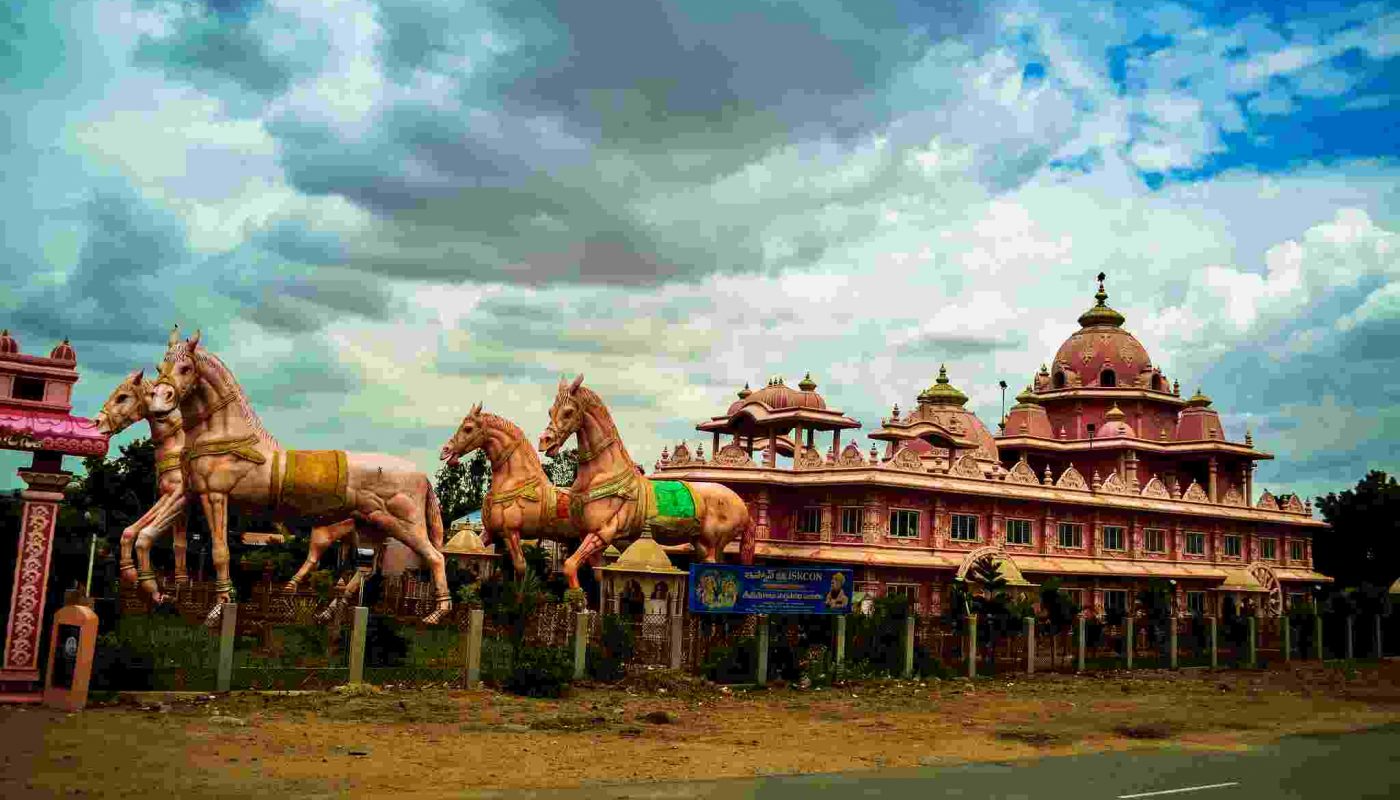 Anantapur, formally Anantapuramu, is a city in the Indian state of Andhra Pradesh‘s Anantapur district. It serves as both the mandal and divisional headquarters for the Anantapuru mandal and the Anantapur revenue division. National Highway runs through the city. Anantapur, Andhra Pradesh’s biggest district, is home to several historic sites that commemorate the state’s rich history. It is still significant now since it is known for silk commerce and helps to economic progress.

Best Places to Visit in Anantapur

Previously known as Gowthampuri, it was later renamed Gooty. The earliest inscriptions on the walls of this fort date back to the 7th century. As per the inscriptions, the place was called as Gadha meaning Fort while an inscription of Bukkaraya mentions this place as King of Forts.

Gooty Fort is one of Andhra Pradesh’s oldest hill forts. The fort was formed of granite boulders, and the domes were built with fine stone, mortar, and lime to ensure long-term viability. This fort, built in the shape of a shell, is really made up of 15 tiny forts with distinct gates. The outer wall with bastions joins all of the smaller fort’s gates. The fort also has two imposing structures, one of which is a gymnasium and the other is a barrack. Morari Rao’s seat is a polished limestone structure perched on the cliff’s edge.

The Gooty fort is a blend of Hindu and Islamic architecture. At the summit of the slope, many wells were dug. The fort contains various temples, including the Lakshmi Narasimha Temple, Nageswara Swami Temple, Hanuman Temple, Jyothimma Temple, and Ramaswamy Temple. Within the fortress, there is also a Dargah. On the fort’s higher level, there are various destroyed constructions.

The hamlet in Narpala Mandal is located 29 kilometres from Anantapur and is nestled among the Mutchukota Hills. It is famous for its Moharum Festival, and the saint is known as Sri Kullai Swamy. Barren women who visit the shrine are supposed to become fruitful. On the night of the 11th of Moharrum, a fire walking ceremony is held. Sri Anjaneya Swamy Temple is also close to Sri Kullai Swamy Chavidi’s home.

The hamlet is located 14 kilometres from Hindupur Town in Lepakshi Mandal. This is a well-known pilgrimage site recognised for its Veerabhadra Temple and the massive stone “NANDI” that lies nearby. The location is also related with Lord Sri Ram’s travels. The Temple is a real work of art in terms of sculpture and architecture. On “SHIVARATHRI” and other saivite festival days, a large number of pilgrims visit the site.

The temple of Nettikanti Veera Anjaneya Swamy is located around 4 kilometres north of Guntakal. Hindu pilgrims from Anantapur, Kurnool, and Bellary districts converge here in great numbers, particularly on Saturdays, to worship the god as well as perform weddings and tonsure rites. Even Muslims from the neighbouring communities come to pay their respects to this divinity. On the day following the Telugu New Year, a massive parade is held once a year.

This location is 5 kilometres from Tadpatri and is famous for the Sri Ranganatha Swamy Temple, which was erected on the summit of the hill in 1330 by Yerramaraju, a Bukkarayalu chieftain. A waterfall with a year-round spring is nearby. Because of the picturesque splendour of the area, it is not only a pilgrimage site but also a picnic location. Thousands of pilgrims visit the site every year to celebrate weddings and religious rituals. The annual Brahmostavam Festival held on Chitra Suddah Pournima (usually in April), draws a large crowd.

This location is approximately 21 kilometres south-east of Kadiri. There is a Banyan Tree, possibly the largest of its kind in the South, with branches spanning about 5 acres. It is commonly known as “Thimmamma Marrimanu” after the name of Thimmamma, who is supposed to have committed ” Sati” in 1434 A.D. at this location, where this Banyan Tree bloomed.

This community is located on the banks of the Chitravathi River, approximately 29 kilometres from Penukonda. It is Puttaparthy Sri Sathya Sai Baba’s residence, attracting ardent devotees from all over the world. Prasanthi Nilayam (an Ashram) was built by the Devotees. The Baba is said to have sharp abilities. A great number of devotees attend the place during Sivarathri, the Baba’s birth day, and especially during Dasara. On festival days, a magnificent mantapa called “Poornachandra” is built, where a huge number of Baba devotees congregate and conduct “Bhajana.”

Penukonda was an early capital of the Vijayanagara kingdom, and the fort was impregnable at the time. The two most notable features in the fort are the “Gagan Mahal,” the monarchs’ summer retreat, and the “Babayya Darga,” a magnificent example of community hormony. Kumbakarna garden was 5 acres in size here. It contains a massive statue of the sleeping Kumbakarna, measuring 142 feet long and 32 feet tall, into whose cavernous belly one may enter. Several asuras are seen attempting to rouse the sleeping Gaint.

Anantapur is 140 kilometres away, while Hemavathi is 140 kilometres away. It is well-known for the Doddeswara Swamy temple, which was established during the Pallava reign. When stuck, the stone used to make the idols sounds like metal and is also beautifully polished. At the entryway is an 8-foot-long and 4-foot-tall Nandi constructed of black basalt rock. Inside the sanctum sanctorum, there is a 6-foot-tall Lingam. Other temples devoted to Lord Shiva may be found in the temple vicinity, including the Siddeswara Swamy temple and the Mallikarjuna Swamy temple. In the back, there is a museum with rare idols of historical significance on exhibit.

Gooty fort is beautifully placed 52 kilometres from Anantapur on a hill at a height of 300 metres. It is one of the state’s oldest hill forts. The fort was created during the Vijayanagara era and is unusual in that it is built in the shape of a shell with 15 main entrances. It is notable for the water resources that are accessible at such a height.

Chintala Venkataramana Temple is located in Tadipatri town, 52 kilometres from Anantapur. The Bugga Ramalingeswara Temple, located 1 km from Tadipatri town and overlooking the Penna river, is notable for a Lingam on a pedestal that is continually replenished with water from a tiny spring.

Sri R.V. Chakravarthy, Head Master, Parishad High School, Konakondla, found the Jain Mythical cosmographical design of Jambu Dweepa etched on a stone on the summit of the hill Alchemists at Konakondla village in Vajrakarur Mandal in 1966. Pilgrims, particularly south Indian Jain pilgrims, are drawn to this Jambu Dweepa, which is 70 kilometres from Anantapur and 10 kilometres from Guntakal Railway Station. The Kambam Narasimha Swamy Hills, Rasasidda hilltop, and Kari Basappa hillock are nearby. On Rasasidda hill, there is a Thirthanka Temple with idols of Thirthankaras (high priests). This might be from the 13th century A.D.

Kadiri is the sacred sanctuary where Lord Vishnu first set foot and gave the Utsavamoorthis to Brugu Maharshi for daily devotion. During Dassera and Sakranthi, special Poojas are done. The Temple is linked to various holy thirthas.

Museum of Chaitanya Jyoti, The Chaitanya Jyoti Museum, which displays all stories and happenings from Sai Baba’s early childhood, is one of the most magnificent monuments in Ashram. Visitors are introduced to Sai Baba’s holiness and divinity through multimedia presentations and other means. The edifice, too, is a superb example of architecture and design, combining Chinese roofs, Moorish spires, Gothic arches, and Japanese and Thai forms. Art-ong Jum Sai, a NASA scientist, developed the museum. The major draw of this city is the holy residence of Sathya Sai Baba, known as ‘Prashanti Nilayam,’ which literally translates as ‘the abode of calm.’ The ashram has drawn tourists for centuries and continues to do so throughout the year, representing one of the most unusual and recognised religious groups in the world, making the town a vital spiritual centre.

The ashram is home to huge and attractive educational institutions, stadiums, museums, hospitals, and other contemporary amenities that appeal to all tourists. It can accommodate thousands of people at a time because it is a huge and complicated facility. There is also a set of norms and regulations that have been established and must be observed and obeyed by adherents. The assembly hall, where Sathya Sai Baba imparts his Darshan to devotees, is the most visible aspect of this ashram. A lovely shape, it has rewritten history with the influx of devotees on the eve of Sai Baba’s birthday. This ashram is the town’s highlight due to its calm, peaceful, and serene appearance. While at Puttaparthi, one should not miss this lively, expansive, and magnificent religious centre, which is nearly a city in its own right.

Witness devotion and spirituality in action as they assume the form and structure of functioning institutions and organisations.

Tholu Bommalata, which translates as “dance of leather puppets” (tholu – leather, bommalata – puppet dance), is a popular style of shadow puppetry in the state of Andhra Pradesh.

The puppets are constructed of goat skin and are brilliantly coloured. These leather puppets stand 5-6 feet tall and feature joints at the shoulders, elbows, knees, and, on occasion, the waist, neck, and ankles. Vegetable dyes have traditionally been used to colour the puppets. Chemical dyes, which are widely accessible nowadays, are also utilised to colour the puppets. Perforations are done on the puppet figure as needed, and the eyes are painted final. The puppet is held vertically straight by a thin bamboo stick connected to it. The puppets are operated by pressing them against a white screen. The shadow or picture is visible to the audience.

The shadow or picture is visible to the audience. The play’s themes are based on stories from the Ramayana, Mahabaratha, and Krishna legends.

Kattarupalli draws a large number of pilgrims because of the Yogi VemanaSamadhi, which is located 25 kilometres from Kadiri on the way to Thimmama Marimanu. The drive to this location provides breathtaking views of numerous rock formations. Yogi Vemana is popularly recognised as the people’s poet because his Telugu poetry is simple and colloquial, expressing the facts of everyday life and societal problems that are popular among both literates and illiterates. His poetry includes topics such as Yoga, knowledge, and morality. Vemana, as a poet, was known as the ‘Praja Kavi,’ which translates as ‘The People’s Poet.’

Best Time to Visit in Anantapur

The winter season, which begins in October, is the best time to visit Anantapur. The months of October to February are ideal for a visit since the weather is mild and the atmosphere is relaxing. This is also the busiest time for tourists.

How to Reach Anantapur

National Highway 44 and National Highway 205 of India’s National Highway network link Anantapuramu to the neighbouring major cities. It is connected to Bangalore by the NH–44, and to Chennai via Renigunta via the NH–205. Anantapur bus station is served by the Andhra Pradesh State Road Transport Corporation. The city has a total length of 298.12 kilometres of road.