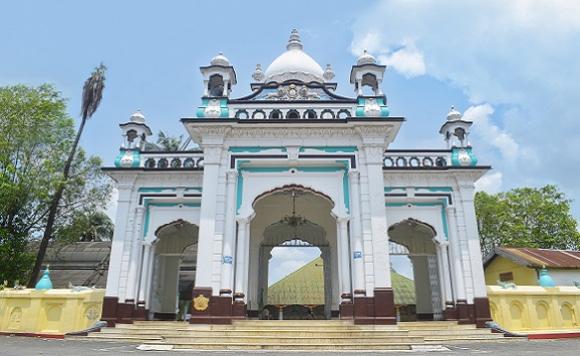 Barpeta is an administrative district in the Indian state of Assam. Barpeta is home to the district headquarters.

Best Places to Visit in Barpeta

With the advent of ShrimantaSankardeva, the Barpeta region gained immense religious significance. This prominent Vaishnava guru’s pupils established a significant number of Satras. Since time immemorial, these Satras have attracted large audiences from all throughout the state, particularly during festivals and anniversaries. Visitors to the Satras of Barpeta, Patbaushi, Sundaridiya, Sunpura, GanakKuchi, Satra Kanara, and Jania are common. Barpeta is divided into 22 Hattis, which are inhabited by the Gurus’ devoted followers and families and are administered by the Satra administration. This one-of-a-kind characteristic can only be found in Assam. Traditional Barpeta handicrafts such as ivory carving are well-known across Assam. Assam is well recognised for its indigenous firework industry. The brass metal company of Sarthebari is well-known around the world.

Barpeta is accessible by bus and train. The nearest railway station is Barpeta Road, which is 21 kilometres from Barpeta Town. National Highway No.31 connects Barpeta Road to the rest of Assam. It is located north of the district headquarters town of Barpeta. Howly links Barpeta to the National Highway, which is around 16 kilometres away. Buses run frequently between Barpeta and Guwahati.

On Barpeta Road, there is a tourist resort with an information centre. There is also a woodland lodge run by the tourist department. The tourist directorate organises visits to the Manas National Park. The park is best visited between November and April.

Some of the Important Place of Tourist Attraction

The Satra, which is located in the centre of the city, draws devotees from all over the state, especially around Holi, when the Doul festival is held, and on the anniversaries of several Vaishnava Gurus. The structures on the Satra campus are architectural marvels in their own right. The Kirtan Ghar is considered Assam’s biggest. ShrimantaSankardeva, Shri Madhavdeva, and Shri Badula Ata are honoured by the Three Guru Asanas at these structures. The two Satradhikars sit behind the Asanas and do Nam-Prasangas on a daily basis. A total of 20 Bighas of land is covered by a number of constructions.

Chinpara-Vithi is where SrimantaSankardeva landed from his boat at Barpeta on the banks of the PalangdiBori, which is now known as Palangdihati. The Saint stayed for six months in order to spread his beliefs. This location is roughly a half-kilometer north of Barpeta Satra. The Guru’s Namghar is still in existence.

This Satra, located near the town of Barpeta, had an essential role in the growth of Vaishnavism and reformation. Shri Madhabdeva created the Satra and wrote the “Bhakti Ratnakar” and “Namghosa” in the Satra’s original Vithi. During his stay here, the great saint dug a well that has been kept to this day, and the water from the well is considered holy. Shri Sankardeva, Shri Madhavdeva, and Shri Badula Ata are honoured with three Guru Asanas.

This Satra is located 2 kilometres north of the village of Barpeta. This Satra draws a significant number of devotees and visitors since it served as a cultural centre from which Satriya culture, art forms, and literature spread far and wide. Shri Manta Sankardeva, Shri Madhavdeva, Shri Damodardeva, and Shri Harideva were Vaishnava Gurus who stayed in the Satra to spread the Vaishnava faith. ShrimantaSankardeva stayed here for 18 years and wrote 240 Bargeets, Shastras (literary religious texts), and Ankiyanats (Dramas). The scripts have been meticulously maintained here. Recently, the government has made measures to preserve these gems of Assamese heritage, including plans to establish a ShrimantaSankardeva Museum on the premises of the Satra. The Damodar deva Satra is also housed on the same grounds. In honour of the saint, Ahom Ruler Paramatta Singha built a Math. This Satra lies around 2 kilometres from the town of Barpeta.

Sri Madhabdeva, the reformer who founded it, lived here for more than 18 years. Shri Ram Ata and Shri Ram Atoi’s vithis are also kept here. ShrimantaSankardeva authored a number of SachipatPuthis, which are preserved here. This Satra is within the jurisdiction of the Municipality of Barpeta.

Shri Madhabdeva created this Satra. The preachings of this renowned scholar had a significant impact on the common people. This Satra grew into a significant learning centre.

This Shiva Temple was built in the ancient times. Ahom King Shiva Singha gave land donations totaling around 760 Puras documented in Copper-Plate inscriptions at Dubi near Pathsala of Bajali Sub-Division and presented an image of Goddesses Durga. According to folklore, Queen Fuleswari, Shiva Singha’s wife, was important in inviting “Devadasis” or Temple dancers from Upper Assam to conduct dances for the deities of this Temple. This Temple is claimed to be the birthplace of the famous dance genre “Devadasi-Nritya.”

Back in the mediaeval time, Syed Shahnur Dewan, a follower of Muslim Sufi-Saint Ajan Fakir of Upper Assam, arrived and lived in the Bhella district to propagate the Sufi Philosophy of Islamic brotherhood. This mystic is supposed to have supernatural healing ability and to have cured Queen Fuleswari, wife of Ahom King Shiva Singha, of a pregnancy issue. After treating the Queen, the King bestowed land grants and other favours on the Fakir. Ahom King Chandra Kanta Singha also promised territory by the issuance of Copper-Plate inscriptions, which were destroyed during the 1824 Burmese invasions.

Shri Narayan Das Thakur Ata, a student of ShrimantaSankardeva, arrived to give his devotion, which was reported to have been formed by certain cow herds (Gorokhia). This Than’s structure is reminiscent of Kirtanghar in Barpeta Satra. The Than is a 25-Bighas region where the Doul festival is held yearly with much pomp and magnificence.

In 1990, it was designated as a national park. Manas National Park is located in the Himalayan foothills and has a diverse bio diversity as well as stunning scenery. It was one of the first reserves to be put in the tiger reserve network as part of Project Tiger in 1973. With a total size of 2837 square kilometres. The Manas River passes through the park, which has the most protected species in India, including tiger, leopard, civet, elephants, buffalo, pygmy hog, golden langoor, Assam roof turtle, and Bengal florican. This park was designated as a site of international significance by UNESCO’s World Heritage Committee in 1988, as well as a Biosphere Reserve in 1989. There are 60 mammal species, 312 bird species, 42 reptile species, 7 amphibian species, 54 fish species, and over 100 insect species. The location is accessible by road from Barpeta Road (20 kilometres), which links to National Highway No. 31, which connects to the rest of India.

The trains link Barpeta Road to the rest of the country, while the Gopinath Bordoloi airport in Guwahati is almost 160 kilometres away. The forest lodges are located within the park at Mathanguri, which is 40 kilometres from Barpeta Road. Visitors must acquire permission to enter the park from the Field Director Manas Tiger Reserve on Barpeta Road.

Sarthebari town is in the district known for its domestic brass metal industry, which is located in the district’s easternmost corner. This sector employs a large number of Assamese households and specialises in the production of Sarais, Bota, Ban-Batis,Thals,glasses, and other traditional Assamese items. These utensils are a one-of-a-kind addition to Assamese heritage and culture that has been passed down for a long time. The craftsmen are finding it very challenging to maintain the industry due to the rising cost of raw materials that must be imported from other states.

The main rivers of Barpeta, including the Manas, Beki, and Brahmaputra, have visual splendour that will appeal to both environmentalists and visitors. The views from the National Highway No. 31 bridges across Beki and Manas give a panoramic perspective of natural splendour. A trip to the Baghbar hills also provides a beautiful glimpse of the mighty Brahmaputra. However, in order to attract tourists, infrastructure amenities must be established.

Best Time to Visit in Barpeta

From late October to early March is the finest time to visit Barpeta.

How to Reach Barpeta

Barpeta is a country rich in culture and tradition, and it is a must-see for everyone visiting Assam. The town is well linked by all modes of transportation, and a large number of devotees and visitors visit this location practically all year. Travel to the location can be done by plane, road, or rail, depending on what is most convenient for the individual.

If you’re flying, take a trip to Guwahati, which is around 98 kilometres from Barpeta. Taxis and private vehicles are readily accessible from the airport to transport guests to the town.

To go to Barpeta, take the train to Guwahati Railway Station and then use any local mode of conveyance. Local rail services from Guwahati to Barpeta are also available, which operate both in the morning and in the evening.

On the route between Barpeta and Guwahati, there are several private buses. Small cab services are also readily accessible, transporting travellers to various destinations for sightseeing.