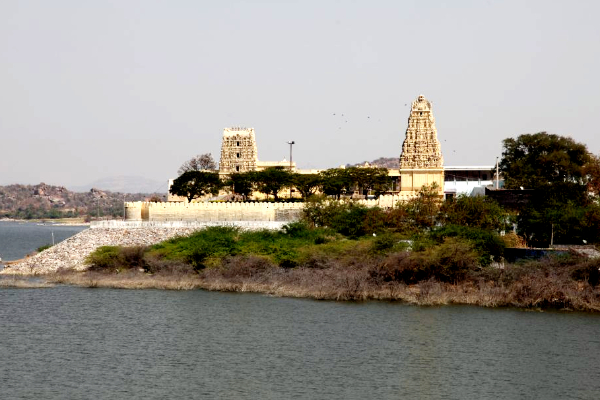 Best Places to Visit in Wanaparthy

The Ghanpur Fort is a hill fort erected by King Gona Ganapa Reddy in the early 13th century on a rocky slope. He governed this territory as a feudatory of the Kakatiya monarchs. Gona Ganapa Reddy is the son of Gona Budda Reddy, the poet of the Ranganatha Ramayana, a seminal work of Telugu literature.

Pangal Fort is a well-known hill fort in Telangana. It was constructed during the 11th and 12th centuries by the Kalyani Chalukya Kings. The fort spans hundreds of acres and has Seven Gateways. The main entrance is known as Mundlagavini and is a unique feature of this fort. It was constructed using massive granite rocks.

Wanaparthy Samsthanam, also known as the Raja of Wanaparthy, was a vassal of Nizam of Hyderabad. He was in charge of Wanaparthy’s feudatory. It was one of three major samsthanams, the other two being Gadwal and Jatprole.

Sarala Sagar Project, one of Telangana’s oldest projects, has resurfaced as a result of the Mission Kakatiya Phase-III operations being carried out there at the moment, with the State government spending Rs 2.30 crore on desilting and guide wall maintenance. Sarala Sagar Dam is the world’s second-largest dam using Siphon Technology. Dams have been a requirement in areas where agriculture is the primary source of income. When dams are fueled by cutting-edge technology, their significance grows. The Sarala Sagar Dam Project is one example of a project that has integrated Californian technology. The project is an exceptional example of modern dam science and technology development in India.

The Sarala Sagar Dam Project, located in Telangana’s Wanaparthy District, is just a few kilometres off the Hyderabad-Bangalore National Highway -7. It is around 6 kilometres from the Kothakota Mandal Head Quarters. The main source of water for this irrigation project is the Krishna River. Raja Rameshwara Rao, the creator of the innovative technology-based dam, was a Wanaparthy ruler. The project is titled ‘Sarala,’ after his mother. On September 15, 1949, the project’s foundation was laid. General Sri J.N Chowdary, the military governor of Hyderabad, officially launched the project. Raja Rameswar Rao ensured that the technology used was the most modern available, therefore it was brought from California in the United States. The project, however, had been put on hold for an undetermined period of time until being restarted in 1959. The project benefits by irrigating a large amount of agricultural land in the district of 4000 acres.

The Sarala Sagar Project is the live example of the benefits experienced by the use of new and advanced technology in the infrastructure building. Located about 6 Kms away from KothakotaMandal Head quarters on National Highway No. 7 from Hyderabad to Kurnool. The primary technology implemented in the project is the automatic Siphons system which is a very rare and unique system. The system is unique to Asia and the implementation in the project is the second project in the world. The technology can be put in brief: There are 17 siphon hoods and 4 primary siphons that are being used in the project. The siphon system automatically opens once the water levels exceed the capacity. The project attracts many tourists to the place. Architects and students of civil engineering also come here for research and study.

Best Time to Visit in Wanaparthy

January and February are the finest months to visit Wanaparthy for a vacation or to travel.

How to Reach Wanaparthy

Reach to Wanaparthy from Hyderabad by train :

Reach Wanaparthy from Hyderabad by Drive/Car/Bus:

Reach Wanaparthy from Hyderabad By Air

The nearest airport (about 120 kilometres) is Rajiv Gandhi International Airport (Hyderabad airport). You may take a private cab or taxi to get to Wanaparthy from here.