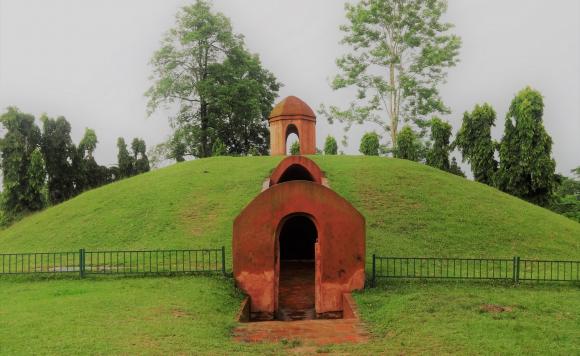 Best Places to Visit in Charaideo

The Themaidams in Charaideo make the neighbourhood a popular tourist attraction. The maidams, which are similar to Egypt’s pyramids, are really burial places for Ahom Kings and Queens. They are wonders viewed through the spectacular architecture and expertise of Assamese artists and masons of the mediaeval age. The region also has old ruins and antiquities, which contribute to its lustre.

Dilighat is located at the Namrup-Borhat boundary on the banks of the river dilhi or disang (a tributary of the mighty Luit or Brahmaputra). During the winter, it has become a popular site for picnickers. The region’s wonder is enhanced by the construction of a hanging bridge across the river. The bubbling waters of the river, surrounded by nature on all sides, provide a wonderful mix for providing travellers with much-needed rest.

Haridev Sri Sri Bornamghar was founded in 1662 in honour of MahapurushHaridev, the Great Saint of Assam who made significant contributions to social upliftment. Throughout the year, many people come to this almost 300-year-old religious institution to pray for their well-being. The CholapatharShyam Gaon Buddhist Monastery is Assam’s oldest Buddhist temple. The most lovely time to visit is during the Sangken Poi festival, which takes place in April. The Monastery also has a library with valuable books and antique manuscripts. This museum is a paradise for historians, including literature written in ancient Pali, Tai Ahom, and other languages.

Borhat Bazar was historically recognised as a site to get mineral salt during Ahom reign. Borhat is derived from the words Bor (large) and hat (hatter) (meaning market). There was a market where salt could be purchased. Because Assam lies far from the seas and people had to rely on mineral salts, salt was regarded extremely valuable during Ahom’s reign. Although it is now a regular weekly market, its historical significance persists, making it a prominent tourist site inside the Charaideo region.

BorpatraPukhuri/Raja Pukhuri is located on the northern side of old Dhodar Ali, approximately 2.5 kilometres east of Sonari. According to the residents, Ahom King SwargadeoGadadhar Singha delegated the job of excavating a pukhuri to BorpatraGohain as a sign of respect for his “Pehi” (aunt), and so it became known as “BorpatraPukhuri.”

Later, the British dubbed it “Raja Pukhuri” since it was excavated on the instructions of the Ahom Raja. The exquisite tea gardens have long been a sight to behold for visitors. Assam black tea has established a firm foothold in the worldwide market. Many people rely on tea gardens for a living, and watching the workers harvest tea leaves is a quiet and relaxing experience in the middle of greenery.

Best Time to Visit in Charaideo

The monsoon and winter seasons are ideal for vacations here since the lovely weather makes your journey even more pleasurable.

The nearest airport is Dibrugarh’s Mohanbari Airport, which is about 83 kilometres by road from the district headquarters, Sonari.