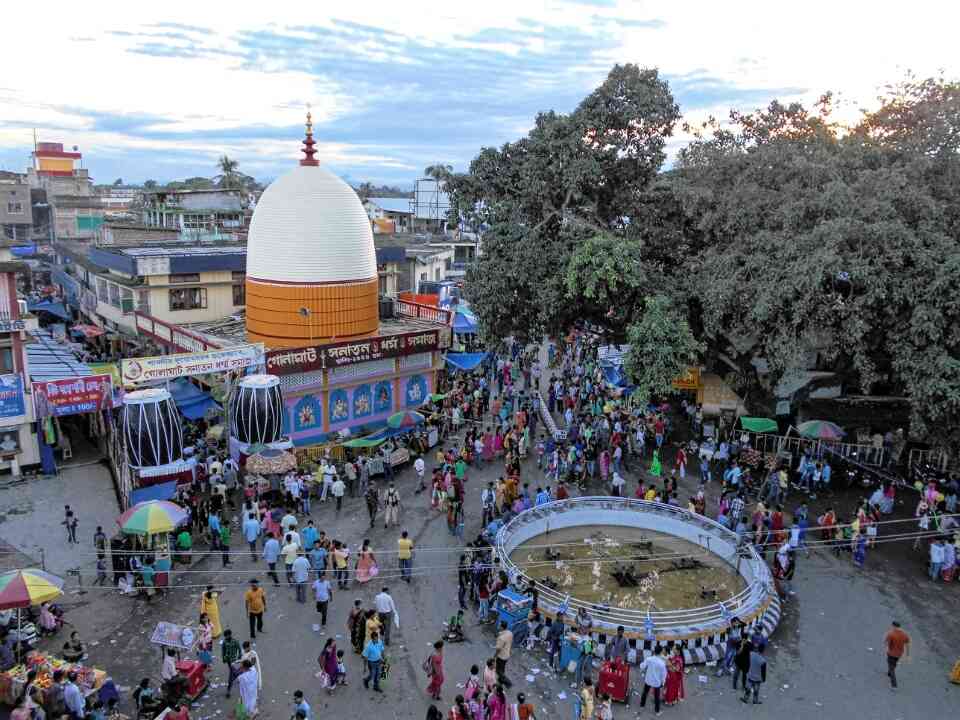 Golaghat, one of the largest subdivisions of the Indian state of Assam, was elevated to the status of a full–fledged district headquarter on 5 October 1987. It is a city and a municipality, as well as the administrative headquarters of the Golaghat district. It is also a twin city to Jorhat, which is about 55 kilometres away.

Best Places to Visit in Golaghat

ASI maintains a historic Shiva temple dedicated to Lord Shiva. It was constructed by the Ahom kings. It is a popular picnic place surrounded by lush green tea plants.

The shrine of elderly mother alludes to Durga. Burha -Burhi refers to Siva -Parboti among the tribes (particularly the Kochari). It is located in Bagari along the N.H. 37. Though it is a modern temple, it is a wonderfully designed temple that was formerly known as “Sopa Khowa Sil.” There was just a stone, which people fervently adored as a deity. Otherwise, they were afraid of the same omen.

This is also the Durga temple, which was brought on a piece of ‘Kako’ bamboo. According to legend, there was a political crisis in Assam during the Ahom era in the 17th century. Sulikpha, the Ahom monarch at the time, was only a kid. The kingdom was thereafter controlled by his father-in-law, Laluksola Borphukan. On behalf of “Lora Raja,” the boy king. Borphukan began to maim the Ahom princess in order to make the throne safe for him, so that they would not be able to demand the throne according to custom. But the ruler of the Tungkhungia dynasty, Langi Gadapani aka Gadadhar Singha, escaped. Joymoti, his wife, was tortured and murdered. Gadadhar Singha absconded with the same golden idols of Devi Durga in his cloth bundle and inside the hollow piece of Kako Bamboo. He used to adore her.

He was relaxing one day under a “Am Tenga” tree, a type of acid fruit grown by “Naramara bill(lake)”. The king’s spies encircled him all of a sudden. He began by tossing one idol into the lake before fleeing. The locals then took up this idol and built a temple on the Diring River. Its location has since been altered. It is situated to the west of Bokakhat. Basanti Puza and Durga Puza are performed here.

However, it is destroyed due to an earthquake, a cyclone, or a fight, whatever the reason may be. An ‘Deopahar’ now notifies us about wrecks and ruins. It is stated that because the ancient priest Narayan Kandoli was too old to ascend the hills, he transported the deity with honour to where it is now. The temple was created by a British manager, most likely Humphrey, and was ornamented with antique sculptures of ancient temples such as flying Apsara, Gajathan, and so on. However, due to a lack of sufficient maintenance, these were also destroyed. A new structure is being constructed here right now. The unique feature of this temple is that ‘The Linga Murty’ is on the ground, whereas most other old Siva Lingas are buried in a pit. Animal sacrifices are also performed here, which is uncommon in other temples. This is most likely due to the influence of the Kachari Kingdom.

The Kuruabahi Satra, one of Assam’s four pioneer ‘Satras,’ is increasing the splendour of Bokakhat. It has been preaching the “Mahapurusiah” concept here for some time now. It’s located to the east of Bokakhat. It was founded in the middle of the 17th century, under the reign of Ahom Pratap Singha. It has also shifted to its current location as a result of erosion. Sri Sri Bansigopal Dev, a Brahmin from Konauj, founded this satra. It became a religious, cultural, and political centre. It represents the rich Assamese culture.

A one-of-a-kind elephant sculpture is curled out of the sone in the midst of a hilltop bathed by a crystal clear stream. It is located to the west of Kaziranga. It is reported that it was founded in the part by the great Danav King Narakasma. There is also a temple there now.

Historians believe it was a training centre for elephants throughout the reigns of Ahom kings from Pratap Singha to Chkradhwaj Singh. It was here that wild animals were captured and trained. As a result, the sculpture became a symbol of this ‘Pilkhana.’

It is situated on the main road in Golaghat town, within the house of Dr Robin Banerjee, an internationally renowned naturalist. Dolls, artefacts, keepsakes, videos, and other personal collections from Dr Banerjee’s lifetime are on display in the museum. There are 587 dolls and 262 additional display items. There are also 194 paintings and 19 award-winning pictures. Dr. Robin Banerjee created all of the paintings and images, all of which are related to wildlife. There are 93 artefacts in all. For example, a Naga Warrior’s head hunting basket, a little gorgeous Turquoise horse, and many more. There are also various documentary film compilations dating from 1953 to 1998.

It is a popular area for eating alfresco and picnicking. Kakochang Falls is located around 13 kilometres from Bokakhat in the Jorhat Region of Assam. It is located between Kaziranga National Park and Bokakhat. It is necessary to eat outside in a location where tourists can savour spectacular views of the characteristics as well as the forests and mountains. Nearby attractions include historical Numaligarh or Deopahar ruins, tea sceneries of Methoni, Hatikhuli, Difalu, and Behora Borchapori, as well as coffee and rubberized plantations. Because this waterfall is active during the winter and dry season, it has become a popular tourist site for travellers to Kaziranga.

Best Time to Visit in Golaghat

The months of November through March have fair and agreeable meteorological conditions, making them perfect for a visit to Golaghat.

How to Reach Golaghat

Golaghat is one of the most popular tourist attractions in North East India, with visitors coming from all over the country. The trip to this region is quite convenient since it has a well-developed communication and transportation network.

The city does not have its own airport, although Jorhat’s Rowraih Airport is the closest. You may also fly to Dimapur Airport and then go to this city from there. There are significant airlines that fly these routes, which connect several of the country’s largest cities.

The Furkating station and the Sarupathar station are two of the district’s principal railway stations. Tourists can take a train from Guwahati or Jorhat to these stations, which would take them to their desired location.

The city is well connected to neighbouring areas through NH37 and NH38, so travellers will have no difficulty getting about.