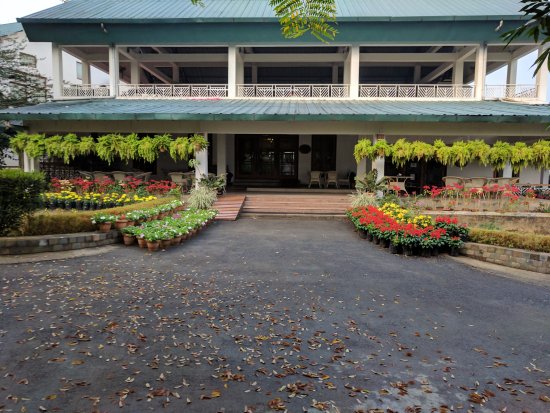 The administrative district of South Salmara Mankachar is located in the Indian state of Assam. Hatsingimari hamlet, around 245 kilometres from Guwahati, is home to the district headquarters. It was once a Dhubri District sub-division.

The Kamakhya temple is a Hindu temple devoted to the mother goddess Kamakhya, located in Thakuranbari hamlet near Mankachar town in the South Salmara Mankachar district of Assam. The temple is respected in the same way as Guwahati’s famed Kamakhya temple. This temple is one of the holiest destinations for worshippers since it is one of the 51 Shakti Peethas of Hindu Mythology. According to legend, the navel of Goddess Sati’s dead body dropped at this place.

The temple’s principal goddess, Kamakhya Devi, is located in a sanctum. The temple grounds also include temples to Lord Shiva, Durga, Hanuman, and Santoshi.

The mausoleum of Mir Jumla, Governor of Mughal Emperor Aurangzeb, is located in Thakuranbari hamlet in Mankachar town in the South Salmara Mankachar district, near the Assam-Meghalaya border.

Mir Jumla, the 69-year-old Governor of Bengal appointed by Aurangzeb in 1659, attacked the Koch kingdom of Cooch Behar and compelled the Raja of Cooch Behar to surrender to Mughal rule. Interestingly, when Cooch Behar was seized, he explicitly ordered Mughal forces not to mistreat or pillage common people in any way. Mir Jumla then invaded the Ahom kingdom of Assam in 1662. But, strangely, Mir Jumla’s final campaign was a catastrophe. Mughal forces were forced to fight in treacherous terrain and suffered huge losses. Supplies ran out, and many people died. Mir Jumla’s army was forced to retire after losing two-thirds of its strength.

Aboard his journey back from Assam, he grew terribly ill and died on a boat on March 30, 1663. When he died, he was 72 years old. He was laid to rest on a hillside in Thakuranbari, where his tomb still exists. The tomb is maintained by the local Mazar Sarif committee and is a popular destination for visitors and historians from all over the world.

South Salmara is best visited during the months of January and February.

How to Reach South Salmara

The nearest airport is Rupshi, which is 72.8 kilometres (45.2 miles) from Hatsingimari’s headquarters. It was built primarily for military purposes by the British government during World War II. The Indian Airlines and a few private commercial aircraft operated between Calcutta, Guwahati, and Dhubri on a regular basis until 1983. It is now completely closed. However, the Ministry of DONER, Government of India, has lately started steps to repair and functionalize the airport.

There is no Railway station in the district.

In the district, there is no National Highway. Transportation is provided via state-maintained pwd roads that are riddled with potholes. Hatsingimari is located in the district’s centre, and one section of Hatsingimari town is connected to the Assam-Meghalaya border. Between South Salmara to Mankachar, there is no PWD road. Fulbari–Singimari route, which runs through Meghalaya, is the only overland connection between South Salmara and Mankachar.

The town had a major river port on the Brahmaputra’s bank, which was utilised as an international commerce centre with neighbouring nations, particularly during the British era. The port is now unusable.