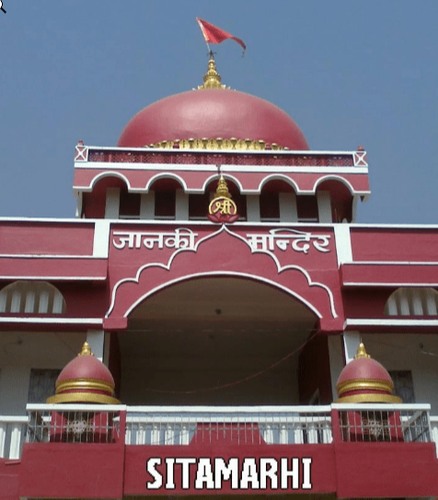 Sitamarhi is a city in the Mithila area of Bihar, India, and the district capital of the Sitamarhi district. It is part of the Tirhut Division. The city’s name has a legendary connection to one of Hindu mythology’s greatest epics, the Ramayana. Sita, Lord Rama’s wife, is supposed to have sprung to life from an earthen pot while Raja Janak was ploughing the land on a place now known as Sitamarhi in order to impress Lord Indra with rain. The birth of Sita was the inspiration for the name ‘Sitamarhi.’

The contemporary city of Sitamarhi is a combination of countryside panoramas, religious backgrounds, and modern edifices, all of which combine to form an enticing image.

In Hindu mythology, Sitamarhi is a sacred site. Its origins may be traced back to Treta Yug. When Raja Janak was ploughing the land somewhere near Sitamarhi to urge upon Lord Indra for rain, Sita, Lord Rama’s wife, came to life out of an earthen pot. Raja Janak is supposed to have dug a tank at the spot where Sita appeared and, following her marriage, erected stone figurines of Rama, Sita, and Lakshman to mark the spot. Janaki-kund is a tank located to the south of the Janaki Mandir.

The region deteriorated into a forest until around 500 years ago, when a Hindu monk named Birbal Das had divine inspiration and discovered the location where Sita was born. From Ayodhya, he descended and cleared the forest. He discovered Raja Janak’s pictures, erected a shrine over them, and began worshipping Janaki or Sita. The Janaki Mandir appears to be new, having been built barely a century ago. However, there are no archaeological artefacts in the town.

Best Time to Visit in Sitamarhi

How to Reach Sitamarhi

By Rail
Sitamarhi has its own railway station, which is 2 kilometres from Janaki Temple. It is on the Raxaul-Darbhanga train line of East Central Railways. The Sitamahal Express and Gandak Express are the two primary trains that serve the city. Raxaul JN is the closest major station to Sitamarhi in the west, while Darbhanga Railway Station is the closest in the northeast.

By Road
If you intend to go by road to see the holy city of Sitamarhi, we can promise you that the journey will be enjoyable and unforgettable. The reason for this is because the city is well connected to nearly all of the main cities in and surrounding Bihar. The National Highways that go through it are wide and well-maintained, ensuring a comfortable ride.