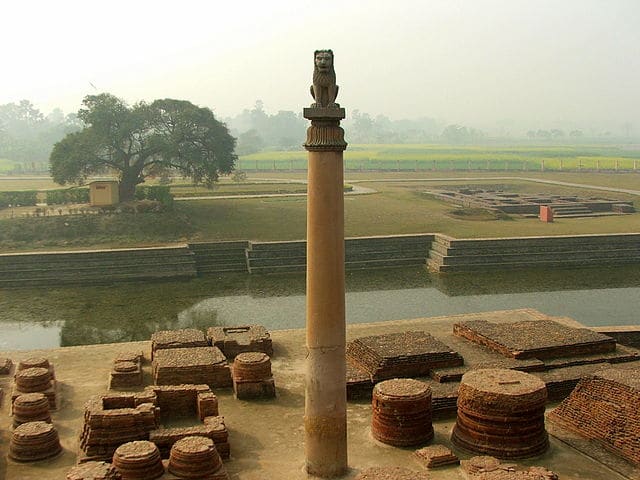 The district of Vaishali is located in the Indian state of Bihar. It belongs to the Tirhut division. Vaishali was named after King Vishal of the Mahabharat period, and is said to be the world’s first republic. He is supposed to have built a massive fort here that is now in ruins. Vaishali is a major Buddhist pilgrimage site as well as Lord Mahavira’s birthplace. It is claimed that the Buddha came here three times and stayed for a long period. At Vaishali, the Buddha also gave his last speech and proclaimed his enlightenment. Vaishali also presided over the second Buddhist Council after his death.

In the sixth century BC, the powerful Lichchavi clan governed Vaishali, and their dominion stretched all the way to Nepal’s highlands. The Lichchavi state is regarded as Asia’s first republican state. Vaishali was governed by 7707 rulers of the Lichchavi dynasty, according to the Jataka tales (Buddhist narrative books detailing the Buddha’s many births). In the fifth century BC, Ajatshatru, the great Magadh King, conquered Vaishali, and Vaishali progressively lost its splendour and strength.

Best Places to Visit in Vaishali

Vaishali is well-known for its tourist attractions, including the First Republic of the World, Bhagwan Mahavir Birth Place, Gautam Buddha Relic Stupa, and Samrat Ashoka Pillar.

At Kolhua, Emperor Ashoka erected The Lion Pillar. It is composed of a single block of highly polished red sandstone and is topped by a bell-shaped capital that stands 18.3 metres tall. On top of the pillar is a life-size lion sculpture. Ramkund is a small tank located here. This pillar, located next to a brick stupa in Kolhua, commemorates Buddha’s last teaching.

Vaishali Mahotsava
On the full moon day of the month of “Vaisakh,” Vaishali mahotsava is conducted to commemorate the birth anniversary of the Jain Tirthankar, Lord Mahavir (mid-April).

During the Sonepur Mela, the Bihar State Tourism Development Corporation provides Swiss Cottages with connected bathrooms and other amenities in the temporarily created Tourists Village.

Arts and Crafts
Several communities in the vicinity of Vaishali produce lovely handcrafted toys. The modest blade of grass is hand-woven into lovely baskets and mats by Sikki Work. Lac bangles, these handcrafted lac bangles are from Muzaffarpur, a neighbouring city.

This location is close to Patna, between Khushinaga and Gaya. We left Khushinaga after breakfast and had a picnic-style lunch in this garden. After Buddha’s nirvana, the first Buddha council was held on the mountain summit at Rajgir. They had their second council here after 100 years. Emperor Ashoka (268–232 BCE) constructed many stupas and pillars throughout India, but only 19 remained. A pillar with a single Lion on it may be found here. The pillar was 18.3 metres tall and formed of red sandstone. There is also a pond and a ruin stupa beside the pillar. The property was well-kept, with lovely flower beds.

Best Time to Visit in Vaishali

The greatest time to visit Vaishali is, of course, during the winter season, although it is also beautiful during the rainy season.

How to Reach Vaishali

The nearest airport to Vaishali is Patna, the state capital of Bihar. Regular flights connect Patna to major cities including as Delhi, Kolkata, Varanasi, Lucknow, and others. Patna is also accessible via Kathmamdu.

Vaishali is served by a well-developed road network that connects it to a number of significant Bihar cities, including Patna (55 km) and Muzaffarpur (37 km), which are connected to the rest of the nation. Bodhgaya (163 kilometres), Rajgir (145 kilometres), and Nalanda (140 kilometres) are all near by.

Hajipur, which is approximately 2.5 kilometres from Vaishali, is the nearest railway station. Hajipur’s railway station is served by important trains on a regular basis. Hajipur is accessible from major Indian cities such as Delhi, Kolkata, Mumbai, Chennai, and Varanasi.