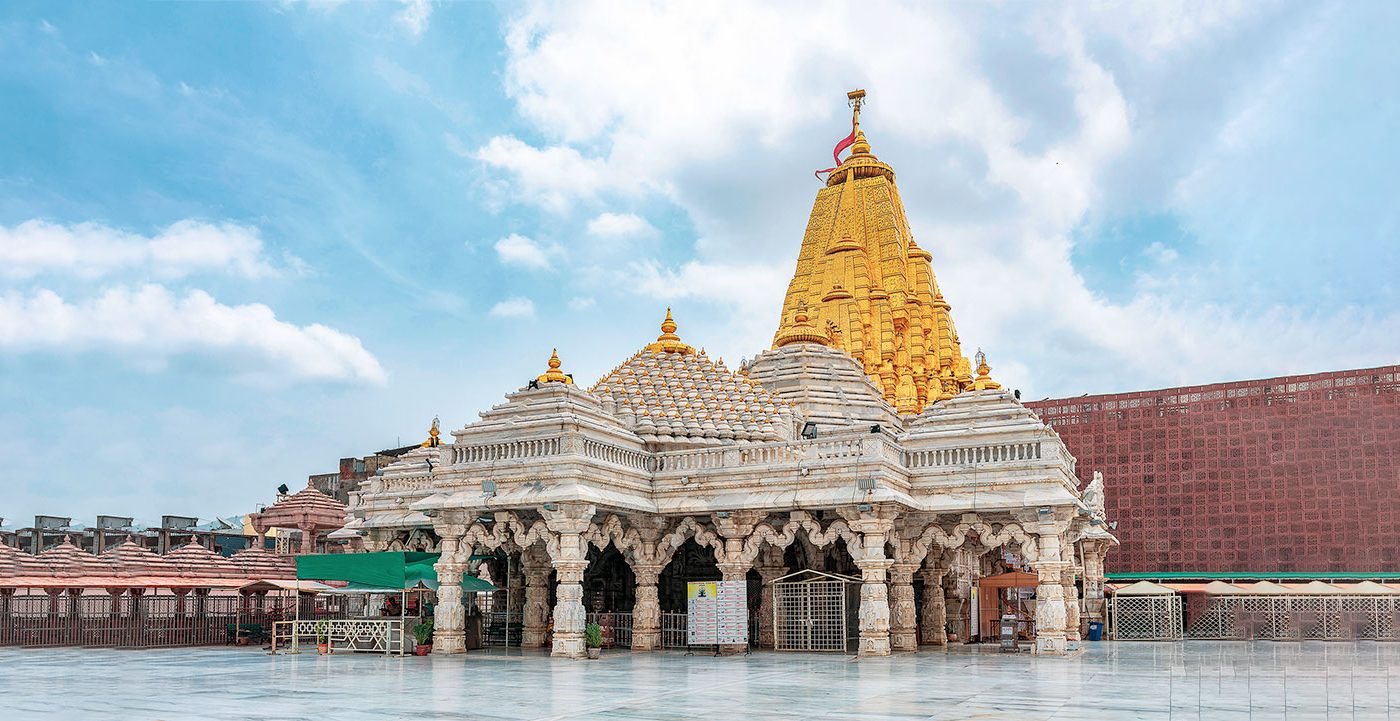 The Sloth – Bear Sanctuary, located in the Aravalli range’s Jessore hills, includes an area of 180 square kilometres of dry deciduous woodland. Aside from sloth bears, the sanctuary has also been home to leopards, blue bulls, wild boars, porcupines, and a variety of birds. The sanctuary also protects endangered animals such as the jungle cat, civet, caracal, wolf, and hyena. The sanctuary has also recognised 406 plant species.

Gabbar (or Gabbargadh), a tiny mound approximately four kilometres west of Ambaji hamlet, is thought to have been the goddess’s initial throne, the place of Krishna’s tonsorial ceremony (ritual head-shaving), and the dwelling of the celestial Mahishasur-Mardini.

The slope is quite steep and tough to ascend. At the foot of the hill, there are 300 stone stairs, following which the pilgrims must climb a tight, perilous path. On the flat top of the hill, there is a little niche facing the Ambaji temple, in which a well-protected lamp is kept always burning, and which can be seen at night from the main Ambaji temple. The footsteps of the Goddess are venerated beneath a pipal tree.

This Seema Darshan was started on the basis of the Wagah Border pattern in order to observe the courage of BSF Jawans. Only the Wagah border is a frontier outpost across the India-Pakistan border where both countries conduct drill retreat and civilians may enjoy watching it. The BSF’s withdrawal ceremony, fusion band performance, camel exhibition, and bird observation will be among the attractions at the border viewing site. Visitors will also be able to witness a weapons display, a picture gallery, and a video on the Border Security Force (BSF) at the newly created border viewing point by Tourism Corporation of Gujarat Limited (TCGL).

The Lohani Nawab, who ruled over the province of Palanpur or Banaskantha, is said to have preferred to repose at the Balaram Palace. According to historical documents, the Balaram Place was built between 1922 and 1936 by the 29th king of Palanpur. The interiors of this enormous mansion were influenced by neo-classical and baroque architectural styles. This palace covers an area of around 542 square kilometres. This majestic mansion is surrounded by lush green trees and gardens. However, this palace, which was formerly used as a hunting getaway by Nawabs and monarchs, has now been converted into a resort. It is located at the apex of the region in northern Gujarat.

Mangalya Van, a unique garden that has recently drawn crowds of tourists, is nestled atop a hilltop i.e. Kailash tekri about a kilometre and a half from the Ambaji Temple on the Khedbrahma Highway. To reach Kailash Tekri and Mangalya Van, which are also surrounded by water bodies, one must climb stairs. The forest department created the van, and its USP is a unique Rashi Van (astrological garden) interior and a garden of plants, which astrologers claim have the same influence on one’s life as stones.

The Dantiwada Dam was built across the Banas River. The goal of this dam’s construction was to control floods and provide water for agricultural projects in Gujarat. The dam is 61 metres in height and 4832 metres in length. Because of its beautiful attractiveness, this dam attracts people from all across the country. Visitors make a point of visiting the Balaram Ambaji Wild Life Sanctuary, which is located near the dam. It is the boundary between Dharoi and Dantiwada dams. The estimated distance between Palanpur and Dantiwada Dam is 23 kilometres (14 miles). During the summer, the temperature ranges from 23 to 44 degrees Celsius. During the winter, temperatures range from 10 to 36 degrees Celsius.

The Kirti Stambh, a towering pillar opposite the railway station built in 1918 by Nawab Shri Taley Mohammed Khan to honour the valour of Shri Sher Mohammed Khan, salutes the glory of the Nawabs of Palanpur. It was built at a cost of Rs.40,000 under the direction of then-Public Works Officer Saiyed Gulab Miyan Abdumiyan. It is now a robust emblem of the city’s greatness and serves as a chronicle of Palanpur’s evolution, with a list of Jhalore and Palanpur rulers inscribed on it. The Kirti Stambh was dedicated by Maharaja of Bikaner, General Sir Gangasinghji.

Kamakshi Mandir is part of the Kamakshidevi Temple Complex, which is 1 km from Ambaji on the Khedbrahma Highway. All 51 Shakti Peethas and the cosmic power centre have been rebuilt and put in this complex to give tourists and devotees with comprehensive information on the great Shakti Sampraday and Aditya Shaktimata’s different incarnations.

One and a half kilometres from Ambaji town. It is home to the mediaeval Jain temple of Shri Neminath Bhagvan, which was built in the 13th century. Neminath bhagwan’s kumbhariya jain temple Gujarat currently has a historical centre. The primary feature of the temple is the magnificent sculpture on the wall. It is made composed of the ruins of a complex of 360 temples erected by Vimalsha in 1032. It has a long history. And it is currently known as the Gujarat Heritage Center. For worshippers, the Jain temple provides dharamshala and bhojanshala.

Ambaji, a famous pilgrimage place of Gujarat in India, is located on the border of the states of Gujarat and Rajasthan near Abu Road, in the Danta Taluka of Banaskantha District, near the origin of the famous Vedic virgin river SARASWATI, on the hills of Arasur Parvat in Ambica forest, towards south-west side to old hills of Arvalli, at an altitude of about 480 metres, at about 1600 feet high from sea level, with an

. Banaskantha is best visited between October and March.

How to Reach Bharuch

National Highway (NH) 27 connects Palanpur and Deesa, the two largest cities of Banaskantha district, to the national capital Delhi and Jaipur, the capital of the adjacent state of Rajasthan.

The district is connected to the state’s major cities, including Ahmedabad, Patan, and Deesa, by State Highway 7. State Highways 54 and 56 link Palanpur to Ambaji (a major pilgrimage).

Dholera port is the closest port. National Highway 15 also connects the neighbourhood to the Kandla port.