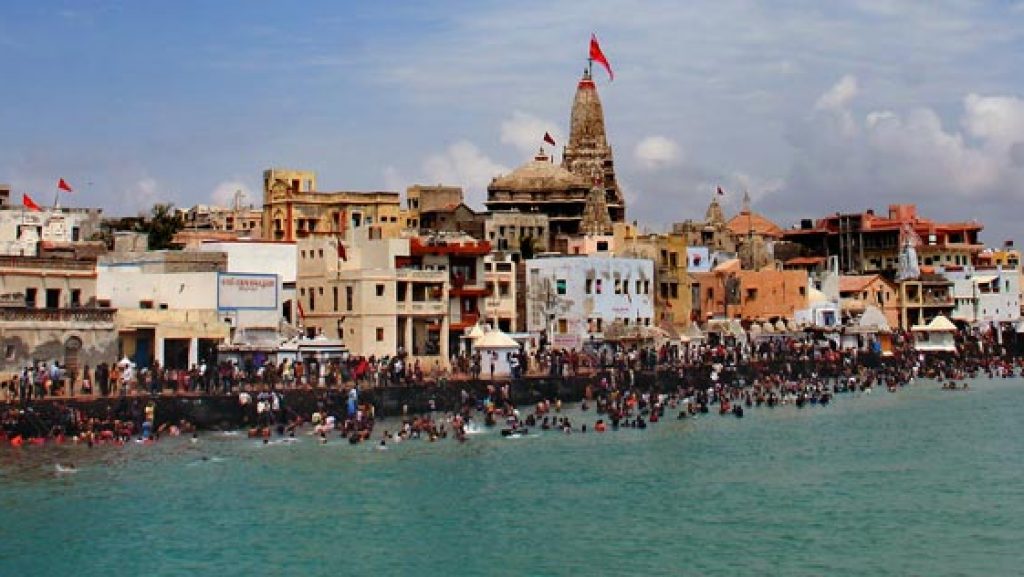 Devbhumi Dwarka District is a district in Gujarat, India, located on the southern shore of the Gulf of Kutch. Jamkhambhaliya is home to the organization’s headquarters.

There is a Sanidev temple at the junction of Dist.Bhanvad Hathla village. This ancient temple is located in Hathla hamlet, on the boundary of Devbhumi Dwarka and Porbandar districts. The archaeological department has included the Maytrikalin Temple of the 7th and 8th centuries on its list of protected sites in the state.

When Shani was in Chhaya’s womb (who was a great devotee of Lord Shiva). She did not take good care of herself and was extremely engrossed in Lord Shiva’s devotion, therefore Shani was born with a dark complexion. Surya, Shani’s father, was not pleased because he was the sun, the ruler of light and brightness, and he refused to accept Shani as his son. Shani’s father went into eclipse when he opened his eyes. Shani regarded his father as an adversary and performed Tapasya (penance) to satisfy Lord Shiva. Shiva bestowed upon him the power to be the most powerful of all planets, including his father Surya. Shani defeated his father in order to revenge his and his mother’s humiliation. One of the nine planets is Shani deva. Saturn is the seventh planet in the solar system. Surya (sun) and Chhaya’s son is Shani Dev.

Harsidhdhi Temple, located on the border of Halar and Sorath, is the kuldevi of Shri Lord Krishna as well as King Vikramaditya. Harsidhdhi Temple is located on the sea shore of Halar, Gandhavi Village, and the Medhakhadi coast line. Harsidhdhi temple is from Chalukaya Kal and is located on Koyla Dungar. Aarti is a one-of-a-kind individual. You will feel too nice after about an hour of Aarti. Maa Harsiddhi is supposed to be present during the Aarti. There is a Hindola (Jhula), and as soon as Maa appears, the Hindola begins swinging. The environment is serene.

Bet Dwarka is the house of Guru Govindsinh’s most adored brother, Mohakamsinhji. This gurdwara is built on his karmabhumima. The Gujarat government organised recall travel from Gujarat to Punjab in 1999. Many activities were organised around the state for the Sikh religion’s Khalsa sect tercentenary commemoration. As a result, Bet Dwarka features several Shrines (Dharamsthals), such as the Hindu Dwarkadhis temple, the Vaishnav Hanuman temple, the Muslim Hajipir and Kirmani, and the Sikh Mohkamji’s Gurudwara.

Ran Pindara Pindara hamlet, located on the boundary of Kalyanpur Taluka, is said to be related with Pandav period historical events. Pandavas discovered 108 pinds of iron after the Mahabharat battle, according to Rushimuni’s idea. This location has been known as Pindtarak since that period. Pandvas are said to have conducted pitru tarpan at Trayambkeshwar Kund. Every year on this day, when the sea is at its lowest, locals flock to the region.

The Ancient Indreshwar temple, located at the confluence of three rivers on the Dist.Bhanvad Khambhalia route, has become a tourist destination due to its Triveni Sangam. This location’s cremation is known as awake cremation. The large lake, Indreshwar Lake, adds to the attractiveness of the area. At Triveni sangam, two rivers, the Vartu and Falku, merge into the Vartu. The Indreshwar Mahadev Temple is located at this site.

Kileswar Mahadev Temple was established during Jamrajvi at Bhanvad taluka, on the boundary of Porbander District, above Barda Hills. Sivalaya, which is located in the region of proclaimed reserve forest governance, exemplifies the splendour of Jamsasan. During the month of Shravan, visitors go to Kilesvarana temple for darshan.

Kileshwar is famous for its gorgeous Mahadev Temple, which is surrounded by mountains and is located in the Barda Hills, 50 kilometres from Jamnagar, Gujarat. The Kileshwar mahadev temple was built by Jamnagar’s rajvi shri Jaam Sahib, and this is how the town got its name. According to folklore, the Pandavas lived here during their exile. When the Shravan month begins in the Gujarati calendar, between 2500 to 5000 people visit this magnificent area on a daily basis. Shatrushalya Sinhji also provides meal service to tourists throughout the Shravan month.

Kileshwar is located on Barda hill and is noted for its tourist features such as Shiv temple, water pond, fort, natural water fall, dam, and forest area. Generally, this site is only available to tourists during the month of Shravan, and this is the finest time to visit. During the monsoon season, natural swimming ponds are present. If you want to go swimming, avoid going during Shravan month to avoid crowds.

Shri Halar – Tirth Aradhanadham is situated on the banks of the Sinhan River, in the midst of the soothing sound of the dam’s flowing waves of water, among the gardens of different fruits, on the western seashore. This amazing memorial to Jainism spans 40 acres of land beside the Jamnagar Dwarka highway in Gujarat’s Devbhumi Dwarka area. The tranquil, calm, and environmentally friendly complex is a fine example of Jain architecture and construction. It is a popular pilgrimage site for Jain devotees from all over the world.

Both the Jain temple and Lord Jineshwara can help you find peace of mind. They are the primary source of support for spiritual sadhana. Knowing this, Vaghjibhai planned to build a large magnificent temple at Aradhana Dham for both local and foreign visitors. He sought the blessings of Shri Mahasenvijayji Maharaj. But what a terrible catastrophe! Pujyashri had also left. However, his heavenly might from Heaven aids in the formation of Holy Halar Tirth. Vaghjibhai created the foundation for Ashadha Suda Bij in 2043, with the blessings of Acharya Dev Shrimad Vijay Pradyotansuriswarji Maharaj and Param Pujya Panyas Pravar Shri Vajrase Vijayji Maharaj.

A wonderful and unique temple for Lord Hanuman is located five kilometres east of the major Sri Krishna temple in Beyt Dwarka. It is also known as Dandi Hanuman Temple. It’s more intriguing to see how this temple is distinct. Let us take a little stroll through the fabled pathways of Ramayana to see how amazing the temple is. While there are various versions of Ahi Ravan, Mahi Ravan, and Makaradwaj, the following descriptions of Sri Ahi Ravan and Mahi Ravan are unique to the Maharashtra Bajanasampradhaya, particularly those who follow Sri Aanantha Dhanaya Deva.

A club may be seen between them. There appears to be no need for the club here. Sri Hanuman is shown in a peaceful and joyful mindset, while Sri Makaradwaj is also seen enjoying and relaxing. These two are not wielding a club or any other weapon. In Gujarat, ‘Dandi’ is used to represent pleasure, merrymaking, and sadness. It’s no surprise that the temple where Sri Hanuman and Sri Makaradwaj are virajman is called ‘Dandi Hanuman,’ which translates to “joyful Hanuman.”

Dwarka is best visited between November and the end of February, when the city endures chilly winters. However, if you wish to take part in the celebrations of Dwarka’s grandly renowned Janmashtami Festival, visiting the town between August and September will be worthwhile.

How to Reach Devbhumi Dwarka

Dwarka is easily accessible by bus from other major cities around the country.