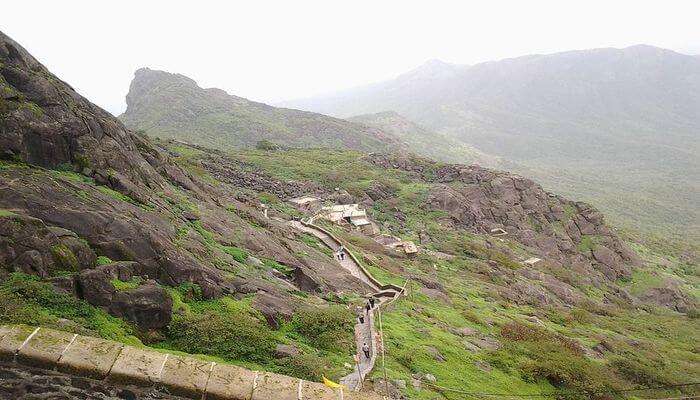 Junagadh is a city in Gujarat, a western Indian state. The Mahabat Maqbara, a massive 19th-century tomb of a local king with exquisite Indo-Islamic architectural features, is a must-see. The ramparts of Uparkot Fort, which was built in 300 BC, offer views of the city. The stone-cut stepwells Adi Kadi Vav and Navghan Kuwo, as well as Buddhist caves, are located within the fort. Darbar Hall Museum, located to the west, is situated in a historic palace.

Best Places to Visit in Junagadh

Girnar, also known as Girinagar or Revatak Parvata, is a series of mountains in Gujarat’s Junagadh District, near Junagadh. Girnar, the peak, and its range are revered as being older than the Himalayas. It is a significant pilgrimage destination for both Hindus and Muslims, who flock here during the Girnar Parikrama festival. Later, numerous Jain temples were erected, some of which are still in use today. Girnar is one of the five major ‘tirthas’ credited to several ‘Jain tirthankaras” panch kalyanakas. Girnar is especially noteworthy among Shiva worshippers for the mountain range’s so-called “mystic space-time,” with the presence and turnover of several Sadhu Baba sects, Nath sect, and others. Flora and fauna events, such as the Maha Shivratri fair, are also conducted in the Himalayas.

Various Jain Tirthankaras and monks have visited and conducted harsh penance at Girnar’s summits in the past. Throughout its span, it is home to a multitude of temples and historical sites. The mountain range acts as a centre of religious activity in the middle of the beautiful green Gir Forest.

Gir is one of India’s oldest wildlife sanctuaries, and it is synonymous with the beautiful Asiatic lion (Panthera leo persica). This park, which is the only area in India where you can view this animal, may legitimately take satisfaction in rescuing an endangered species that was on the verge of extinction at the beginning of the twenty-first century by providing it with a more safe home. Gir environment is located in Biogeography Zone 4 (semi-arid) and Biogeography Province 4-B. The Asiatic Lion, Panthera leo persica, may still be seen in Gujarat Rajwara. The Gujarat government has designated an area of 1412.1 square kilometres as a Protected Area (PA), including 258.7 square kilometres designated as a National Park and 1153.4 square kilometres designated as a Sanctuary. Aside from that, 470.5 square kilometres of forest function as a buffer zone as reserve, protected, and unclassified forest. Thus, the Gir forest covers an area of 1882.6 square kilometres.

Mahabat Maqbara Palace, also known as the Mausoleum of Bahaduddinbhai Hasainbhai, is a mausoleum in Junagadh, India, that was previously home to Junagadh’s Muslim rulers, the Nawabs. Other nawab-built mausoleums from the 18th century may be seen in the region of Chitkana Chowk in Junagadh.

Damodar Kund is a sacred lake according to Hindu beliefs, located in Junagadh in Gujarat, India, amid the foothills of the Girnar hills. According to Hindu mythology, it is considered sacred, and many Hindus like to wash and immerse the ashes and bones left after cremation of dead corpses here at Damodar Kund in the idea that the departed souls would attain moksha. Other renowned venues for ashes and bones immersion (Hindu rite of asthi-visarjana) include the Ganga at Haridwar and the Triveni Sangam at Prayag. The lake’s water has the ability to dissolve bones. The lake is 257 feet long, 50 feet wide, and just 5 feet deep. It is enclosed by a well-constructed ghat. The stairs to the Girnar hills begin at Damodar Kund.

The dam is situated at the foot of the hill where the Kalwa River begins. It was constructed as a drinking water reservoir for the residents of Junagadh. It was named after Lord Willingdon, the Governor of India at the time. Near the dam, the steps lead up to the famed Jamiyal shah Datar shrine, where both Hindu and Muslim followers share their beliefs.

Sakkarbaug Zoological Garden, popularly known as Sakkarbaug Zoo or Junagadh Zoo, is a 200-hectare (490-acre) zoo in Junagadh, Gujarat, India, that opened in 1863. The zoo produces purebred Asiatic lions for the Indian and critically endangered species captive breeding programmes. Wild, free-roaming Asiatic lions have been extinct throughout most of Asia, and are now only found in the neighbouring Gir Forest.

Adi-kadi Vav, which was erected in the 15th century, is fully cut out of hard rock. A small flight of 120 stairs cuts through the stone to meet the well shaft, which is deep within the stone. Two distinct stories claim to explain the well’s name. According to legend, the king ordered the construction of a stepwell, and labourers delved down into this hard stone, but no water was discovered. According to the royal priest, water could only be obtained if two unmarried virgins were sacrificed. Adi and Kadi were the unlucky ones picked for this, and water was discovered after their sacrifice. The other, less spectacular but more realistic, version goes that Adi and Kadi were the names of the royal servant girls who fetched water from the well every day. In any case, individuals continue to hang fabric and bangles on a neighbouring tree as a memorial.

Navghan Kuwo, which is only a few years short of a thousand years old (it was supposedly built in 1026 AD, while other reports claim it is considerably earlier), is partially hewn out of soft rock and partly built up structurally like other wells. The stairs leading down 52 metres (170 feet) to the water level wrap around the well shaft itself, which is particularly unusual. Uparkot was able to endure numerous protracted sieges thanks to the water from Navghan Kuwo.

The Ashoka’s Rock Edicts date from 250 BC, and around 14 of Ashoka’s edicts may be found on the road to the Mount Girnar Hills. This rock edict is a massive stone, and the carving in Brahmi writing in Pali language mentions opposition to greed and animal sacrifice, as well as the moral ideals of purity of thought, secularism in thought, compassion, and appreciation.

The stone edicts of Emperor Ashoka, discovered on the way to Mt. Girnar, are another important component of Junagadh’s Buddhist legacy. When Ashoka famously converted to Buddhism and renounced violence, he had edicts carved in stone and placed in sites all across India (ranging as far west as Kandahar in modern-day Afghanistan, east to modern Bangladesh, and south to Andhra Pradesh) with precepts for living a virtuous life, respecting others, and creating a just society. The edicts, which speak in moral and ethical terms rather than religious ones (though the Buddha is addressed), reach out to people of all faiths.

In Junagadh, one visible injunction reads: “To develop one’s own sect, degrading the others out of fondness for one’s own, to glorify its merit, is to cause the worst injury to one’s own sect.” This is great advice from 2300 years ago speaking to us. The edicts’ site is open daily from 8 a.m. to 6 p.m. The cost of admission is Rs.5/- for Indians and Rs.100/- for foreigners.

Winter is the ideal time to visit Junagadh.

How to Reach Junagadh

The nearest airport to Junagadh is Rajkot, which is about 100 kilometres away. A number of planes travel in and out of the city, linking it to other regions of Gujarat and the country.

Junagadh is part of the Indian Railways’ Western Railway network. The city has a number of trains that connect it to the rest of the nation. Many express and local trains run on a regular basis and are ideal for getting from Rajkot to Junagadh.

A strong road network connects Junagadh to the rest of the country. The city is also connected by an excellent network of national and state highways. Junagadh is connected to all of Gujarat’s main cities and towns, as well as other states throughout the nation, via the State Transport Corporation.