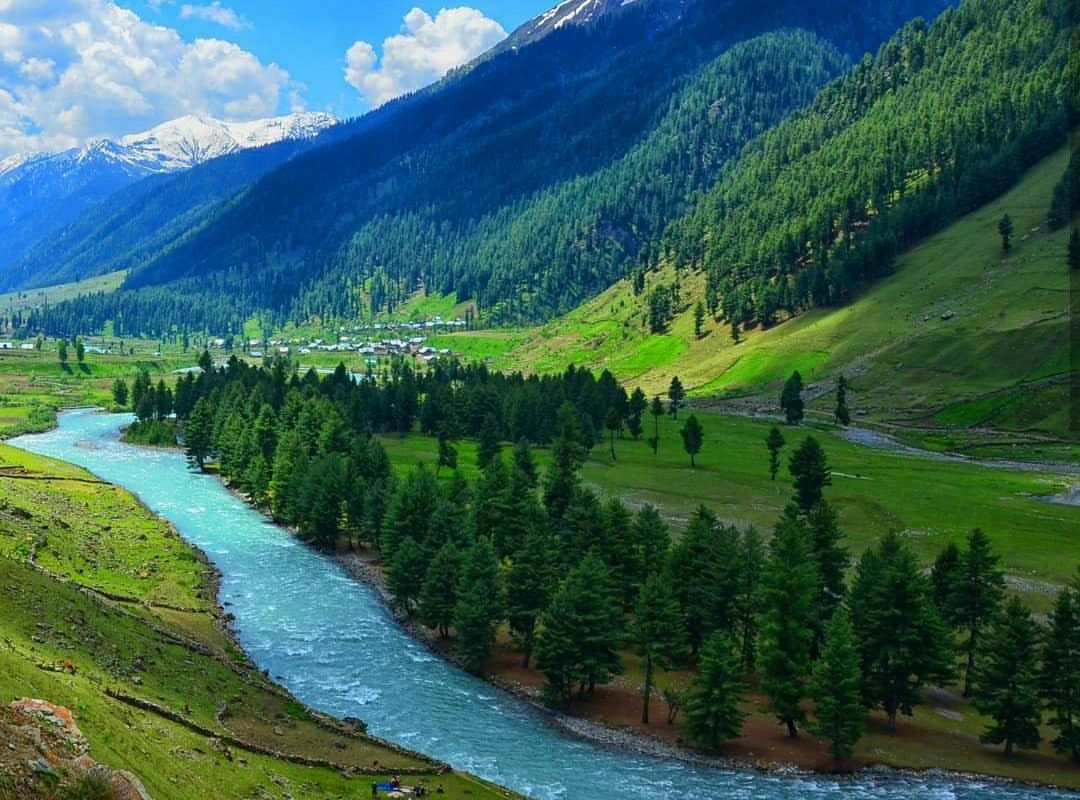 Kishtwar is a municipality in the Kishtwar District of the Jammu region in the Indian union territory of Jammu and Kashmir. Commonly known as the “Land of Sapphire and Saffron”, it is also very rich in forests and wildlife. One of the most distinguishing features of Kishtwar is a very vast ground with plateau type geography.

Kishtwar is one of Jammu and Kashmir‘s biggest districts, nestled in the Himalayas. Sinthan Top, Saffron Valley, Sapphire Mines at Paddar, Mughal Maidan, Machail Valley, Kishtwar National Park, Dachhan Valley, Marwah, and Warwan Valley are some of the most beautiful tourist sites in Kishtwar.

Best Places to Visit in Kishtwar

The Chowgan is a large play ground/grazing field in the heart of Kishtwar. It covers around 520 Kanals (165 Acres). It is bordered by Chinar, Deodar, and other trees. It is the most appealing location in the Kishtwar district. To the north is a large temple known as Gori Shanker Mandir, while to the south is a Shrine (Ziyarat) known as Asrar-Ud-Din- Bagdadi. Its ancient name is Goverdhansar, and it was once a lovely lake, but due to a natural disaster, all of its water flowed down, and it is now utilised for playing and grazing. This ground is presently being turned into a contemporary ground, complete with electric lights and various varieties of flowers all around it. The Kishtwar area’s livestock (goats, cows, and so on) are heavily reliant on this land. Its plants and grass are extremely nutritious and beneficial to animals.

The majority of people stroll on this land in the morning and evening. It is bordered to the east by NH1B and to the west by other connecting roads. On the north side, there is also a tiny helipad/airport. A number of communities surround this playground, adding to its attractiveness. It is around 1500 metres from Kishtwar’s main bus stop. There are a variety of transportation options available to go to this location. Its right side touches Dak Bungalow and Kuleed, and its left side touches Bun Astan, Matta, and Sarkoot. This ground serves as a link between these two locations.

The Himalayan pilgrimages are the world’s oldest planned travel system, developed through time by Hindu sages and reflecting the spirit of wander, adventure, and spirituality.” Maa Chandi, one of the holy trinity, is a living goddess. Vedic tales, spirituality, and even astronomy attest to his existence since the beginning of time. Because to the temple of ‘Chandi Mata,’ the village Machail in Paddar has recently become a centre of religious significance and holiness. Every year on the day of the first Bhadon or Bhadoon Sankranti (15th or 16th August), when the doors of Paddar’s temples are thrown open, a large mela is held outside the Chandi Mata temple at Machail, where people from all over Paddar gather to offer prayers to the deity and invoke her blessings.

Devotees from Thakur Kulbir Singh’s native village, Chinote Bhaderwah, carry out a mace or Holi Chhari of Goddess Chandi Mata. Under his auspicious command, a procession is led to Machail, with people singing bhajans in honour of the goddess as drums are beaten, flutes are played, and mantras are chanted. The yatra is now also carried out from Jammu. This yatra has played the most important role in exposing the unique characteristics of Paddar and instilling in people a sense of adventure. This procession begins at Bhaderwah and travels to Pul Doda around midday. From there, the yatra proceeds to Kishtwar, passing through Thatari, Drabshalla, Kandni, Hasti, and finally arriving in Kishtwar around 4 p.m. The following day, Yatra travels from Kishtwar to Atholi Paddar.

The Machail Yatra pilgrimage to the high altitude Himalayan shrine of Mata Chandi, one of the manifestations of Goddess Durga, is becoming increasingly popular and has surpassed the status of the second largest pilgrimage in the Jammu Region, with over 50 thousand pilgrims visiting Chandi Dham Machail at any given time. The Chandi Mata has mostly materialised elsewhere in the Himalayan area over the years. At Jammu, she has her origins in the Mahalaxmi Mandir at Pacca Danga and subsequently in Bhadarwah, where her Chhari (Holy Mace) begins every year in August. Situated around 306 kilometres from Jammu via road (Jammu-Batote) (120 kilometres), Batote-Kishtwar (121 kms), Kishtwar-Atholi – Gulbgarh-65 kms), and then on foot to Machail Mata, which is just 30 kilometres.

Though the terrain is too difficult to climb, one feels very delighted in conjunction with lovely pilgrims repeating Jai Mata Dip Jai Chandi Mata. The entire course is peppered with yatries of all colours and styles. Layondee, S Kunderpul, Chishoti, Hamooree, and thence Machail Matas frightened temple are the key stop-overs on way from Atholi Gulabgarh. The entire area is landlocked and surrounded by lushgreen, lively, and healthy vegetation of pine (Deodar, Kail, Fir, Spruce), oaks, bushes, and herbs. Atholi is the junction of the rivers Chandra and Bhaga, and you follow brave Bhaga for 30 kilometres, sometimes following you and sometimes going against your course with roaring echoes and foaming firry liquid fires so beautifully against vertical cliffs. Chhari begins on foot from Bhadarwah town on August 19th, headed by Punjari of Bhadarsah temple and surrounded by joyful followers.

Road …………………..Constructed motor able road for Sumo, Winger etc. up to Ikhala, but bus services are operated up to Palmer only 20 Kms. north of Kishtwar.

Distance from Kishtwar : Beyond 40kms north-east of Kishtwar town

How to be reached : By bus or taxi upto Ikhala (Tangdoor) (40kms) and thence From on foot or horse back

Kishtwar has a unique location in Jammu and Kashmir because of the Kishtwar High Altitude National Park, which covers an area of 2190.50 square kilometres and provides a natural habitat to a variety of animals and birds. This sanctuary has an altitude range of 1700 to 4800 metres. The National Park includes the catchment areas of the Kiber, Nanth, and Kiyar Nallas, which all flow south-west into the Marwah river, locally known as the Mariv Sudir, which enters the Chenab at Bhandarkoot Kishtwar town. The topography is usually harsh and steep, with small valleys bordered by high mountains that open up in their higher glacial portions. The region is located in the core crystalline zone of the vast Himalayas. The rocks are heavily folded in parts and are mostly formed of granite, gneiss, and schist, with the rare bed of marble.

Kishtwar district, surrounded by snow-capped mountains, emerald valleys, fruit orchards, whispering deodar and pine forests with their rich flora and fauna, gurgling streams meandering through lush green meadows sprinkled with colourful natural wild flowers, exudes grandeur that is difficult to match. The valleys of Chhatroo, Dachhan, Marwah, Paddar, and Warwan, in particular, offer enthralling and mesmerising natural beauty, with a significant potential for adventure, pilgrimage, eco, health, rural, cultural, and film tourism. These areas, with lush green forests, humming heights talking to the sky, green meadows and alpine pastures in the lap of high rising mountains where sight of neighing horses, bellowing cattle, bleating sheep and goats which have ascended from hot plains, display an absorbing view in summer months and remain under a white blanket of snow during the winter, are unexplored and unexpolited due to limited road connectivity.

We discover a rising road from Chingam onwards. We arrive to Synthen Maidan, 60 kilometres from Kishtwar, over a zigzag route and woodland cover. This location’s alpine pastures are unrivalled in natural splendour. The pleasant and salubrious environment of the area refreshes visitors. On the foot of the Synthen-top, we discover endless slopes and simple meadows. The location is suitable for activities such as paragliding, horseback riding, rock climbing, and winter sports such as skiing and skating. The Synthen Top, located 24 kilometres ahead of Synthen Maidan, is 3784 metres above sea level. When one reaches the summit, one feels at the top of the world, light and distant from earthly concerns.

The view of the surrounding region is lovely. The Agriculture Department’s potato farm here produces a good potato harvest that is exceptional in quality and delightful to eat. The descending road from Synthen top goes to Daksum, a health resort in the Kashmir valley’s Anantnag district.

Best Time to Visit in Kishtwar

Kishtwar is a year-round attraction since it may be visited throughout the year. The optimum time to visit this location, however, is from May through October.

How to Reach Kishtwar

District Headquarter Kishtwar is located about 210 Km. from Jammu and about 280 Km. from Srinagar.  There are two National Highways connecting the District viz.NH-1A and NH-1B.  The general approach to the whole of the District is through road transport i.e. Taxi, Deluxe Buses etc. Visitors coming from other parts of the country can also utilize the Flight services up to Jammu/Srinagar and train services up to Udhampur.  From Jammu / Srinagar, road transport services are easily available to reach District Headquarter Kishtwar and to other Tourist Spots of the District.  One can have the view of River Chenab while approaching to Kishtwar.

The main hub to reach Kishtwar is Jammu. It is approximately 235 Kms form Jammu to Kishtwar by road. There are lot of Deluxe Buses operated by various Private agencies as well as J&K SRTC. The whole journey costs about 6 -7 Hrs. form Jammu and 5 – 6 Hrs from Udhampur by bus.