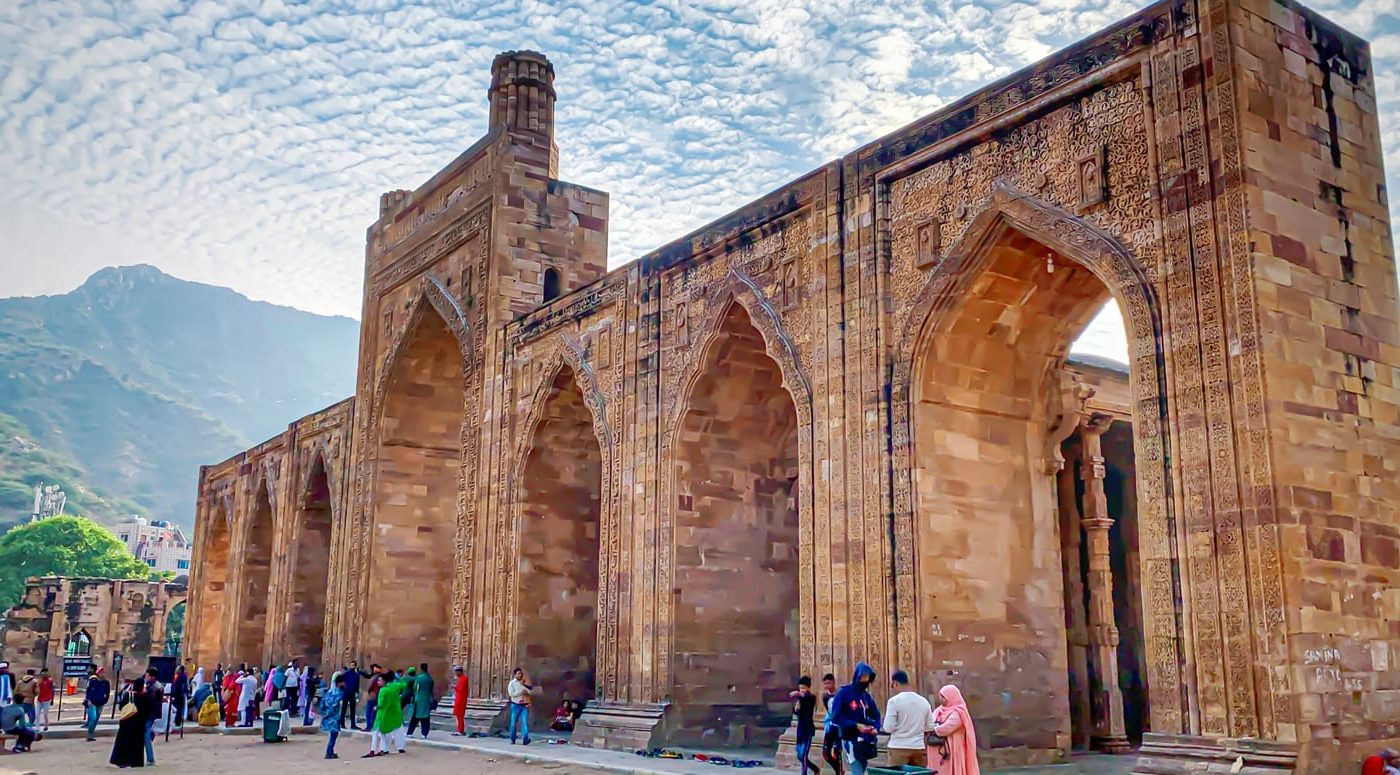 Best Places to Visit in Ajmer

‘Adhai Din Ka Jhonpra,’ located near the Dargah Sharif, is a feat of great creativity in Indo-Islamic architecture. It has a courtyard that is enclosed on all four sides and a front screen wall with seven pointed arches inside the space. It was formerly a Sanskrit College within a temple enclosure, but Mohammad Ghori destroyed it and rebuilt it into a mosque. The name Adhai Din Ka Jhonpra was given to the location in the latter part of the 18th century when fakirs began to gather here under the Marathas’ reign to commemorate the Urs anniversary of the death of Pir Panjaba Shah, which lasted two and a half days (Adhai Din). Fakirs used to dwell in Jhonpras (huts), which is how the name Adhai Din Ka Jhonpra came about.

This lovely manmade lake was named for Anaji Chauhan and was erected in the 12th century. Shahjehan, the Mughal Emperor, built the ‘Baradari’ (or Pavillion). The massive embankment is an excellent representation of corporate life in Ajme during the period.

The Saint, Khwaja Moin-ud-din Chishti, was laid to rest at Dargah Khwaja Saheb. It was built in the 13th century and is commonly referred as as ‘Gareeb Nawaaz.’ The Dargah is located in Ajmer and houses the famed saint’s burial. The Dargah’s entrance gate is named Nizaam Gate, and it is followed by Shahjahani Gate, which was built by Shah Jahan. Buland Darwaaza follows Shahjahani Gate. Every year, the Urs flag is hoisted on the Buland Darwaaza to commemorate the start of Urs.

Dargah is currently owned by an international trust. The government has established a Dargah committee, which oversees Dargah and sponsors numerous philanthropic institutions such as guest rooms and dispensaries. Dargah ceremonies are overseen by inherited priests called as Khadims.

Pushkar: Located a few kilometres from Ajmer, Pushkar is a popular tourist and pilgrimage site as well as a satellite town of Ajmer. It is famed for Pushkar Lake and the 14th century Brahma Temple at Pushkar, which is devoted to Lord Brahm. According to the Padma Pura, Pushkar is a major pilgrimage site for Lord Brahm. Lord Brahma Temple is the only one in the world, and it is only found at Pushkar Lake, Rajasthan.

Taragarh Fort: It is said to be India’s oldest hill fort. It rises at a height of 2,855 feet above sea level, and between 1,300 and 1,400 feet above valley at its base; and it is partially surrounded by a wall 20 feet thick and as many high, composed of massive blocks of stone that are cut and squared and are around two miles (3 km) in circle. The Chauhan monarchs were based on this hill fort that guarded Ajmer. It was built on the pinnacle of Taragarh Hill by King Ajaypal Chauhan and overlooks Ajmer. The battlements run along the hill’s crest.

When it fell to the British Raj, the fort was destroyed on Lord William Bentinck’s orders in 1832 and transformed into a sanatorium for British troops stationed in Nasirabad. It has the Ganj Shahldan, a shrine of a Muhammadan saint named Saiyid Husain. The Nur-chashma, a garden-house used by the Mughals, and a water-lift begun by Maldeo Rathor to raise water to the Taragarh castle still survive in the older city, lying in the valley beneath the Taragarh hill and now abandoned.

Ajmer Sharif Dargah: It is a shrine of Khwaja Moinuddin Chishti located at the foot of Taragarh hill, and it consists of several white marble buildings arranged around two courtyards, including a massive gate donated by Nizam of Hyderabad, and Akbari Mosque, built by Mughal emperor Shah Jahan and containing the domed tomb of the saint. Every year, Akbar and his queen would walk here from Agra to fulfil a commitment he made when he begged for a son. Large pillars known as “Kose (‘Mile’) Minars” (Kos Minar) were erected at intervals of around two miles (3 km) along the entire route between Agra and Ajmer to mark spots where royal pilgrims rested every day; they may still be seen today, one of which is opposite the private bus station in Ajmer City. Every day, over 125,000 pilgrims visit the site. Every year on the 6th and 7th of Rajab, Khwaja Moinuddin Chishti’s Urs is commemorated.

Soni Ji Ki Nasiyaan : It is an architecturally rich Jain temple built in the late nineteenth century, with a spectacular image of Ayodhya carved from 1000 kg of gold in its main chamber Swarna Nagari “City of Gold.”

Mayo College: Lord Mayo proposed the establishment of the institution in 1875 as a place where the sons of leaders and nobles could obtain an education that would prepare them for high positions and vital duties. It was dubbed “Indian Eton” since it was attended by a number of Indian princes. The main structure, which is made of white marble, is a famous example of Indo-Saracenic architecture. Lord Mayo’s memorial marble statue stands in front of the college. The boarding houses are laid out in the shape of a horseshoe, with the college in the centre of the base. Some of the Native States constructed boarding-houses, while the Government of India gave the college park, which was once the site of the old Residency, and erected the main building, the principal and vice-mansions, principal’s and the Ajmer boarding-house. It paid the salaries of the English employees.

The college’s foundation stone was placed in 1878, and the structure was dedicated by the Marquis of Dufferin in 1885. Rudyard Kipling’s father, John Lockwood Kipling, was the principal of Mayo College.

Akbari Fort & Museum: The museum in the city was previously the home of Prince Salm, the son of Emperor Akbar, and now exhibits a collection of Mughal and Rajput armour and sculpture. This is a beautiful specimen of Mughal architecture, built on a commission from Akbar in 1570. Salim, posing as Emperor Jahangir, read out the firman allowing the British East India Company to trade with India. It’s a gigantic square structure with octagonal bastions at each corner. It served as the administrative centre under their and the Marathas’ reigns. The emperors appeared in state here, and criminals were publicly executed, according to Sir Thomas Roe.

During British control, the interior was utilised as a magazine until 1857, and the centre building was used as a tahsil office. Outer city walls from the same era are linked to the fort. These encircle the city and are pierced by the gates of Delhi, Madar, Usri, Agra, and Tirpolia.

Anasagar Lake: Maharaja Anaji (1135–1150 CE) created this famous man-made lake.  The Daulat Bagh, a park designed by Emperor Jahangir, is located near the lake. Between the garden and the lake embankment of the Ana Sagar, Emperor Shah Jahan later placed five pavilions known as the Baradari, which supports the exquisite marble pavilions erected as pleasure-houses by Shah Jahan. Furthermore, the embankment has the Archaeological site of the ancient hammam (bath-room). Three of the five pavilions were once used as houses for British officers, and the embankment was surrounded by office buildings and gardens. The dwellings and enclosures were ultimately demolished in 1900–1902, when the two south pavilions were re-erected, the marble parapet was completed, and the embankment was restored to its original form as far as possible.

Lake Foy Sagar: It is a gorgeous artificial lake that was built as part of a famine relief project in 1892 about 3 miles west of the city. It provides spectacular vistas of the Aravali mountain range as well as migrating birds. During colonial times, it served as the city’s water source. The water was delivered to the city and suburbs via underground pipes. The lake has a capacity of 150,000,000 cubic feet.

The greatest time to visit Ajme is from October to March, which includes the Monsoon and Winter seasons.

How to Reach Ajmer

The city does not have its own airport, but visitors from all across the country may fly into the neighbouring Jaipur airport and then drive to Ajmer. The Jaipur airport is around 130 kilometres from the centre of Ajmer. Ajmer is accessible from both Delhi and Mumbai by flights from Delhi to Jaipur and Mumbai to Jaipur.

The city is easily accessible by vehicle since it is connected to all of Rajasthan’s major cities by a wide and well-maintained network of highways. Jaipur, the state capital, is around 130 kilometres away from Ajmer. Ajmer is accessible by bus from Delhi (391 kilometres), Ahmedabad (525 kilometres), Jaipur (134 kilometres), Udaipur (163 kilometres), Jodhpur (205 kilometres), Bikaner (233 kilometres), and other places. There are excellent bus and taxi options available. Buses run frequently between Ajmer and Delhi and other surrounding places.