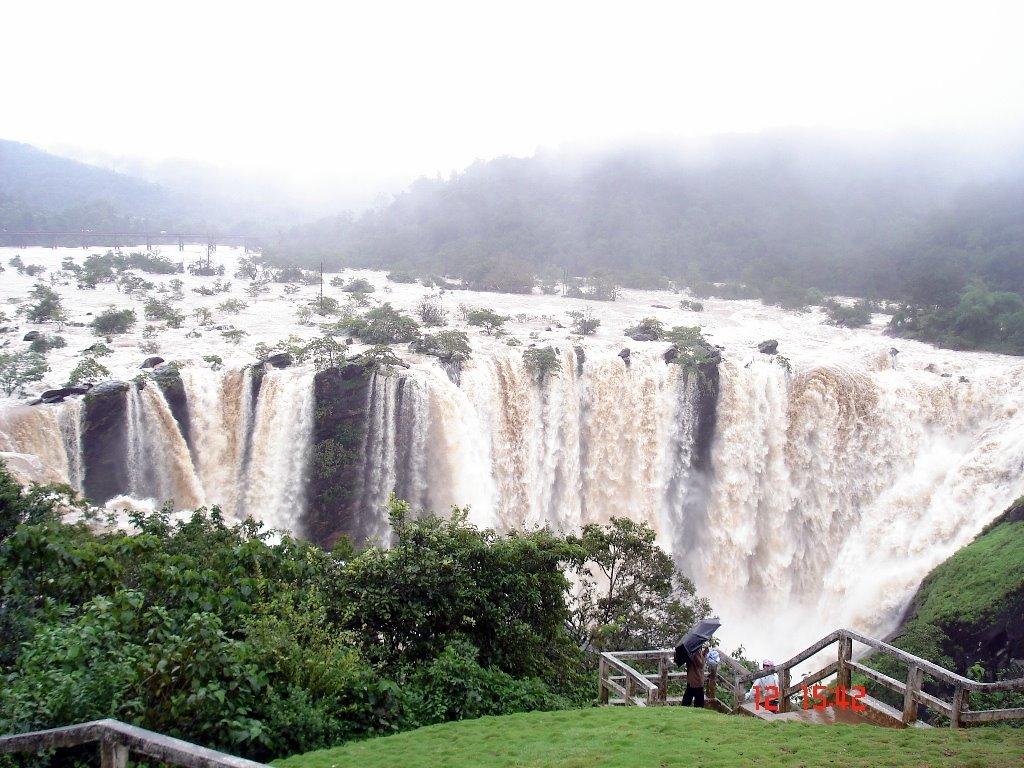 Shimoga (Shivamogga) is a city in the Indian state of Karnataka. On the lawns of Shivappa Nayaka Palace Museum are stone sculptures from the 16th to 18th centuries. The massive, contemporary Sacred Heart Cathedral is nearby. Egrets and cormorants may be seen in Mandagadde Bird Sanctuary. Elephants, tigers, and panthers live at the Bhadra Wildlife Sanctuary. Jog Falls, located northwest of Shimoga, are a strong, tall waterfall. Shimoga is a great place to visit if you’re looking for some adventure. Trekking and river rafting are both options. The tiger and lion forest reserve, as well as Jog Falls, make it an ideal location for wildlife enthusiasts. You may travel there for a wonderful weekend trip with your coworkers, family, and friends.

According to traditional derivations, the name Shivamogga refers to Lord Shiva (‘Shiva – Mukha’ – Shiva’s Face,’ ‘Shivana – Mogu’ – Shiva’s Nose,’ ‘Shiva – Mogge’ – Shiva’s Flower Buds). According to mythology, the location housed the ashram of the legendary sage ‘Durvasa,’ who was known for his fierce temper. He used to have a pot of sweet herbs simmering in the oven. Once upon a time, several cowherds who happened upon it sipped the liquid out of curiosity and named the location ‘Sihi- Moge’ (Sweet Pot), which was eventually shortened to ‘SHIVAMOGGA’.

Joga Falls, located in the Sagara taluk of the Shivamogga region, is India’s second tallest plunge waterfall. It is a segmented waterfall that may become a plunge waterfall depending on the amount of rain and the season. The falls are a popular tourist attraction, ranking 13th in the world according to the waterfall database. Gersoppa Falls and Jogada Gundi are other names for them.

The birds may be heard tweeting 32 kilometres from Shivamogga city, on the road to Thirthahalli. This location serves as a rest stop for birds travelling from all over the world. The location is surrounded by deep, lush green forest, and the flow of the Tunga River has created a little island that adds to the splendour. Migrating birds can find refuge on the island’s lush forest. During the breeding season, birds such as Egrets, Bellakki Cormorants, Darters, Snake Birds, and others travel from all over the world. For bird observation, a high platform has been created on the banks of the Tunga River. Boats are accessible for a more in-depth look.

This bird sanctuary is remarkable for a variety of reasons, including the fact that it is the only refuge located in the heart of deep woodland. Guduvi is one of Karnataka’s five most notable bird sanctuaries. The location is 16 kilometres from the Shivamogga district’s Soraba taluka. This bird sanctuary has a total size of 73.68 Hectares. According to a 1993 census, this location is home to 191 different bird species. This birds are protected by a natural lake and woods. White Pebis, Stone Bill, Egret, Cormorant, Snake bird, Heron, and other notable birds have been discovered. Various birds migrate from various regions of the world to reproduce at different times of the year. A platform has been created to get a better sight at the birds.

10 kilometres from Shivamogga on the way to Sagar town Lions, tigers, and other wild creatures are free to wander the deep woodlands. The lion-tiger safari, which began in 1988, is an excellent picnic location. The safari is situated across 200 Hectares of lush woodland. You may experience nature’s elegance, richness, colour, and amazement while catching enthralling glances of Lions, Tigers, Cheetah, Bear, Deer, and uncommon migrating birds as they amble around in lush environment. The forest department organises regular relaxation and sight-seeing excursions for guests.

Elephants recite their lessons on the trip to Thirthahalli from Shivamogga, 14 kilometres distant from the city. Yes, it’s not a joke; several elephants are being taught by training specialists here. Elephants from neighbouring forests bathe here before returning to their jungle home. Every morning, these gorgeous creatures waddle down to the water, where they playfully scrub their bodies and quench their thirst before leaving before the sun’s rays get stronger. They leave to complete their daily tasks, only to return the next day. Get there before 9 a.m. to see these mammoths at play in the lake.

The breathtaking sunset location. Location: On the route to Udupi, 35 kilometres from Thirthahalli falls, there is a little town with a large name named AGUMBE. It is located at a height of 2725 feet above sea level.

What Makes Agumbe Unique: Agumbe is also regarded as the “Chirapunji” of South India since it receives the most rainfall in the country. This location draws travellers during the summer and winter seasons due to its spectacular sunsets. The area is bordered by densely forested hills, little streams, and ghats. The area comes alive at sunset, when the sun sets in a variety of colours, colours, and forms.

Best Season to Visit: November to May

A magnificent and beautiful mountain gives the ideal respite from the busy pace of modern life. Hikers’ paradise, the location draws a large number of trekkers from all around Karnataka. Kodachadri is 1411 feet above sea level and 115 kilometres from Shivamogga. A heavenly hilltop retreat with sweeping views of the Western Ghats. It is covered with magnificent evergreen woods. The initial part of the slope is quite steep and tough to climb. The slope drops almost perpendicularly for 4026 feet to the west, meeting the South Kanara woods below. The water looks to be pretty close, and on a clear day, you can see ships passing by. Kollur, a well-known temple town, is 12 kilometres distant. The steep slopes present a challenge to the trekkers, making for an exciting trekking experience. When you reach the top of the hill, you feel like you’re on top of the world.

Kundadri hill may be found on the approach to Agumbe from Thirthahalli, 9 kilometres from Guddekeri in Begar. A thrilling location for trekkers. You can also get to the hilltop via tar road, but it’s a jarring experience if you hike up the mountain through the shorter path. When you reach the summit, you will come upon the Parshwanath Chaityalaya, a stone edifice. Kundadri Hill is really a single massive monolithic granite structure with several outgrowths. A rocky stone road climbs to the summit of the hill. The twists and bends of the Thirthahalli-Agumbe road can be seen from the hilltop. This location is also a Jain pilgrimage site. It would be a good idea to bring some small snacks and continue ascending the hill.

Honnemaradu, located around 25 kilometres from Sagar town on the route to Jog Falls, attracts adventure seekers. The location is on the Sharavathi River’s backwaters. Adventurers, Bangalore, looks after this location. Kayaking, wind water surfing, and other water activities are available. You may acquire accommodation, meals, and water sports equipment for a modest fee. One thing to keep in mind before visiting this location is that no alcohol, gutka, or non-vegetarian goods should be brought with you. All of these goods are prohibited at this location.

The world-famous Jog Falls are the most spectacular spectacle in the entire western area of Karnataka.

It is located on the boundaries of Shivamogga and North Canara, 100 kilometres from Shivamogga city.

What Makes It Unique: The spectacular sight is that of the river Sharavathi leaping into the abyss from a height of 900 feet to form one of India’s tallest waterfalls. The Sharavathi River erupts in four separate waterfalls. The first of these falls is known as the ‘Raja’ — the most impressive, an uninterrupted sheet of water, the Raja plunges into the vapor-shrouded pit 900 feet below. Raja is joined by ‘Roarer’ a few hundred feet down, with a tremendous rush. The ‘Rocket’ leaped down with amazing speed in a sequence of cascades. ‘Rani,’ she says, slipping away with feminine ease. The wild and picturesque landscape surrounding it, which is covered in a plethora of lush flora, amplifies the impression significantly. The stairs chiselled into the rocks will take you to the bottom of the fall and shower you with vaporous spray that bounces off the rocks.

Around Jog, there is also a beautiful view of the Linganamakki dam, which was erected across the Sharavathi River and is 1819 feet above sea level. This dam serves as the primary feeder reservoir for Shivamogga’s Mahatma Gandhi Hydroelectric Project.

Transport: The area is well connected by train and road from Shivamogga city, and there are several government and private buses that go between Shivamogga and Jog Falls.

The most frequent term for waterfalls in Karnataka. Shivamogga is also proud to have a waterfall known as Abbey Falls. The falls are located 4 kilometres from Agumbe, Thirthahalli Taluka’s sunset point. Natural splendour surrounds the falls, which are flanked by lush green forests.

This eye-catching water falls may be seen 10 kilometres from Thirthahalli on the road to Hosanagar at Aralsuruli. The Sharavathi River takes a stunning jump here to build this magnificent waterfall.

This waterfall is located in Hosanagar Taluka, near Nittur. To get to the falls, go through the steep slopes surrounded by deep, lush forest. Don’t forget to bring your meal.

Gajanur is located 10 kilometres from Shivamogga city on the route to Thirthahalli. Tunga Dam is located here. A great picnic location for the locals. The dam is now closed to the general public while the dam’s height is increased and building work is underway.

It is located 28 kilometres from Shivamogga, near Kuvempu University. The dam is built across the Bhadra River and stands 194 feet tall. The Bhadra river has generated a lot of islands, and you may take a boat trip around these islands.

How to Reach Shivamogga (Shimoga)

The Shimoga airport, about 6 kilometres from the city centre, is presently under development. The Mangalore International Airport is the closest airport to Shimoga and is chosen by visitors. The airport has flights to Delhi, Chennai, Hyderabad, and Mumbai, among other Indian cities. Several major airlines, including Air India Express, Jet Airways, and Air Pegasus, fly to overseas destinations such as Muscat, Dubai, Abu Dhabi, and Kuwait. Alternatively, you may fly into Bangalore’s Kempegowda International Airport, which is serviced by a variety of airlines and serves destinations such as Mumbai, Goa, Lucknow, Hyderabad, and Kolkata.

Trains to and from Bangalore and Mysore stop at Shimoga Nagar Railway Station. However, no direct trains are available from other important Indian cities. Inter City Express Connection and Shivamogga Express are the most popular trains that depart from this rail station.

Shimoga is served by the Karnataka State Road Transport Corporation (KSRTC), which connects it to nearby cities such as Bangalore, Hubli, Sringeri, and Dharmastala. Shimoga is connected to other surrounding regions by the Sholapur-Mangalore Highway (National Highway 13) and the Bangalore-Honnavar Highway (National Highway 206). A bus trip from Bangalore to Shimoga takes between five and a half and seven and a half hours and fifteen minutes. The time varies on the bus type and operator chosen, as well as the current traffic. From Bangalore to Shimoga, Seabird Tourists, S.R.E. Travels, Sri Benaka Travels, and Sri Krishna Tour and Travels offer services.