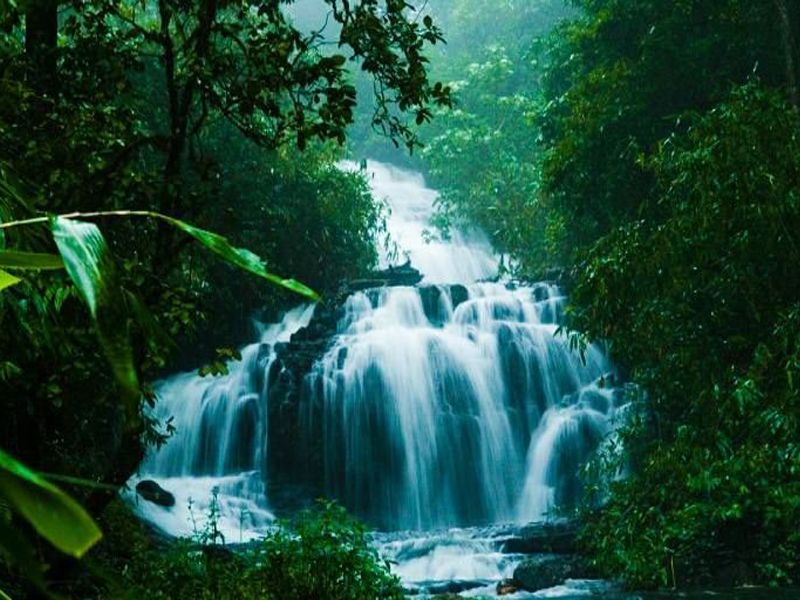 This region is known for its numerous camping and hiking routes, beautiful waterfalls, caverns, bird-watching opportunities, flora and wildlife, and an abundance of magnificent vistas. Over the years, this region has become a popular tourist destination.

Wayanad is a district in Kerala, India’s southwest state. The Wayanad Wildlife Sanctuary, in the east, is a lush, wooded region with high altitude zones, home to Asiatic elephants, tigers, leopards, and egrets. Edakkal Caves, located in the Ambukuthi Hills to the south, feature ancient petroglyphs, some of which date back to the Neolithic period.

Best Places to Visit in Wayanad

Nature enthusiasts and photographers flock to the majestic Phantom Rock and its surrounds. The skull-shaped rock formation is a one-of-a-kind specimen of nature’s ingenuity. It’s a terrific location to unwind and contemplate the natural beauty of the area.

This region, located to the north of the Wayanad district, is home to a diverse range of plants. Wildlife jeep safaris are available twice a day, and you are sure to see a variety of animals and bird species in their natural habitat during the 1.5-2 hour drive. A lake where animals congregate for a drink is a key draw here. The forests include a variety of forest types such as tropical moist dry deciduous, pockets of semi-evergreen forests, and trees and plants such as bamboo and long spiky ginger shrubs. Teak, eucalyptus, silver oak, and rosewood plantations cover roughly one-third of the sanctuary.

The Banasura Sagar dam, India’s largest earthen dam, is located in Wayanad. The dam, which was erected in 1979, spans the Karamanathodu tributary of the Kabani River. It is named after the Asura monarch Banasura, son of Mahabali, who is claimed to have performed a terrible penance in the nearby hills. The dam is entirely composed of gigantic stacks of boulders and stones, and it has become a popular tourist destination known for its beautiful vistas and boating cruises.

The Edakkal Caves, located around 1200 feet above sea level, are among the oldest human sites ever unearthed. There are visual images and carvings inside the caves that show the presence of ancient human settlements in the area.

The Edakkal Caverns, despite their name, are not caves. They are part of a prehistoric rock shelter that formed naturally when a large boulder became jammed between two larger boulders. Edakkal derives its name from the Sanskrit phrase “a stone in between.”

The Edakkal cave murals are astounding in their grandeur and complexity, but their origins remain a mystery. They have been a source of surprise and astonishment for tourists and historians alike since their discovery in 1895.

The engravings are many and diverse. Here, human figures, animals, utensils, vehicles, everyday happenings, and scripts in several language scripts have been uncovered. The variety of engravings suggests that the Edakkal caverns were inhabited multiple times throughout history. The earliest of them date back to 6000 B.C., to the Stone Age of man.

Edakkal’s charms do not end with the carvings. The Muniyaras, or ancient burial sites, uncovered in these hills have provided a plethora of old earthenware and ceramics. The Wayanad Heritage Museum now houses the majority of the objects recovered here.

This breathtakingly beautiful spot is three kilometres from Ambalavayal and 25 kilometres from Kalpetta. The Edakkal cave in the Ambukuthy mountain is not a true cave. It is merely “a cleft of 96ft. long and 22ft wide in the rock,” according to the India Antiquary (Vol.XXX, page – 410) and reported in the District Gazette, Kozhikode. It is a fissure formed when a corner of rock splits away from the main body owing to natural reasons. The cleft and fissure are both 30 feet deep. The fact that a big boulder weighing many tonnes has fallen in the other portion of the large chasm, producing a roof over a large chunk of it, is what distinguishes it as a cave to the average spectator.

The rock wall has numerous intriguing carvings that depict human and animal characters, as well as objects of human usage and symbols. These engravings speak of a highly cultured pre-historic people and motivate archaeologists and historians to reinterpret Wayanad’s and Kerala’s history as a whole.

The hills, cliffs, and valleys that contribute to Wayanad’s distinct character offer several opportunities for adventure tourism. Trekking to the Chembra peak is a dangerous climbing adventure. Chembra mountain, Wayanad’s highest point, is located near Meppady town. It takes nearly a day to hike to the summit of this peak. Tourists can also spend one or two days at the peak’s temporary campgrounds. The District Tourism Promotion Council rents out guides, sleeping bags, canvases, huts, and trekking equipment. The picturesque grandeur of Wayanad, which can be seen from the top of Chambra, is breathtaking.

Kuruva Island, 950 acres of evergreen forest on the tributaries of the east flowing river Kabani, is a great picnic area away from city life. The island is deserted. The sovereigns of this supernal kingdom are rare species of birds, orchids, and herbs. It is 17 kilometres east of Mananthavady and 40 kilometres north of SulthanBathery.

Muthanga, located 16 kilometres east of SulthanBathery, is extremely close to the Karnadaka border. The Muthanga wild life sanctuary, which covers an area of 345 square kilometres, is the largest home of wild animals in Malabar. This sanctuary is home to elephants, spotted deer, bison, tigers, cheetahs, wild bears, and other animals. Here, the Forest Department has facilities for tourists to ride elephants.

It is a natural fresh water lake surrounded by lush green mountains. The weather is delightful, the scenery is hypnotic, and the environment is pristine. There is an aquarium and a greenhouse on the premises. There are also boating amenities. Pookot also has spices and handcraft products for sale. The lake has an area of 8.5ha and a maximum depth of 6.5 metres. This lake is located three kilometres from Vythiri.

Kanthanpara and its environs are very nice despite being smaller and less popular than Sentinal Rock Waterfall. It is an easy stroll away from the main road and is ideal for a picnic.

This is India’s greatest earth dam. When the dam is full, the geography here is such that many islands will form upstream of the dam. Tourists will be mesmerised by these islets against the backdrop of the Banasura mountains.

Best Time to Visit Wayanad Wayanad is best visited between October and May. The months of December to February are significantly cooler than the rest of the year, with temperature drops of up to 10°C. As a result, many visitors consider this period to be the finest time to visit Wayanad.

How to Reach Wayanad

The Cochin International Airport in Nedumbassery is the closest airport to Thrissur. The distance between Thrissur and this Airport is 50 kilometres. From Thrissur, it is easily accessible by road.

The Thrissur Railway Station is one of India’s main stations. In the north of Thrissur, there is a station named Poonkunnam. Passenger trains as well as a few more express trains stop here. The most important destination of devotion in Kerala, Guruvayur, is located near Thrissur and is well linked by train.

By road, Thrissur is accessible from the districts of Ernakulam (Cochin), Palakkad, and Malappuram. National Highway 47 goes through Mannuthy, which is 6 kilometres from Thrissur city. This route is served by a large number of private buses as well as KSRTC vehicles.