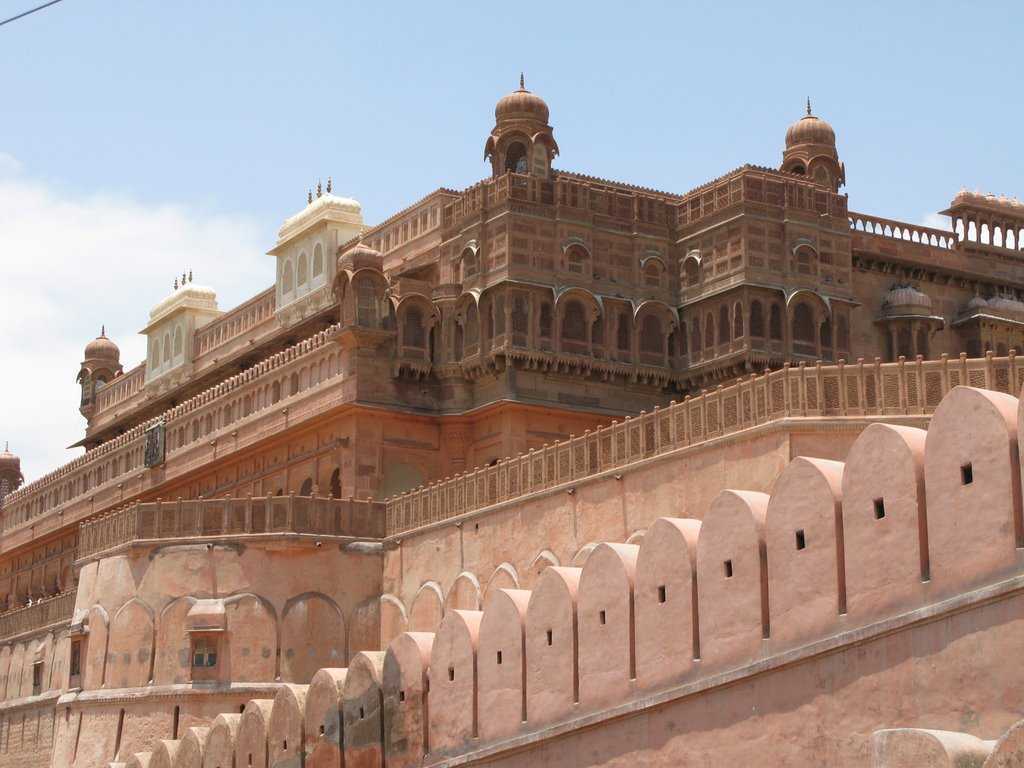 Bikaner is a city in the Indian state of Rajasthan, located east of the Pakistani border. The Thar Desert surrounds it on all sides. The city is notable for the Junagarh Fort, a massive complex of magnificent structures and halls built in the 16th century. The Prachina Museum, located within the fort, houses traditional fabrics and royal portraits. Nearby, the Karni Mata Temple is home to a large number of Hindu believers who see rats as sacrosanct. Bikaner is known for both its sweets and its savoury Bikaneri Bhujia. It’s also recognised for its handicrafts, leather goods, and the world’s largest camel farm. Jharokas, which are elaborately carved, are well-known in the city. On the windows of forts and havelis, these stone screens may be found.

Best Places to Visit in Bikaner

Junagarh is an impregnable bastion that holds the distinction of having never been captured. It was constructed in 1588 AD by Raja Rai Singh, one of Emperor Akbar’s most distinguished generals. The fort complex houses some magnificent palaces constructed in red sandstone and marble and visitors can feast their eyes on an attractive assortment of courtyards, balconies, kiosks and windows.

Junagarh is an invincible fortress that has never been taken. Raja Rai Singh, one of Emperor Akbar’s most prominent generals, built it in 1588 AD. The fort complex contains several spectacular buildings made of red sandstone and marble, and tourists can feast their eyes on an appealing array of courtyards, balconies, kiosks, and windows.

The Camel National Research Centre is located 8 kilometres from the city. This camel research and breeding centre is Asia’s only one of its kind. The government of India manages the centre, which is spread out over 2000 acres of semi-arid territory.

This magnificent palace was commissioned by Maharaja Ganga Singh. This architectural marvel was created in 1902 to honour his father, Maharaja Lal Singh, and is entirely formed of red sandstone. Sir Swinton Jacob conceptualised the design, which combines Rajputana, Islamic, and European architecture to create an oriental fantasy.

Bikaner is home to various havelis (aristocratic mansions), the most well-known of which being the Rampuria Group of Havelis. Every part of the havelis – jharokhas (casements), entrances, latticed windows, divankhanas, gumaharias, or basements – is simply exotic, built of dulmera (red) stone. Every jharokha is adorned with leaves and flowers, adding a lovely touch. These huge havelis are lavishly embellished with high-quality gold work. Their dankhanas (drawing rooms) transport you back in time to the Mughal and Rajput eras. There is a lot of Victorian influence in their design as well. The wood carvings in Rampuria Havelies are extremely exquisite. Spaced close to each other, the havelis are definitely a sight to behold.

This museum, housed in the magnificent Junagarh Fort, contains royal garments, fabrics, and accessories of Rajasthani royalty. The ‘Poshaks’ (women’ clothing) are a relic of a now-extinct art of traditional designs, styles, and workmanship. The shown family pictures tell the tale of how changing cultural settings inspired the method of immortalising former monarchs.

The Karni Mata Temple in Deshnok is a stunning stone and marble edifice that houses an image of Karni Mata. A’mukut’ (tiara) and garlands are used to embellish the image. On either side, she is accompanied by portraits of her sisters and Avad Mata’s sisters. The presence of kabas (rats) that walk freely within the temple grounds is well recognised across the world.

Main Temple Bhandasar is a 15th century temple dedicated to Sumatinathji, the 5th Tirthankar (a person who has mastered the cycle of life, death, and rebirth and paved the way for others to attain nirvana), and is one of Bikaner’s oldest monuments. Intricate mirror work, murals, and gold leaf paintings are featured in the temple’s design. Devotees from all around the country flock to the temple.

The Kodamdesar Temple is located 24 kilometres from Bikaner. Rao Bikaji installed Kodamdesar Bhainru Ji sometime during the first three years after his arrival from Jodhpur. This place of worship was originally chosen to lay the foundation of Bikaner, but it was later relocated to its current location.

The monarchs of Bikaner considered Lord Laxminathji (Lord Vishnu) to be the true king of Bikaner, and themselves to be his Deewans or Ministers. This marble and red stone temple was built to house Lord Laxminath, whose throne is located here.

This Shiva temple is guarded by a high wall and located only 6 kilometres from Bikaner. It was commissioned and built in the 19th century by Maharaja Doongar Singh to memorialise his father, Maharaja Lal Singh. Beautiful wall paintings, a four-faced black marble Shiva statue, and a bronze Nandi statue facing the Shiva-Lingam are the features of this red stone temple. The temple also has two big water reservoirs called as bawaris.

Gajner is the Thar’s unrivalled treasure. The Gajner Palace was built on the banks of the lake by Maharaja Gaj Singh ji of Bikaner in 1784, and was later finished by the famous Maharaja Ganga Singh of Bikaner. It was intended to be a hunting and relaxation lodge for the royal family as well as visiting visitors. It has since been transformed into a hotel.

A lush green forest 32 kilometres from Bikaner on the Jaisalmer route is a shelter for nilgai, chinkara, black deer, wild boar, flocks of imperial sand grouse, and many other kinds of migratory birds who make the expansive woodland their winter home.

The royal crematorium is located 8 kilometres from Bikaner. It contains several magnificent chhatris (cenotaphs), each dedicated to the remembrance of a Bikaji dynasty ruler and located on the exact area where each of them was cremated. Maharaj Surat Singh’s chhatri is a great example of that era’s architecture. Devi Kund also includes cenotaphs for 22 female royal family members who died before Maharaja Gaj Sigh Ji committed sati. There is also one cenotaph of a ruler’s Sata (male sati). The Chhatri of Maharaja Surat Singh is entirely made of white marble and features beautiful Rajput murals on the ceiling.

The majority of visitors to archives are scholars and academics who come to study the historical administrative records that are kept here. Some documents date back to the Mughal period and include Persian Farmans, Nishans, Manshurs, and so on. Records created throughout the administration of Rajasthan’s many princely states can also be found here. This exceptional collection is quite valuable.

Hindus visit Kolayat as a place of pilgrimage. Every year, both locals and pilgrims from faraway regions flock to this temple complex. History tells of Kapil Muni, a Shankya yoga enthusiast, who was so taken with the tranquillity of this region that he interrupted his voyage to the northwest and stopped here to do a ‘tapasya’ (penance) for the salvation of the world. The town’s principal attractions include its numerous temples, ghats, sacred lake, and town market. Kolayat is approximately 50 kilometres from Bikaner.

A community rich in ethnic, rural, and cultural life located 45 kilometres from Bikaner on the Jaipur Road. In Katariasar, visitors can walk over sand dunes and watch the sunset over the desert scenery. This village’s greatest draw is its people, the Jasnathjis, who are fire dancers. Chinkaras, desert foxes, rabbits, peacocks, parrots, and partridges can all be found here in large numbers.

If you want to see vultures, Bikaner in Rajasthan is one of the greatest spots to go. However, a 12-kilometer trip from the city brings you to Jorbeed. If you’re a birder, Jorbeed is your ‘hotspot of opportunity.’ Jorbeed is a great place to look for raptors. Steppe Eagles, Griffon Vultures, and Egyptian Vultures are as common in this area as crows. A spot you’ll have to get used to, there isn’t a single tree here that doesn’t have some kind of raptor perched on it. A trip to Jorbeed is all about watching Asia’s greatest gathering of eagles and vultures, and if you’re lucky, you might even see the rare yellow-eyed pigeon. Jorbeed is a birder’s delight, with thousands of majestic raptors dotting the landscape.

The National Research Centre on Equines, Bikaner Campus, has just launched an ecotourism programme to protect and propagate equines. The Campus is now available to both Indian and foreign visitors. The atmosphere of the campus is a significant draw in and of itself. However, the school has begun Horse Riding, Pony Riding, Tonga Riding, and Buggy Riding in the university’s lush green zones to provide a nature-talking environment on the one hand, and a Desert Point with a traditional hut for the smell of the state, Rajasthan, on the other.

Other notable attractions include the elite Marwari horses, the Pride of Rajasthan; Kathiawari horses, the Elegance of Gujarat; Zanskari horses, the Ponies of Ladakh and Manipuri horses, the Famous Polo Ponies, as well as the French Poitou donkey and White Gujarati donkeys. An Equine Information Centre has been created to display basic technical information on horses. The equine harness and implements are also interesting to observe. The hydrotherapy pool for natural equine treatment is definitely worth seeing. Another lovely feature of the campus is the souvenir stores, which sell handicrafts, leather products, and traditional Rajasthani dried vegetables.

This lake is located on the Bikaner-Jaisalmer Highway, 33 kilometres from Bikaner. This lake is well-known among locals and trail-runners as the most popular picnic location during the monsoon season. The beauty of the lush green catchment region and enough water should be experienced.

The location is located in Raisar village on the Bikaner-Jaipur route, 18 kilometres from Bikaner. This has become the most renowned camping and safari spot, gaining a respectable place among tourists for desert safari, camel safari, camel cart ride, jeep safari, and night camping.

The garden was built on the occasion of Maharaja Ganga Singh Ji in 1937, and it is a replica of the Bukingham Palace Garden in the city of Westminster.

How to Reach Bikaner

Nearest Airport NAAL is 10 kilometres from Bikaner and has direct flights from Delhi and Jaipur.

The bus station is located to the north of the city centre. Agra, Ahmedabad, Ajmer, Barmer, Delhi, Jaipur, Jaisalmer, Jhunjhunu, Jodhpur, Kota, and Udaipur are all served by express buses.

Bikaner is connected by train to a number of Indian cities, including Jaipur, Jaisalmer, Churu, Jodhpur, Delhi, Mumbai, Kolkata, Guwahati, and others.