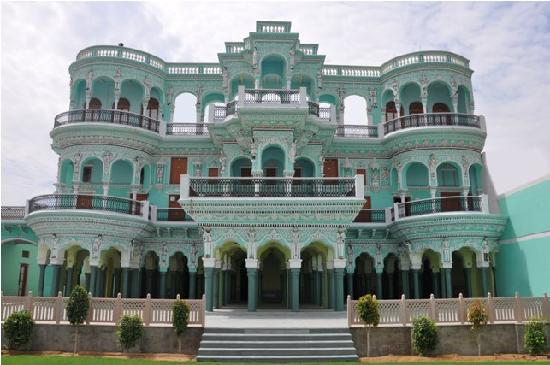 Best Places to Visit in Churu

Salasar Balaji, located in the town of Salasar near Sujangarh, is a temple dedicated to Lord Hanuman. Every year on Chaitra and Ashwin Poornima, fairs are held at the Salasar Balaji temple. Rani Sati temple and Khatu Shyamji temple are also located here. Salasar Balaji is also known by the name of Salasar Dham.

Another tourist attraction in Churu district is a succession of havelis built by Kothari and Surana merchants during their clans’ control in this region. The most notable haveli is the ‘Malji ka Kamra,’ which was built in 1925 AD by Malji Kothari when Churu was a part of Bikaner state. It was created as a guest house at first, but it quickly became a hangout for artists. The Haveli is based on well-known Italian and Shekhawati architectural styles. In this area, there is also the famed Surana brothers’ Double Haveli, which was built in 1870 AD. The Hawa Mahal, which features 1,111 doors and windows, is part of the Double Haveli, as is the Bagla Haveli.

Sethani Ka Johara – Sethani ka Johra (The Wealthy Lady’s Reservoir) was built by Bhagwandas Bagla’s wife. The first Marwari Shekhawati Crorepati was Bhagwandas Bagla. He was a wealthy timber dealer who controlled a number of Saw Mills. Bhagwandasji was born in Churu, Rajasthan. Sethani Ka Johara is located about 3 kilometres west of Ratangarh on the Ratangarh road, and was built as a relief effort during the horrific ‘Chhappania Akal’, or Indian famine of 1899–1900. (vikram samvat 1956) The river draws birds and creatures like the ‘Nilgai’ (blue bull — a huge antelope). According to Churu’s village elders, the water in the Johra has never dried up.

The winter season is the greatest time to visit Churu. Churu is best visited between the months of October and March.

How to Reach Churu

Churu is served by trains from all of the country’s main cities.

Regular buses link Churu to the rest of the country’s major cities.