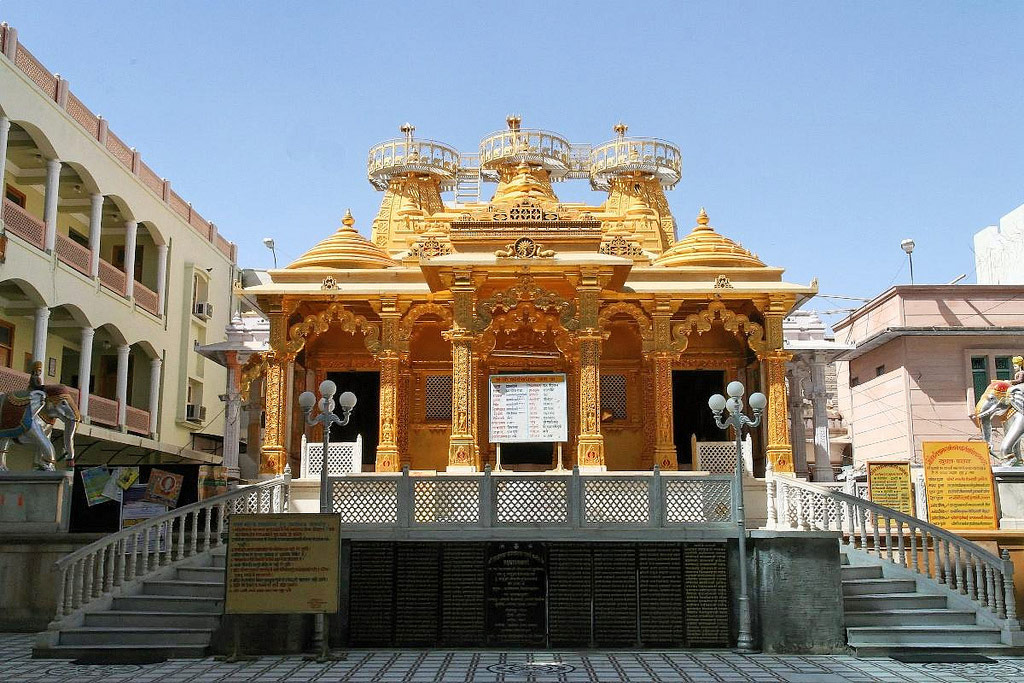 Pali is a city in Rajasthan state of India. It is the administrative headquarters of Pali District and comes in the Marwar region. It is situated on the bank of the river Bandi and is 70 km south east of Jodhpur. It is known as “The Industrial City”. Pali is famous for its sweet named Gulab Halwa made from milk and . Pali is also famous for its Mehendi (henna),which is mainly produced in Sojat city which is 39.5 km (24.5 mi) away from pali) production in India.It is also known as textile hub of Rajasthan. It is also well known for Papad.

Best Places to Visit in Pali

Ranakpur is a village in the Desuri tehsil near Sadri town in Rajasthan’s Pali district in western India. It is about halfway between Jodhpur and Udaipur. It is located in a valley on the western side of the Aravalli Range, 162 kilometres from Jodhpur and 91 kilometres from Udaipur. Falna Railway Station is the closest railway station to Ranakpur. Ranakpur is one of the most well-known tourist destinations in Pali, Rajasthan. Ranakpur can be reached by road from Udaipur.

The building is fully documented in a 1437 CE copper-plate record, temple inscriptions, and a Sanskrit book. Soma-Saubhagya Kavya, inspired by a dream of a celestial vehicle, was begun under the patronage of Rana Kumbha, then ruler of Mewar, by Dhanna Shah, a Porwal. Deepaka was the architect in charge of the project. An inscription on a pillar near the main shrine states that Deepaka, an architect, built the temple in 1439 under the instruction of Dharanka, a devout Jain. When the ground floor was finished, the ceremonies mentioned in Soma-Saubhagya Kavya were overseen by Acharya Soma Sundar Suri of Tapa Gachha. Construction lasted till 1458AD.

The temple was periodically renovated. Some households contributed to the construction of devakulikas and mandaps. Dharanashah’s descendants today primarily reside in Ghanerao. In the last century, the temple has been managed by the Anandji Kalyanji Pedhi foundation.

Ranakpur is well-known for its marble Jain temple, which is regarded to be the most magnificent of the Jain temples. There’s also a modest Sun Temple run by the Udaipur royal family trust.

Falna is a town in the Pali District of Rajasthan, India. It is a vital railway station on the Ahmedabad-Jaipur line. Falna is 75 kilometres from Pali’s district headquarters. Falna is the closest train station to the famed Ranakpur temples. Falna is 35 kilometres away from the temples. The Jain Golden Temple in Falna is a popular tourist destination.

Falna Jain Golden Temple is a temple located in Falna, close to the famous Jain temple Ranakpur. It is a key draw for Pilgrims. Shri Shankeshwar Parshwanath Bhagwan owns the temple. The “Kanch ka Mandir” (Mirror Temple), located beneath the main temple, is also a site of prayer, with the walls covered in miniature mirrors. Even though it is little, it is worth a visit. Apart from the places mentioned above, other places worth visiting in the district include the Ramdeoji temple near village Biratiya in Raipur tehsil, the fort of Desuri, Kurki, the birthplace of the well-known poetess Mirabai on the border of Jaitaran tehsil, Narlai in Desuri tehsil, Deepawas picnic spot in Raipur tehsil, and Jain temples in Sadri

The Society’s headquarters are in the village of Jadan in the district of Pali, Rajasthan. Since 1993, the Society has been working in the fields of health, education, yoga and Vedic culture promotion, rainwater harvesting, and the promotion of peace and understanding across cultures and religions.

The centre structure of this vast complex is designed in the shape of the ancient Sanskrit symbol OM. OM is made up of three letters: A, U, and M. It depicts the primal eternal sound, the cosmic vibration. The fundamental source of creation, adi-anadi – the reality that was, is, and always will be – is OM. As a result, OM denotes wholeness and fulfilment. It is the most beautiful mantra because it includes all three primary characteristics of God: Brahma (the Creator), Vishnu (the Sustainer), and Shiva (the Liberator).

This core monument, which will cover an area of 250 acres, will be the world’s largest man-made representation of OM. The 108 residential chambers that will form this stunning OM shape will gather a significant amount of cosmic energy. These units represent the 108 beads of the Japa Mala. The crescent Moon of the OM symbol will be represented by a lake. Bindu, its highest point, will be built as a 108-foot-tall tower with 12 temples. A massive above water tank will be located at 90 feet, and above it will be a Surya temple devoted to the Lord of the Sun.

Auwa is located 12 kilometres south of the Marwar Jn. tehsil headquarters. Auwa estate was previously a part of Jodhpur State’s Sojat district. The location is minor today, but it gained significance during the 1857 upheaval when its Jagridar Thakur Kushal Singh stood up and revolted against the British. Bagawat was performed by Army Soldiers in Erinpura Chawani on August 25, 1857. These army soldiers arrived at the village of Auwa. Thakur Khushal Singh led them in their quest for independence. Thakurs from Marwar State Ashop, Gular Alaniyawas, Bhimaliya, Redawas, Lambiya, and Thakurs from Mewar State Roopnagar, Lasani, Salumber, and Asind also assisted Auwa Thakur in this effort.

On the 7th of September 1857, under command of General Henari Larenze of Ajmer, they assaulted Anad Singh Kiledar Jodhpur on the 8th of September 1857. Lt. Hechket joined the Anad Singh as well. Soldiers died throughout the conflict, and Auwa won its first fight for independence in 1857. Due to this defeat, General Larenze gathered his troops from Beawar and marched to Auwa on September 18, 1857, to teach Auwa’s freedom fighters a lesson. Captain Masan, a political agent from Jodhpur, arrived in Auwa with a big force to assist General Larenze. Auwa fought a major war for independence against the English forces. Captain Mason was killed in this battle, and his head was hung on the fort’s main gate. As a result of the Second Fight, Auwa’s freedom warrior was also victorious.

Pali’s Somnath temple is well-known for its historical significance and architecture. It is located in the heart of Pali. It was built in the Vikram Samvat 1209 by Gujarat’s King Kumarpal Solanki. It is Lord Shiva’s temple. There are numerous modest temples dedicated to Hindu deities on the property.

The magnificent mediaeval shrine dedicated to the Sun God is located on the banks of the Mavi River, surrounded by the picturesque Aravali hills. The temple, built on a raised platform, is a work of art in architecture. The sanctum and hall are both polygonal, with a running band of solar deities seated on chariots all around the outside wall.

Ghanerao is a settlement in Desuri tehsil, located south-west of Desuri on the road to Sadri. Prior to independence, the position was held by a first-class Jagirdar of the ancient Jodhpur state, and it was his primary responsibility to protect the historic fort of Kumbhalgarh (now in Rajsamand district). There are numerous Hindu and Jain temples in the village and surrounding area. In the hamlet proper, there are roughly eleven Jain temples, some of which are fairly old, in addition to Hindu temples of Laxmi Narainji, Murlidharji, and Charbhujaji. Giriji ki Dhooni Math is located on the outskirts of the village. There is a Gajanand temple here that is worth viewing.

It is located north-west of Desuri on the Rani-Desuri route. Nadol is presently a little village, but it was originally the capital of the Chauhans of the Shakambhari’s collateral line. The old ruins still bear witness to the magnificence that once belonged to this location. On his way to the Somnath temple, Mahmud Ghazni is supposed to have travelled through Nadol. Later, Qutub-Uddin-Aibak, Mohammed Ghori’s lieutenant, took this location.

The community and its surroundings are home to a number of well-known temples. Padma Prabhunath, a gorgeous Jain temple, is located near the major market. On top of a nearby rock, there are temples dedicated to Somnath, Rikheshwar Mahadeo, and Ashapura Mataji. The temple of Hanumanji is located on the bank of a talab near the burial sites and features an exquisitely carved Toran on marble doors. Acharya Mandeosuri, the author of the Laghu Shantimantra, has a Devra in the Neminath temple. A majestic Parasvanath Jain temple, included among the Panch tirthi for the Jain in the district and said to be very old, is located about 9 kilometres from Nadol on the Desuri-Rani route.

There is no mention of the temple’s age, but it is thought to be quite old. The last refurbishment was completed in the Vikram era of 2022, and the idol was erected. The king of Udaipur once paid a pilgrimage here. While preparing to create a pigment mark on the forehead (Tilak), he noticed a moustache hair in the bowl of saffron and remarked to the worshipper in the temple, “It appears that God has moustaches.” And the God-obsessed worshipper replied, “Yes, God can take on numerous shapes as he pleases.” “I shall stay here for three days,” the obstinate king declared. “I’d want to see Mahavir with moustaches.” Mahavir with moustaches appeared to the king, pleased with the committed worshiper’s worship.

As a result, this idol was given the name Muchhala Mahavir. Even now, numerous supernatural occurrences occur here. Every year in the month of Chaitra, a fair is held here. This Tirth is a member of the group of the five Godvar Tirth. Falna, the nearest railway station, is 40 kilometres away.

Every year on Chaitra Sudi Ekam (according to Vikram Samvat), a two-day fair is held. Because this market is held after the Holi holiday, a huge number of Holi dancers in traditional and spectacular costumes come. More than a lakh devotees attend. The most devoted come barefoot from their homes to get the tremendous blessing. They trek barefoot from 15Km to 200Km in groups (Sangh) for 2 to 10 days. There is even a cycle yatri travelling 2500 kilometres from Chennai, Coimbatore, and Hosur (Tamil Nadu to Rajasthan) on a bicycle for a month (30days) Mela is a Hindu festival that takes place every year.

Because Khetlaji is the folk-deity (Lok-devta) of various castes and communities in the Marwar area, many people flock here to praise the God after marriage and childbirth. The Thanksgiving celebration begins just after the deity’s Aarti, which takes place between 8:30 and 9:00 a.m. The goods required for giving thanks are sold at stalls outside the temple. The temple is big and has three aarthis (vishash pooja) for Sri Sonana Khetlaji, which are at 8 a.m., 6.30 p.m., and 12 a.m. It has been observed that visiting this aarthi brings the greatest blessing.

The winter season is the greatest time to visit Pali.

How to Reach Pali

Jodhpur Airport, about an hour and a half drive from Pali, is the nearest domestic airport. Through Air India and Jet Airways, Jodhpur Airport is well connected to a variety of locations including Delhi, Mumbai, and Udaipur.

Pali has its own railway station, Pali Railway Station, which is connected to all of Rajasthan’s main cities. Guwahati, Jaipur, Ajmer, Bangalore, Ranakpur, Yeshwantpur, Bikaner, Jodhpur, and Mysore are all connected.