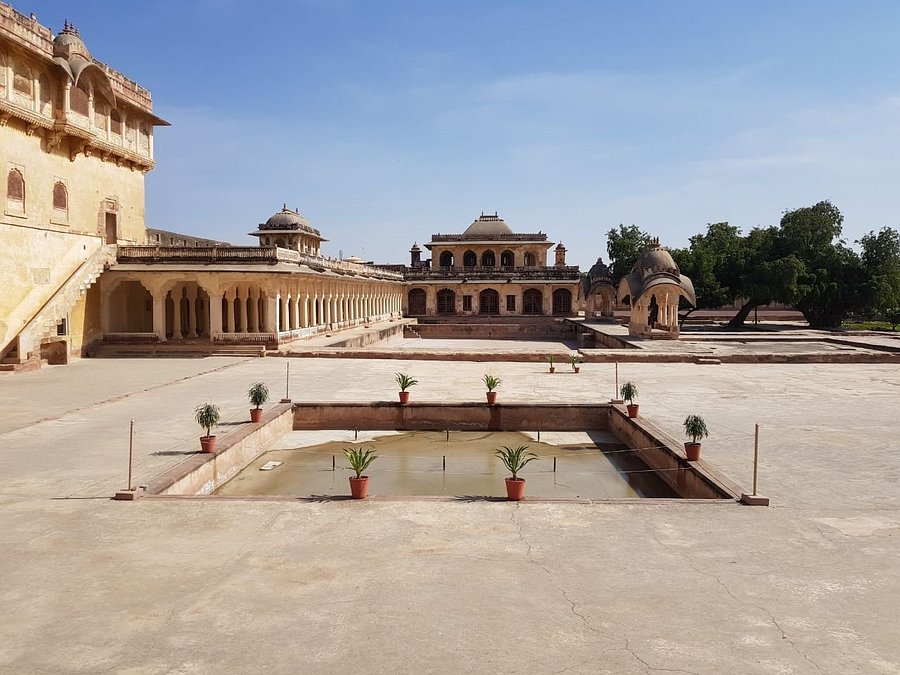 Nagaur is a city in the Indian state of Rajasthan. Nagaur District’s administrative headquarters are located here. Nagaur is about halfway between Jodhpur and Bikaner. Nagaur is well-known for its spices. Nagaur has an abundance of mineral resources.

Best Places to Visit in Nagaur

TARKEEN DARGAH: The most famous after Ajmer Dargah; a spiritual spot for Muslims and Sufis.

JAIN TEMPLE IN GLASS: A lofty glass edifice that serves as a sacred space for the Jain community.

KHINVSAR FORT:- 42 kilometres from Nagaur on National Highway No. 65 towards Jodhpur; 500-year-old fort in the heart of the Thar Desert; converted into a hotel with modern amenities. Mugal Emperor Aurangzeb used to dwell here; Khinvsar town contains 25 tiny shrines; and herds of black deer are a famous tourist attraction

KUCHAMAN FORT:- One of Rajasthan’s oldest and most inaccessible forts; situated on top of a straight hill; unique water harvesting system; Jodhpur rulers used to mint their gold and silver currency here; affords a beautiful view of the city; fort converted into a hotel has a strong tourist attraction.

How to Reach & Where to stay –

25 kilometres from Merta City, it has an interesting storey about how when thieves were found to be under threat of death, they remembered mother by heart, mother appeared for their rescue, a temple was built under obligation, the thieves who escaped vowed never to commit theft again, and mother takes two and a half cups of wine from a true seeker.

How to Reach & Where to stay –

MAKRANA:- A marble treasure trove; exemplifies how stones can be sculpted and used; marble mining is the mainstay of life for the villagers; worth witnessing how stone provides quality to life; this marble was used in the creation of the Taj Mahal, Victoria Memorial, and other white stone buildings.

JAIN VISHVA BHARTI INSTITUTE (deemed University): A prominent Jain centre; a school of philosophy; a centre of spirituality and purification; an Ahinsa society; a treasure of peace; an earthly habitation of mankind.

OTHER PLACES OF ARCHEOLOGICAL INTEREST:

HARSOR is located in Nagaur district’s Degana tehsil. It is around 30 kilometres from Degana.

MERTA ROAD, PHALVARDHIKA (PHALODI): Merta tehsil, Nagaur district, near Merta Road Railway Station. It is an ancient Brahamani Mata temple known as Phalvardhika Mata that dates back to the 10th century or perhaps before. Some say the temple was built during the Pratihara period and is located 11 kilometres from Merta City.

Shatkup was Khatu’s previous name (six wells). When the Shak rulers arrived in India, they brought two new wells with them, which they named Shakandhu (Stepwell) and Kalandh (Rahat). Khatwan was Khatu’s previous name, according to Prathivraj Raso. Old Khatu is almost completely ruined. There are now two villages, one called Bari Khatu and the other Chhoti Khatu. A tiny fort stands on the hills of Chhoti Khatu. Prathviraj Chouhan erected the fort. An antique step well known as Phool Bawadi is found in Chhoti Khatu; it is claimed that this step well was built during the Gurjara Pratihara period. The architectural style of this step well is artistic.

This village is thought to be hundreds of years old. It features a historic fort, a Ganesh temple, a Jain Mandir, and a Ramchandra Gurjar cenotaph that are all worth seeing. Beautiful stone carvings can be found throughout the structure. The village is located on the Gothan-Jodhpur route in Nagaur’s Merta tehsil.

It is roughly 25 kilometres from Nagaur district headquarters in Nagaur tehsil. The village is centuries old, and it is believed that Mundra Maheshwari founded it, hence the name Mundiyad. There is an old Mataji temple here, as well as cenotaphs of Jagirdars and Charans from the mediaeval period. There is also a modest Ganesh shrine that is well-known among the locals.

The town is well-known for its “Pashupati Nath Temple” and “Phulabai Temple.” On the Deh route, it is 20 kilometres from Nagaur district headquarters. Pashupati Nath temple is unique in India and was created in the same archaeological style as Kathmandu, Nepal. Phulabai was a Jat saint who was born in 1938. She was devoted to Lord Rama since childhood and spent the most of her time in “Bhakti” and “Kirtana” of Shri Ram.

This village is located in Nagaur’s Merta Tehsil. Merta City is 15 kilometres away. Here is a well-known Ram Sanehi Peeth. Adi Acharaya Daryavji of the Ram Sanehi Community is said to have performed “tapsaya” here. Every year, on the full moon of Chaitra, a large fair is held.

Kurki is a small settlement in Nagaur’s Merta Tehsil. It is roughly 30 kilometres from Merta and is the birthplace of the great princess and poetess Meera Bai.

It is approximately 30 kilometres north of Nagaur. It is the hometown of the Great Saint Baba Hariram and the poet Kandan Kalpit. Every year in the months of Bhadrapad Chaturthi and Panchmi, a large yearly fair is conducted here, attended by around 1-2 lac people from Rajasthan, Uttar Pradesh, Haryana, Delhi, and Punjab.

It is located on the district’s northwestern boundary and is a popular destination for foreign tourists who want to experience the desert lifestyle. There is a tiny museum in the village where Rajasthani lifestyle items are gathered and displayed. (This hamlet is also well-known for its exquisite “Kathi”-saddles for camels and horses.)

This settlement was named after Lok Devta Gogaji, and it is thought that Gogaji’s Barat-marriage party stayed here. There are over 150 gateways in the village, some of which are particularly magnificent with stone sculptures. The majority of the village’s residents are Oswal Mahajans, and they own magnificent and large havelies. Most of the important Oswal Mahajan families have migrated from here to Kolkata, Chennai, and other major Indian cities, while a few of these families have established in the United States, Dubai, Germany, and Iran for trading purposes.

Peepasar is a small village in the Nagaur Tehsil of Nagaur district. It is the birthplace of the Great Saint Jambhoji, the founder of the Vishnoi community.

Panchla Sidha is a small village in Nagaur district’s Khinvsar Tehsil, 60 kilometres west of Nagaur. It is well-known among the Jasnath community. This is a Holi shrine named Siddha Peeth, which was founded in 1575 by Siddh Saint Boyatji in Vikram Samwat. Shri Jagat Singh, Maharaja of Udaipur, built a citadel. Maharaja Jaswant Singh of Jodhpur donated land to the Peeth for wildlife conservation.

Through spiritual teaching, tantras, and yoga, this Peeth is dedicated to the benefit of the people. This holy peeth organises cultural and religious fairs every year in the months of February, April, and September. The biggest event, which takes place twice a year, is a large “Jagran” and “Agni Nriyta (Fire Dance).” Peeth’s disciples dance barefoot on fire in fire dance. At the moment, the peeth is led by its peethadheesh Siddh Shri Suraj Nath Ji, who is also a good yoga teacher (Guru) and organises yoga camps in various parts of India and overseas.

Butati is a village in Nagaur district that is the birthplace of Saint Shri Chaturdasji. Butati is well-known for its divinity. Every day, paralysis patients from all across India would visit the Butat temple and pray for their recovery. This village is located on National Highway (NH) 89, approximately 31 kilometres from Merta City, approximately 49 kilometres from Nagaur City, and around 110 kilometres from Ajmer. The Shri Chaturdasji Maharaj temple is well-known in Rajasthan and neighbouring Indian states. Many people travelled across states in search of a treatment for paralysis. It is a haven for paraplegic victims.

The best season to visit Rajasthan is from October to March, when the days are sunny and not too humid, and the evenings are cooler. The desert influences kick in full force in April, May, and June when temperatures spike, but this attracts tigers out in search of water, which is fantastic for safaris.

How to Reach Nagaur

Ajmer has a well-developed bus network that connects it to major locations all over the world.