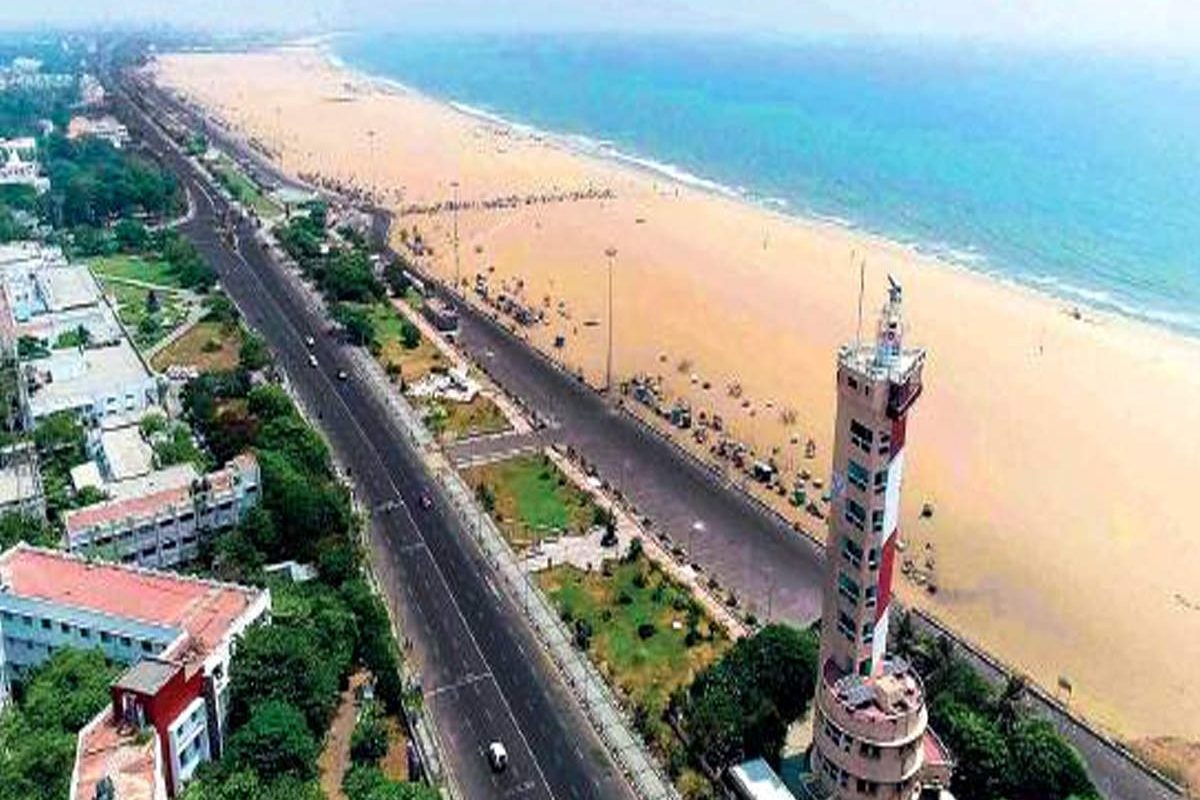 Chennai is the capital of Tamil Nadu, which is located on the Bay of Bengal in eastern India. Fort St. George, which was erected in 1644 and is now a museum, depicts the city’s history as a British military stronghold and East India Company commercial station when it was known as Madras. Kapaleeshwarar Temple, which is decorated with carved and painted gods, and St. Mary’s, a 17th-century Anglican church, are also religious landmarks. Chennai, formerly known as Madras, is the largest cultural and commercial centre in the southern United States. Several Hindu temples, churches, and museums may be found in the city. Chennai offers it everything for visitors, from its white-sand beaches to its delectable cuisine.

Best Places to Visit in Chennai

Marina Beach in Chennai, on the Bay of Bengal, is India’s and the world’s second-longest beach. This mostly sandy stretch of about 12 kilometres runs from Beasant Nagar in the south to Fort St. George in the north. Governor Mountstuart Elphinstone Grant Duff restored Chennai Marina Beach in the 1880s. Every visitor who visits Chennai must pay a visit to this magnificent Chennai beach. Buses, taxis, and two and three wheelers make it easy to get to Marina Beach.

In the early morning and late evening hours, Marina Beach is bustling with activity. Walking around beaches at sunrise and sunset is a memorable experience for everyone. This beach transforms into a fairground in the evening, with various stalls offering antiquities, handcrafted showpieces, ethnic jewellery, and culinary items. Children go about and play games. Because the undercurrent is strong, going into the sea should be done under expert supervision. On this beach, kite flying and pony riding are popular sports.

Triumph of Labour at Marina Beach

The primary attractions on the Marina beach are the aquarium and the Ice House. On the seaside road, historical structures include the Chepauk Palace, Senate House, PWD office, Presidency College, and the Chennai University. On the Marina shore, there are two significant statues: The Victory of Labor and Mahatma Gandhi. Swami Sivananda, Avaaiyar, Thanthai Periyar, Tiruvalluvar, Dr. Annie Beasant, G.U. Pope, Sir Thomas Munro, Subramaniya Bharathiyar, Kamarajar, Robert Caldwell, Kannagi, Kamarajar, M.G. Ramachandran, and Shivaji Ganesan are among the numerous monuments that line this Chennai coastline.

The Government Museum of Chennai, often known as the Madras Museum, was founded in 1851. This museum is a gem in and of itself, being India’s second oldest museum (after the Indian Museum in Kolkata). The Madras Museum, being a rich treasury of outstanding works of art, archaeology, anthropology, numismatics, and much more, is certain to entice everybody.

The Government Museum, which spans 16.25 acres of land, is also one of South Asia’s largest museums. Its complex consists of six separate buildings with a total of 46 galleries. They are as follows:

The main structure has relics and sculptures from the past, as well as animal galleries, botanical galleries, and a philately exhibit. The front structure houses a fascinating puppet exhibit as well as galleries dedicated to preserving folk art and music.

In addition to the bronze objects, there are numismatics and chemical conservation galleries. The Children’s Museum, with its doll area, technology and science displays, captivates all children.

Contemporary Art Gallery – From rock and cave art to British portraiture and modern art, visitors may discover how the art of ‘art’ has changed over time.

The Government Museum is home to an art gallery, a museum theatre, the Connemara Public Library, and the Department of Natural History. Geology, Anthropology, Numismatics, Botany, Zoology, Archeology, And Sculpture Are Among The Sections Of The Government Museum. Exquisite Carvings, A Good Collection Of Arms, Armour, A Collection Of South Indian Musical Instruments, Jewelry, And Exhibits From The Stone And Iron Ages To Look Out For

Some of the most expensive collections of the Government Museum in Chennai include the bronze of Ardhanariswara, an incarnation of Lord Shiva, relics from the 2nd century Ad Amravati Buddhist site, and prehistoric South India.

Government Museum Is Open For Public On All The Days From 9:30am To 5pm.

The Fort is a fortification with 6 metre (20 ft) high walls that resisted a series of 18th-century attacks. It was temporarily in French hands from 1746 to 1749, but was returned to the United Kingdom following the Treaty of Aix-la-Chapelle, which ended the War of the Austrian Succession. The Fort is currently one of the administrative offices for Tamil Nadu’s legislative assembly, and it still holds a garrison of troops on their way to other areas in South India and the Andamans. The Fort Museum houses various Raj antiques, including portraits of several of Madras’ Governors. The Archaeological Survey of India maintains and administers the fort as a ticketed monument.

This church is India’s oldest Anglican church. It was erected under the orders of the then-Agent of Madras, Streynsham Master, between 1678 and 1680.  Its graveyard has the earliest English or British tombstones in India. The nuptials of Robert Clive and Governor Elihu Yale, who subsequently became the first donor of Yale University in the United States, were celebrated in this old prayer chapel.

Many objects from the period of English and subsequent British control are on display at the Fort Museum. This structure was erected in 1795 and originally housed the Madras Bank’s office. The upstairs hall was known as the Public Exchange Hall, and it was used for public meetings, lottery drawings, and occasional entertainment. These artefacts are vestiges of British dominance in India. Weapons, coins, medals, uniforms, and other artefacts from England, Scotland, France, and India going back to the colonial period are on show in the museum. Clive and Cornwallis’ original letters are amazing to read. A collection of charming vintage uniforms is also on show. The pièce de résistance, however, is a colossal statue of Lord Cornwallis.

Pingali Venkayya created the Indian National Flag, which was accepted in its current shape during a meeting of the Constituent Assembly on 22 July 1947, only a few days before India’s independence from the British on 15 August 1947. The museum’s third level has the first ever flown flag following independence. The general public is permitted to see but not to touch or photograph. The museum is described in Nobel winner Orhan Pamuk’s novel The Museum of Innocence.

The Banqueting Hall on the first level of the structure houses paintings of the Governor of the Fort and other important officers of the Regime. The museum’s ramparts are adorned with Tipu Sultan canons. The 14.5-foot-tall figure stands outside the museum’s entrance, near a stairwell. Charles Bank built this statue in England with the purpose of transporting it to India. The pedestal of the monument is sculpted with a scenario representing Tipu Sultan’s messenger giving over Tipu’s two sons as hostages in exchange for a ransom he could not pay to the British. It is named after Richard Wellesley, the brother of the Duke of Wellington and the Governor General of India.

The fort’s flagstaff is one of the highest in the country. It stands 150 feet (46 metres) tall and is made of teakwood.

Namakkal Kavingyar Maaligai is a 10-story structure on campus that serves as the state secretariat’s command centre. It contains the secretaries’ and departments’ offices. The building was refurbished at a cost of 28 crore between 2012 and 2014, with extra features such as centralised air-conditioning and a new electrical wiring system. The Department of Defence has just taken over administration of the whole facility. The fort is a three-story structure that houses the offices of the chief minister and other ministers, the chief secretary, the home ministry, the treasury, and so on. The remaining offices are housed in the Namakkal Kavingyar Maaligai, a 10-story structure that accommodates more than 30 departments.

Until March 2010, the Fort St George complex hosted the administrative offices of the Tamil Nadu government. The fort housed the Tamil Nadu Legislature and the secretariat (along with the offices of different government agencies). The fort itself was available to the public, although only in a limited area. The main structure, known as the secretariat, was solely accessible to government officials and the police. The guns and moat that once defended this historic structure have been preserved. The legislature and secretariat relocated to a new location in 2010, and the previous assembly facility was turned into a library for the Central Institute of Classical Tamil. Following the 2011 assembly elections and the reappointment of J Jayalalithaa as Chief Minister of the State, the Tamil Nadu Assembly and Secretariat were relocated to Fort St. George.

Except for Fridays and national holidays, Valluvar Kottam is open to the public every day. Timigs are open from 8 a.m. to 6 p.m. The Life-size Statue of Thiruvalluvar Is Enchanting With Its Pure Expressions. This statue is a replica of Thiruvarur’s famous temple chariot. So, you should go to Valluvar Kottam, which is a popular tourist attraction in Chennai during Chennai tours.

Best Time to Visit in Chennai

The ideal months to visit the refuge for bird viewing are September through March.

How to Reach Chennai

The Chennai International Airport is 7 kilometres from the city centre.

The Chennai Mofussil Bus Terminal (CMBT) is one of Asia’s largest bus stations, with connections to all of Tamil Nadu’s main cities.