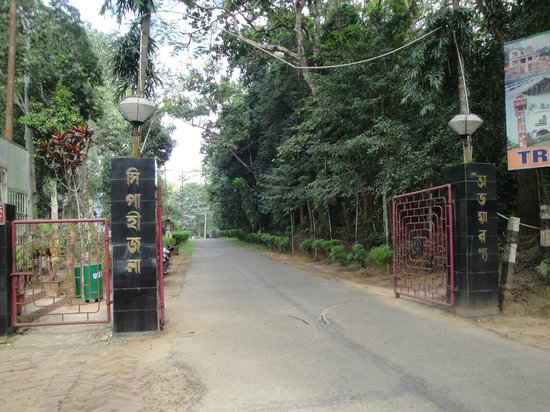 Sepahijala District is a district in the Indian state of Tripura. This district was founded in January 2012, when Tripura added four additional districts, bringing the total number of districts in the state to eight. A portion of the district was created from the previous West Tripura district.

Best Places to Visit in Sipahijala

Neermahal () (literally “Water Palace”) is a former royal palace in the midst of Lake Rudrasagar, India, erected by King Bir Bikram Kishore Manikya Bahadur of the erstwhile Kingdom of Tripura in 1930 and finished in 1938. It is located near Melaghar, 53 kilometres from Agartala, Tripura’s capital. The palace, which is located in the centre of Rudrasagar Lake, combines Hindu and Muslim architectural traditions. The palace is India’s largest and only one of its sort in Eastern India. Only two water palaces exist in India, the other being the Jal Mahal in Rajasthan.

Neer-Mahal, often known as Tripura’s “water palace,” was built as a vacation retreat. It was Maharaja Bir Bikram Manikya Bahadur’s idea to create a palace in the picturesque Rudrasagar lake, and in 1921 he commissioned the British firm Martin and Burns to do it. It took the company nine years to finish the task. Maharaja Bir Bikram Manikya Bahadur belonged to the ‘Manikya Dynasty,’ which is said to be the world’s second from a single line. The palace is the manifestation of Maharaja’s exquisite taste and his intriguing concept of merging Hindu and Muslim traditions and civilizations.

The palace is split into two halves. Andar Mahal is the name given to the palace’s western flank. It was designed specifically for the royal family. The eastern side is an open-air theatre where Maharajas and their royal families can enjoy drama, theatre, dance, and other cultural events. The palace contains a total of 24 rooms. Inside, there are two stairways that go down to a landing on the water of Rudrasagar Lake. Maharajas used to take a hand-powered boat from ‘Rajghat’ to the palace.

Sepahijala Wildlife Sanctuary is a wildlife sanctuary in Tripura, India, measuring 18.53 square kilometres (7.15 square miles) and located in Bishalgarh, about 25 kilometres (16 miles) from the city centre. It’s a wooded area with a man-made lake and natural botanical and zoological gardens. It’s well-known for its clouded leopard enclosures. The sanctuary is home to a wide range of birds, monkeys, and other species. Except for the two steamy summer months of March and April, the terrain is green all year and the weather is mild. It is home to approximately 150 bird species as well as the rare bespectacled monkey, Phayre’s langur. There are four species in the primate area (rhesus macaque, pig-tailed macaque, capped langur and spectacled langur). The crab-eating mongoose, which was last seen in the 1930s, has been resurrected.

The refuge has been designed as both a wildlife sanctuary and an academic and research facility. The sanctuary is home to over 150 bird species, with migratory birds visiting during the winter. The sanctuary, which opened in 1972, is divided into five sections: carnivores, monkeys, ungulates, reptiles, and an aviary. There are various lakes, one of which is named Lake Amrit Sagar and has boating facilities.

Maharaja DhanyaManikya erected the Kamalasagar Kali Temple on a hilltop in the late 15th century. It is located near the Bangladesh border, and the lake in front of it adds to its attractiveness.

The vast ‘Kamala Sagar’ lake, built by King DhanyaManikya (1490-1520), and the two wavy blue water lakes in front of the ‘Ujjayanta palace,’ residence of Tripura’s erstwhile royal kings in the heart of capital Agartala, would constitute an unavoidable itinerary for waterscape enthusiasts. Udaipur, Princely Tripura’s former capital and current seat of the south Tripura District, is also known as a ‘lake-town’ due to the abundance of big lakes dug by several princely kings that dot the town. These lakes, along with the river Gomati that passes through Udaipur, will entice visitors to spend a delightful day there.

Best Time to Visit in Sipahijala

The ideal months to visit Sepahijala Tripura are from October to February.

How to reach DHQ : Bishramganj-

The nearest airport is Agartala Airport, which is located 40.6 kilometres away.

The closest railhead is at Agartala, which is 27.3 kilometres away from the Agartala Railway Station.

From Agartala Bus Stand to Bishramganj, buses and small cars are available (33 kms).