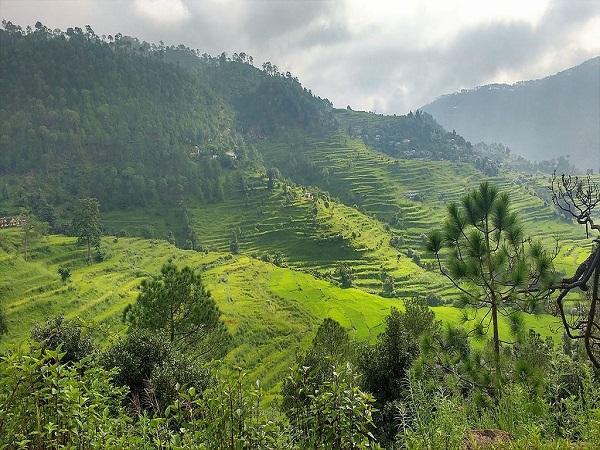 Bageshwar is a town and a municipal board in Uttarakhand, India’s Bageshwar district. It is 470 kilometres from New Delhi, the national capital, and 332 kilometres from Dehradun, the state capital. The picturesque landscape, glaciers, rivers, and temples of Bageshwar are well-known.

The sacred city of Bageshwar, located at the confluence of the rivers Saryu, Gomti, and dormant Bhagirathi, is also venerated as the pious region linked with Lord Sadashiva, the redeemer of all sins. According to the puranas, this is unquestionably a location capable of freeing one from the endless bonds of births and deaths. With the Bhileswar and Nileshwar mountains to the east and west, and Suraj Kund in the north and Agni Kund in the south, Lord Shankar’s homeland is rich in religious, historical, and political importance.

This scenic location, located 25 kilometres from Bageshwar, is a must-see for environment lovers. Kanda is extremely close to an ancient Bhadrakali temple. Kanda, a picturesque hill station and the home of peace (Shantinikitan), is located at an elevation of 1500-1900 metres above sea level. It captivates the senses and imaginations of both locals and visitors, as it is surrounded by stunning mountains and terraced farms. Both locals and visitors love the beauty of the area and benefit from the clean air and healthy environment that mountain scenery provides. There was formerly a local caste called Kanyal, according to traditions and older residents. This caste is commemorated with the name Kanda. Kanda’s hills are particularly appealing to foreign visitors, and are frequently compared to the Swiss Alps.

Since 1988, travellers of many nations have come to stay as volunteers at the centre for paying guests and ecotourism. Visitors to Sonargaon observe, participate in, and enjoy communal life during their stay, which might range from a few days to several months. They also obtain a thorough grasp and knowledge of Kumoani culture and way of life, as well as deep spiritual and religious beliefs, and so have a one-of-a-kind and pleasurable experience. Visitors can learn about local cuisine preparation techniques, which include the use of unique spices and organic vegetables grown locally. Trying the local cuisine can be one of the delights of living in Kanda.

Visitors enjoy the breathtaking natural surroundings in their spare time. The lovely aroma of native flowers, the deep chattering of gorgeous birds, and the colourful butterflies make life here extremely peaceful. This experience can empower visitors with fresh personal strength, and the quiet and calm can provide an opportunity for the tensions and responsibilities of life to crumble away and give peace of mind with the deep effect of this cerebral meditation. Many people take advantage of the tranquil ambiance by practising yoga.

Kausani, at 1890 metres above sea level, is nature’s own sanctuary of seclusion and greenery. Even Mahatama Gandhi, the father of the nation, has reflected on the grandeur of this place. Several snow-capped peaks lie in a dignified row almost 300 kilometres long, gleaming against the azure sky, giving the horizon as seen from Kausani an enviable sight. The majesty of the snow-capped Himalayan range is at its peak when the sun’s rays colour them scarlet and gold. Mahatama Gandhi, who spent 12 days at Kausani in 1929, was inspired by the panoramic majesty of this abundantly bestowed location to produce his remarkable commentary on the Geeta-Ana-Sakti yoga.

The Mahatama’s guest home is currently known as Anasakti Ashram. Sumitranandan Pant, a Hindi poet laureate, was born in Kausani. Some of his early poetry written here described nature in all of its guises. There is a modest museum to commemorate that hallowed site. Kausani is suitable for individuals who want to spend a tranquil holiday in the lap of nature, away from the clamour and dust, rush and bustle of big towns. Indeed, Kausani is a true paradise of beauty, and a visit there is a must for anybody visiting Kumaun. As you wake up to see the Kausani sunrise, the huge expanse of the famous Katyur Valley is in front of you.

The small but old settlement of Baijnath is located in the Katyuri valley, 19 kilometres from Kausani and 26 kilometres from Bageshwar. It was once the capital of the Katyuri dynasty of monarchs, and the city was known as Kartikyapura. Baijnath is a remote antiquity and historical significance in the Kumaun sociocultural region. The remains of those wonderful days can be found on the banks of the Gomti river in the form of a cluster of temples. The temple is well-known for its exquisite stone image of the Hindu goddess Parvati. The famous Kotkimai temple is located around 8 kilometres from Baijnath on the Gwaldam road. Pandusthal, which is nearby, can also be visited.

Another significant temple, the Sriharu temple, is located around 5 kilometres from Bageshwer. Devotees say that prayers for desire fulfilment never go unanswered here. Every year, on the VijyaDashmi day following the Navratras, a major fair is held.

This is located 8 kilometres from Bageshwer. A big cave spanning 20 X 95 sqmts is located here, which holds Lord Shiva’s idols.

A magnificent temple dedicated to Goddess Chandika is around a half-ailometre away from Bageshwar. Every year, the temple is a hive of activity as devotees gather to give pujas to the god during the Navratr festival.

Best Time to Visit in Bageshwar

Still, the winter season, between September and February, is considered the finest time to visit Bageshwar. The region is enchanting during this time of year, when the neighbouring mountains and lush pastures are obscured by a heavy blanket of snow.

How to Reach Bageshwar

Bageshwar is well linked by road and is a short distance from India’s major cities.

Kathgodam is the closest railway station.

Pantnagar Airport is the closest airport.