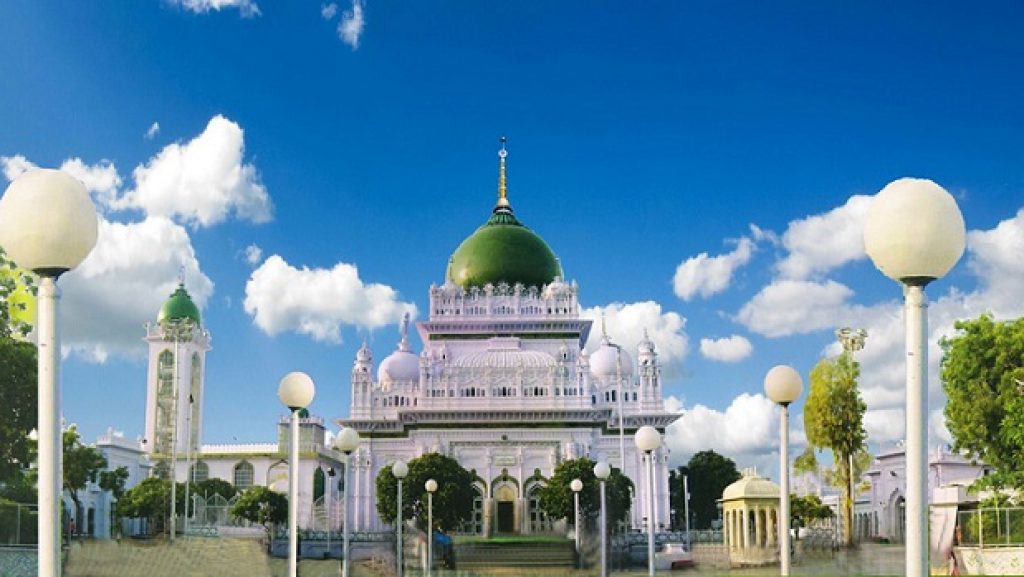 In the state Uttar Pradesh state in India, Barabanki is a town and administrative headquarters in the District of Barabanki. The town of Lucknow (the State capital) lies around 30 km east of the town. Sufi St Waris Ali Shah is the heart of the town at Deva Sharif

Best Places to Visit in Barabanki

The pilgrim town of Dewa is situated just 42 Kms. from Lucknow and 12 Kms. from the district headquarters of Barabanki in the heart of erstwhile ‘Awadh’. This is the birth place of Haji Waris Ali Shah who was to influence the lives of many generations of people with his message of universal love for humanity. Haji Waris Ali Shah came of a family of HusainiSyeds, and was born in the first quarter of the 19th century. His father Syed Qurban Ali Shah died in his early childhood. Hindus held him in high esteem and regarded him as a perfect Sufi and a follower of Vedanta. Haji Saheb left for his heavenly abode on 7th April, 1905. He was buried at the spot where he died and this place is marked by a splendid monument erected in his memory by some of his devoted followers, both Hindus and Muslims. Every year Urs is held at the scared tomb in the month of ‘Safar’ (July). Haji Waris Ali Shah organized ‘Urs’ of his father in the month of Kartik (October-November) where a big fair known by the name ‘Dewa Mela ‘ is held to commemorate the Saints. Pilgrims from all parts of the country and abroad come to pay their homage to the great Sufi Saints, Haji Waris Ali Shah and his father Qurban Ali Shah. A big cattle market is the highlight of the Fair. A good variety of cultural programmes are organized during the Fair including an All India Mushaira, Kavi Sammelan, Music Conference, Manas Sammelan, Seeratun Nabi etc. Sports loving people find great pleasure in events like Hockey, Volleyball, Badminton, Athletics, etc. Hundreds of brightly lit and decorated shops offer a variety of handicrafts, household utility items, toys, delicious snacks and exotic sweetmeats. A brilliant display of Fireworks marks the conclusion of the 10 days Fair.

Bam-bhole, bam-bam-bhole resounding with the devotees moving in groups with Kanwar on their shoulders is famous for Lord Shiva’s Lodheshwar temple where the wishes of the devotees are being fulfilled since time immemorial and continues to be so even today. Even today, the people flock in lakhs to this place in the month of Phalgun every year i.e. on the occasion of Mahashivratri to worship and offer water to the famous shivling. This ancient Shiv temple is situated at village Mahadeva in tehsil Ram Nagar of district Barabanki on the banks of Ghaghra. Lodheshwar Mahadev has ancient history to its credit. The Shivling in this temple being one of the exotic and rarest of the 52 shivlings on the surface of earth.

It is said that, prior to the Mahabharat period, Lord Shiv wished to reappear  on the earth once again. Pandit Lodheram Awasthi was a learned Brahmin, simple, kind and good natured villager. One night Lord Shiv appeared in his dreams. Next day, Lodheram who was childless, while irrigating  his field, saw a pit from where his water was getting drained into the earth. He tried hard to plug it, but failed and returned home. In the night, again he saw the same statue in his dreams, and heard whispers saying ‘The pit where water is getting drained is my place establish me there and I would get fame by your name.’ It is said that, next day when Lodheram was digging the said pit, his implement struck a hard substance, and he saw the same statue in front of him, blood was oozing from the place where his implement had hit the statue, this mark can be seen even today. Lodheram was terrified by this sight, but he continued to digout the statue, but failed to get to the other end of the statue, so he left it as it is, and built the temple at the same place with half his name ‘Lodhe’ and  the  Lord  Shiv’s   ‘Ishwar’,  thereby  became  famous  by  the  devotees   name i.e. Lodheshwar. The Brahmin was then blessed with four sons, Mahadeva, Lodhaura, Gobarha and Rajnapur, villages named after them exist even today.

There are several instances in Mahabharat where this ancient temple is referred to. Pandav after the Mahabharat had performed the Mahayagya at this place, a well exists even today by the name Pandav-Kup. It is said that the water of the well is having spiritual qualities and those who drink this water get cured of a number of ailments.
In the history of the melas and fairs the world over, the fair held on the occasion of Mahashivratri at Mahadeva is unique. For the millions of devotees thronging the place, there is not a single woman devotee to be found during this festival fair.

Village Kintur, about 38 Kms. east of district headquarters  Barabanki was named after Kunti, mother of the Pandav. There are a number ancient temples and their remains around this place. Nearby a temple established by Kunti, is a special tree called Parijaat. There are a number of sayings about this tree, which have popular acceptance. One being, Arjun brought this tree from heavens and Kunti used to offer and crown Shivji with its flowers. The other saying being, that Lord Krishna brought this tree for his beloved queen Satyabhama. Historically, though these saying may have some bearing or not, but it is true that this tree is from a very ancient background. The following is said in the  Harivansh Puraan about Parijaat. Parijaat is a type of Kalpvraksh, it is said to be found only in the heavens and, whosoever makes a wish under  this tree, gets fulfilled. In the Religious and ancient literature, we find a number of references to the Kalpvraksh, but no description whatsoever of its existence can be found anywhere in the world,   except  for only  Kintur (Barabanki ). Whereby this unique  Parijaat tree of Kintur holds a special place in the world. In botanical  terms, PARIJAAT is known as Adansonia digitata and has been kept in a special category, because it does not produce either   its fruit or  its seeds, neither can its branch cuttings can be planted to reproduce a second Parijaat  tree. This is a unisex male tree, the botanist say, that  there is no such tree anywhere else to be found.

The leaves of this tree in the lower portion has five tips like the fingers of a hand, while at the upper reaches it has seven. Its flower is very beautiful and white in colour, on drying out it takes on golden tinge. This flower has five petals. This tree blossoms very occasionally, with very few flower, but when it does,  that is after the ‘Ganga Dashehra’, spreads its fragrance far and wide. The age of this tree is said to be 1000 to 5000 years. The perimeter of  the trunk of this tree is around 50 feet and height of around 45 feet. There is another popular saying that, its branches do not break or dryout but shrink and disappear into the original trunk. The nearby people consider it to be their protector and obliging, henceforth they protect its leaves and flowers at all costs. Local people hold it in high esteem, in addition to the large number of tourists who visit to see this unique tree.

It is ornamented with the famous Siddheshwar Mahadev temple, and each year on the occasion of Shivratri, a large Fair is held here in the months of December and January.

People came to pay their respects to Sufi Saint Qazi Qutub, whose mausoleum lies nearby. On the occasion of Id-ul-Fitr and Id-uz-Zuha, a large fair is held here.

Badosarai, located approximately 9 kilometres northeast of the Ram Nagar tehsil headquarters, was founded roughly 550 years ago by a spiritual King. The temple of Baba Jagjivan Das, the founder of the ‘Satnaami’ sect, in Kotwa, widely known as Kotwa Dham, is about 6 kilometres southeast of this location, and it is surrounded by a beautiful pond. During the Fairs in October and April, thousands of pilgrims take holy dips in this pond.

Kintur, about two to three miles east of Badosarai, is named after Kunti, Pandav’s mother, according to legend. It was once known as Kuntapur. It is well-known for the Kunteshwar Temple, which attracts a large number of visitors.

Its original name was Saptrishi, according to legend, since Guru Vashisht, Kulguru of the Suryavanshi rulers, preached and taught the young princes here. It serves as a penance site for a large number of Saints and ascetics. There are no authenticated evidences accessible to provide any authentic details regarding this location previous to Muslim domination. This was the headquarters of Sayyed Salar Masood, the brother of Ghazni’s Mehmood. His father Salar Shah’s grave is located here, and people come to pay their respects. The main assemblage is held during the summer full moon of ‘Jaishtha.’ Sheikh Salahuddin had also accompanied Salar Shah and had settled in Satrikh.

Bhitauli is located on the banks of the Soti River and was the final battleground for the freedom fighters during the First War of Indian Independence in 1857-1858. Raja Guru Bux Singh and his soldiers fought heroically against the British here. Because this location has a fort and other remnants of the freedom struggle, it has been designated as a protected historical heritage site.

This is the birthplace of India’s famous freedom warrior, politician, and statesman, Late Shri Rafi Ahmad Kidwai. After leaving for his heavenly dwelling, he was buried in Masauli, and a tomb was built in his honour. Masauli is the legendary Kidwais’ residence.

Best Time to Visit in Barabanki

From November through March is the greatest time to come. During the remaining months, the temperature can reach dangerously high levels.

How to Reach Barabanki

The Chaudhary Charan Singh International Airport in Lucknow is about 45 Kms from Barabanki.

The railways connect all Metro cities and the bulk of the State capitals of this nation with Barabanki come under the North-Eastern Railway Division. It therefore plays a key transit point east and northeast of India. The train station at Barabanki is 28 kilometres from Lucknow.

Town Bus Stands offer Mofussal Routes and Local Routes. Since three NH pass, the availability of transit and connectivity to any major city or city in the state and neighbouring countries is unfailing. The city bus stop provides access by UPSRTC and its Undertaking Busses to all the minor cities and large district villages.