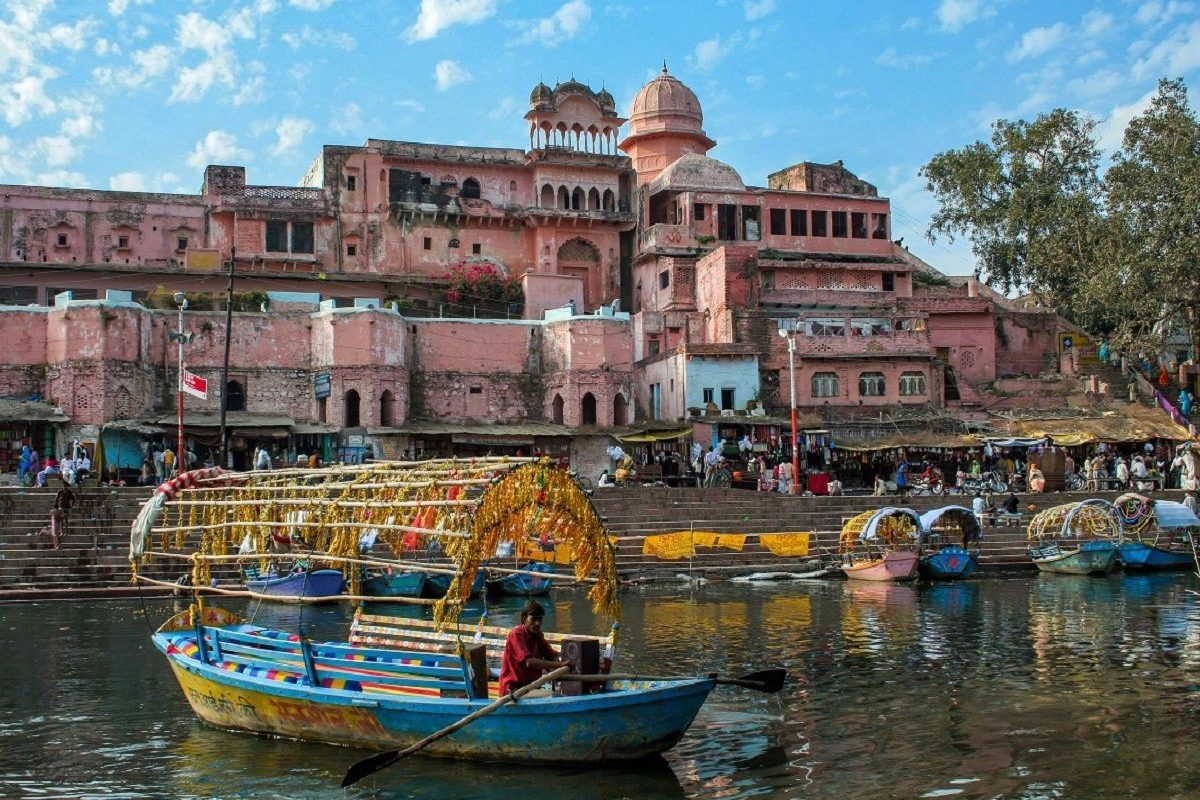 The district of Chitrakoot is one of the Uttar Pradesh provinces of India in the area of Bundelkhand and the district headquarters of the town is Chitrakoot.

Best Places to Visit in Chitrakoot

Atri Muni, his wife Anasuya, and their three sons sat in silence to meditate. Here is an ashram named after Anasuya. The Mandakini river is thought to have formed as a result of Anasuya’s meditation.

This is a small stream that pours into tanks at the end of an underground cave. The source of this rivulet is yet unknown. Because of two natural throne-line rocks in the cave, it is believed that Lord Rama and his brother Laxman conducted court here.

Gupt Godavari is 18 kilometres from Chitrakoot. According to legend, Lord Rama and Lakshman spent parts of their exile here. Gupt Godavari is a two-cave system hidden within a mountain with knee-high water levels. The larger cave contains two stone-carved thrones thought to belong to Rama and Laxman. The outsides of these caves are lined with shops selling memorabilia.

This ashram is famous for being the final resting place of the sage Atri. Atri and his pious wife Anusuya meditated here. According to legend, Lord Rama and Mother Sita visited Sati Anusuya at this ashram during their exile. During this time, Sati Anusuya used to teach Mother Sita. A big statue depicting a Mahabharata scenario depicts Lord Krishna riding a chariot with Arjun sitting behind him. More sculptures with interesting artwork are maintained inside for religious darshan.

The Ram Darshan temple is a one-of-a-kind temple where puja (worship) and offerings are forbidden. This temple assists people in becoming holistic Humanists by teaching them essential moral values. The temple is a blend of cultural and human features that leaves an indelible imprint on everybody who visits it. The temple sheds light on Lord Rama’s life and interpersonal relationships. To enter the premises, an entry ticket is required.

The sphatikshila is a tiny boulder on the Mandakini River, upstream from the Rama Ghat. This is thought to be the location where Mother Sita performed her Shringaar (makeup). In addition, legend has it that Jayant, Lord Indra’s son, pecked Sita on the foot here while dressed as a crow. This boulder is reported to still bear the impression of Rama’s feet.

About 5 kilometres from the railway station. Ganeshbagh is located on the Karvi-Devangana road, near BankeySiddhapur village, and contains a finely carved temple, a seven-story baoli, and the remnants of a residential palace. Peshwa Vinayak Rao erected the compound as a summer retreat and it is commonly referred to as a mini-Khajuraho.

The trek to Chitrakoot is incomplete without a visit to this holy destination of prayer if one want to earn salvation. To crown Lord Rama as ruler of Ayodhya, it is reported that his brother Bharat gathered the waters of all sacred rivers to anoint him with. The waters were then emptied into a deep well known as Bharat Koop on the advise of Sage Atri. There is also a temple dedicated to Lord Rama here.

Bharat Koop is a massive well near Bharatpur village, some 20 kilometres west of Chitrakoot. Lord Rama’s brother Bharat is said to have brought water from all the sacred locations to honour Lord Ram as the King of Ayodhya. Bharat was unable to persuade Lord Ram to return to his country and appoint him as king. According to Maharishi Atri’s directions, Bharat then poured holy water into this well. It is stated that bathing in this well’s water signifies bathing in all teerths (pilgrimage destination). A temple dedicated to Lord Rama and his family can also be found here.

About 8 kilometres up the Payaswani’s left bank. It is inextricably linked to the sacred hills of Kamtanath, which are 2 kilometres to the south – west of Karvi. Pilgrims first bathe in Sitapur’s payaswani before proceeding to the Parikrama of Kamtanath hill. It was once known as Jaisinghpur until being given to Mahant Charandas by Aman Singh Raja of Panna, who renamed it Sitapur in honour of maa Sita. Along the river, there are twenty-four Ghats and various temples that add to the splendour of the town.

88 kilometres The impregnable Fort of Kalinjar may be reached from Chitrakoot. It once had the Nilkanth temple, Swarga Rohan Kund, Vakhandeshwar Mahadev Temple, Shivasari Ganga, and Koti Tirth, all of which were sought by kings and dynasties. Sita Sej, Patal Ganga, Pandu Kund, Budhi-Tall, Bhairon Ki Jharia, and Mrigdhara are some of the other important places in the fort vicinity.

ChitrakootDham’s primary holy spot is Kamadgiri. The Sanskrit name ‘Kamadgiri’ means “mountain that grants all wants and desires.” During their exile, Lord Ram, Sita, and Laxman are said to have lived here. Lord Kamtanath, another of His names, is the Ishta Deva main god not only of KamadgiriParvat, but of Chitrakoot as a whole. The devout believe that all sacred spots (teerthas) are included in the Parikrama or pilgrimage-path. The pilgrimage route around this peak is approximately 5 kilometres long. The Parikrama Path is densely packed with temples. Except for the seasons, the area is green all year and resembles a bow when viewed from anywhere in Chitrakoot.

Dharkundi is located in Chitrakoot, around fifty kilometres heavenly space between trees. In the Mahabharata, Yudhisthira Dharmaraja Agmrshn furrows here to answer questions from the Chairman of the local community about Bhima’s marriage to Princess Hidinba. Bathing and drinking in sulphur spring water, as well as other herbs blended with sulphur, is thought to be the cure for skin problems.

This is thought to be the original Chitrakoot, a forested peak of great religious significance. The Bharat Milap Temple can be found here. Pilgrims circumambulate the hill in order to seek blessings.

Stepped borders leading into the Mandakini River and a tranquil setting can be found here. This riverbank is where Lord Rama, Goddess Sita, and Lord Laxman engaged with Saint Goswami Tulsidas. Ram Ghat, as one of Chitrakoot’s main Ghats, is a hive of activity and a teeming populace. Early in the morning, evidence of it can be seen. The colourful boats lining the steps leading into the river further add to the scene. The evening Aarti on the Ram Ghat is not to be missed.

The Bharat Milap temple is thought to symbolise the location where Bharat met Lord Rama during his exile in order to encourage him to return to the throne of Ayodhya. The reunion of four brothers is reported to have been so powerful that the rocks and mountains of Chitrakoot melted. Footprints of Lord Rama and his siblings can still be visible on these rocks.

Ganesh Bagh lies on the Karvi-Devangana road. Vinayak Raj Peshwa erected it in the nineteenth century. This location consists of a temple with inside sculptures matching Khajuraho art and style. Because of its architectural resemblance to the actual Khajuraho, this location is also known as little Khajuraho.

This Hanuman temple is built on top of a massive rock. The temple is reached via a difficult ascent of many carved steps. While climbing these steps, one can have a great glimpse of Chitrakoot below. Small idols of Lord Hanuman are placed along the path to be prayed to. According to legend, Lord Rama stayed inside this temple with Lord Hanuman after Lord Hanuman set Lanka on fire and returned. Here, Lord Rama assisted him in calming his rage. A few other shrines devoted to Lord Rama, Mother Sita, and Laxman can be found higher up.

Best Time to Visit in Chitrakoot

The greatest time to visit Chitrakoot, however, is from October to March. The months of October and November provide some of the best magnificent views in and around the city. From December through March, the weather is ideal for all expeditions and tourism activities.

How to Reach Chitrakoot

Main Railway station is situated at Karwi, This is connected by all famous cities with Railway track.
Main Railway Route from Chitrakoot is as follows :