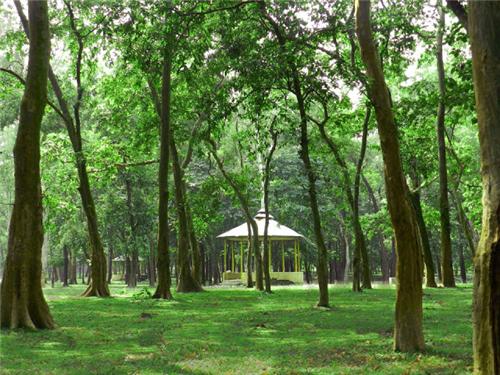 Dakshin Dinajpur, often known as South Dinajpur, is a district in West Bengal, India. It was formed on April 1, 1992, when the former West Dinajpur District was divided. Balurghat is the district’s headquarters. At Buniadpur, it is divided into two subdivisions: Balurghat and Gangarampur.

Bangarh is a historical town in Gangarampur, West Bengal, India. Bangarh was the ancient city that served as the administrative centre of KotivarshaVishaya (territorial division), which was part of the larger administrative unit of PundravardhanaBhukti, which had Mahasthangarh as its capital throughout the Chandra, Varman, and Sena periods. Following the Senas’ defeat by the Muslims led by Bakhtiar Khilji, Devkot was created as their capital, where Bakhtiar died.

The local tourism agency has also created intricate plans to attract more tourists during this time of year. According to South Dinajpur tourism department sources, because the Angina bird sanctuary has the potential to attract a large number of tourists, the department has taken the initiative to put the required measures in place. Because of its proximity to the border, Angina has frequently turned into a battleground, since free passage of criminals might be fully obstructed.

Hili is a land port and border checkpoint on the Bangladesh-India border that is being constructed (in 2018) as an integrated checkpoint (ICP) to facilitate the transit of goods and persons. As part of Hili is located in Bangladesh, the opposite side of the border is known as Hili Land Port in HakimpurUpazila in Bangladesh’s Dinajpur district. Trucks passing across the border carry out a significant amount of trade. Hili has a customs office for export/import. The Intergovernmental Agreement on Dry Ports is a United Nations treaty signed in 2013 to foster cooperation in the development of dry ports in the Asia-Pacific area. Hili is located on the India-Bangladesh border, which is known as a porous border. West Bengal is home to 2,216 kilometres of the 4,096-kilometer-long India-Bangladesh border. In Dakshin Dinajpur, around 11,000 people live close or near the zero line. Dakshin Dinajpur district contains around 252 kilometres of international border.

The months between October to March are ideal for visiting South Dinajpur in West Bengal.

How to Reach South Dinajpur

Nearest rail station is Balurghat, which is the district headquarters of Dakshin Dinajpur. Trains from Kolkata are available for Balurghat on regular basis.

Balurghat, the district headquarters of Dakshin Dinajpur, is the nearest train station. Balurghat is served by trains from Kolkata on a regular basis.