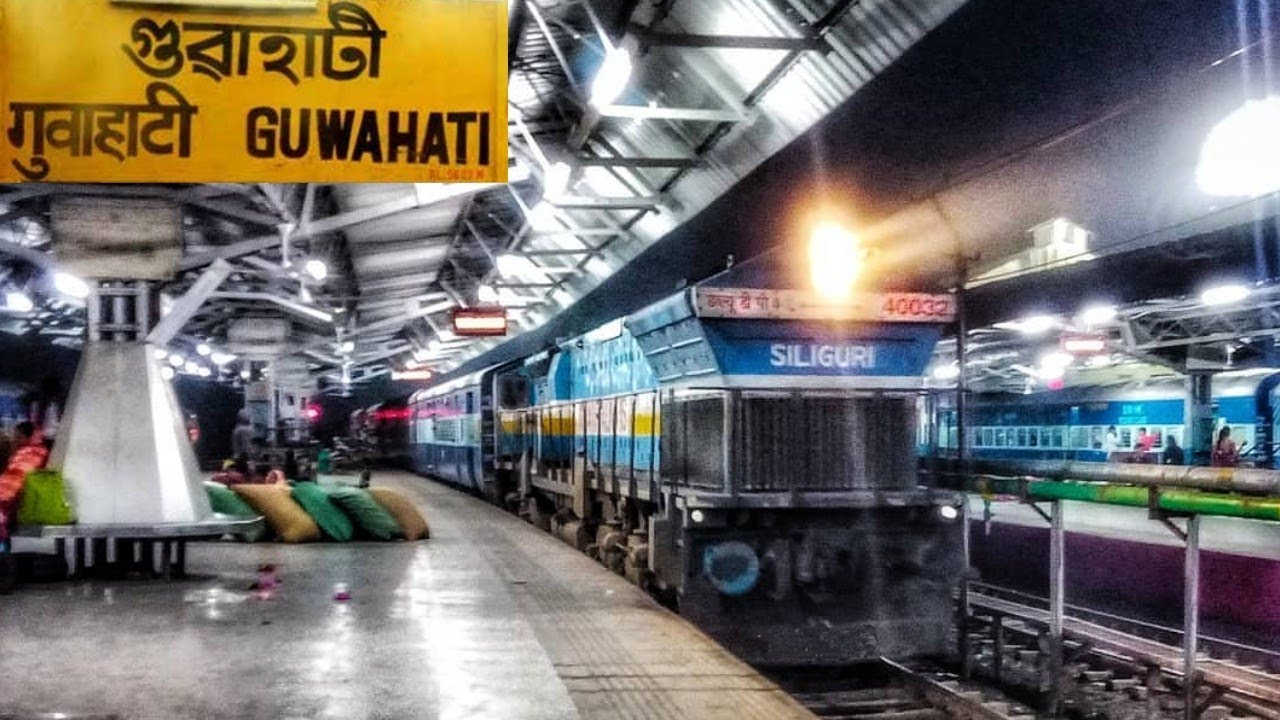 Guwahati is a vast town on the Brahmaputra River in Assam’s northeastern Indian State. The sacred monuments such as the Kamakhya Temple, which has temples to the Hindu deities Shiva and Vishnu, are well recognised here. To the east lies a tempular center with planetary shrines, the Navagraha Temple, dating from the 18th century. In Peacock Island, on the river lies the Temple of Umananda, dedicated to Siva and covered by gravures.

Guwahati was once known as Pragjyotishpur, the north-eastern capital of Assam (the City of Eastern Light). Its etymological base comes from the terms “Guwa,” which mean arca nut, and “Haat,” which mean market. Guwahati is the political capital of the state, Dispur, located between scenic hills on the eastern sides of the Himalayan mountains. Guwahati is a crucial tourism connection and is a real draw for the seven other northeastern states.

Located at 55 metres above sea level, on the banks of the great Brahmaputra. Guwahati is the crossroads of three major roads: 31,37 and 40. The river is divided into two pieces, and North Guwahati is a quasi-divided city. You may access it by the Saraighat Bridge, or by the river ferry. It’s 1182 miles to Calcutta, Guwahati’s closest major city. The capital cities are from 110 to 650 miles in other North-Eastern states. The city has 180 cm of yearly precipitation (from May to September). The temperature in the summer is between 22°C, 38°C, while in the winter the temperature varies between 10°C and 25°C. The best weather in Guwahati is in from October to April.

The ever-expanding metropolis still has a lovely charm. People claim King Narakasura, a monster, founded this old city. The old ‘Kamrup’ is another factor for the attractiveness of Guwahati. This is Kamadeva’s birthplace, God of Love. Bohag Bihu, marking the beginning of the Assamese New year, happens somewhere in the middle of April, is the most remarkable celebration here. Different native specialties are then accessible like as pithas, larus and other sweet meats. These are all vegetarian preparations. Another great celebration is the Durga Puja, which took place in October.

The famed Amboubachi Mela, which attracts people from all across the country, is located in June and July at Kamakhya temple.

The wet subtropical climate of Guwahati in the country of Assam has an average yearly temperature of 25oC and an extreme of 40oC. The city is between the powerful river Brahmaputra and the plateau of Shillong. Guwahati also has a decent hill network around it, which contributes much to the region’s sub-tropical geography.

Summers in this north-east town begin in April and only remain until next month. The temperature might rise in this period to 40 ° C and make sweatful day-by-day travels to the city.

A significant quantity of precipitation comes into the city during the moonsoon season. It begins in June and runs until September. Therefore, some good months to explore Guwahati’s outskirts.

Guwahati Winters provide travellers with a cool climate to discover their attractions. From November the cold season begins and goes on until February. During these months, temperature ratings might dip to 5°C and are obviously the greatest time for Guwahati this season.

The town of Guwahati boasts the International Airport of Lokpriya Gopinath Bordoloi to handle everyday flights. It is well linked to the main cities in India such as Delhi, Mumbai, Kolkata and Bangalore, also known as Guwahati International Airport. Flights from overseas cities such as Bangkok and Paro are also operated.

Among the numerous well-known tourist attractions, the Kamakhya Mandir is one of the city’s most important religious monuments. According to Hindu mythology, this temple is one of the Shakti peethas. Many worshippers go long miles to this temple to offer prayers to the deity. The shrine is located at the summit of Nilachal Hill and is easily accessible by any local mode of transportation from the city. The Bhubaneshwari Temple, located just above the Kamakhya Mandir, is another notable temple in the city.

Guwahati is famously positioned on top of Nilacha hill 10 miles from the railway station, mainly because of his Kamakhya temple. The king Naranarayan was established in the 10th century by the koch and is known to be the most sacred of the Tantric temples of Shakti worship worldwide. Animal sacrifice to please the goddess is a frequent practise here. There’s another little temple above Kamakhya, Bhubaneshwari, from whence one may see the city with a bird’s ey

During the ancient times, this location was a centre for the study of astrology. Another tourist destination in the city is the Shiva temple of Umananda, which may be reached by boat or ferry. The Umananda Ghat is a nice location where you may spend time with your loved ones. Another attraction not to be missed when in Guwahati is the Vashistha Ashram.

On an island in the midst of the Brahmaputra, Umananda Shiva Temple, accessed via motor yacht and Umananda Ghat public ferries.

The “Navagraha temple,” a historic centre of astrology and astronomy, stands atop another hill in eastern Guwahati. The primary lingam, housed in a red beehive dome, has nin other planets (graha)-Sun, Moon (Chandra, Soma), Mercury, Venus (Sukra), Mars (Mangal, Jupiter (Brhaspati) and Saturn around the primary lingam (Sani). Two more ones were added: Rahu and Ketu, the head of the Dragon, the tail of the Dragon, and the moon’s up and down nodes.

The Vashistha ashram, with a lot of greenery and three magnificent rivers, Lalita, Kanta, and Sandhya, lies nearby. There are three shrines. It is located 12 kilometres from the station and is said to be the residence of the sage Vashistha. Many more temples are spread across the town as well, including the temple of Ugratara known for its gold statue and buffalo sacrifices.

Guwahati tourism would be completed without a visit to the Guwahati Zoo. The zoo boasts a large variety of animal animals and is a popular destination for children. The ISCKON Temple is about two kilometres from the city and is a tranquil and pleasant site with a peaceful appealing building. Listen to bhajans and see aartis here, nd spend some time alone, experiencing the warmth of the atmosphere. Another attraction in the city is the Nabagraha Mandir, often known as the Temple of the Nine Planets.

In the Guwahati Zoo, which is the country’s largest natural zoo, you have to visit these holy places. Assam’s rich cultural heritage is home to many museums, including the State Museum, the Museum for Anthropology, the Museum for Forestry and the Cottage Industries Museum. One of the greatest in the country is the Guwahati planetarium, located on MG Road.

Among the city’s other tourist attractions, the Srimanta Sankardeva Kalakshetra is a cultural site worth seeing. There are wonderful pathways, a lot of vegetation, water pools, museums, and an open theatre. The museum displays a variety of precious artefacts associated with the legend Dr. Bhupen Hazarika. Shilpgram and the breathtaking sunset vista along the Brahmaputra River are two more must-see attractions in Guwahati. You need to visit the Srimanta Sankardev Kalakshetra to complete your Guwahati trip. This sophisticated complex in Panjabari was built in the 1990s and offers a one-stop evaluation of the region’s creative brilliance.

On the banks of the Manas River sits the Manas wildlife sanctuary, 176 kilometres from the city. It is the only such tiger project in Assam.

Also worth seeing is Pabitora, a little shrine for animals 60 miles from Guwahati. Here there are many rhino and several types of deer

The Hindus, Muslims and Buddhists are holy to Hajo, 25 km west of Guwahati. The town has the Hayagriba Temple of Madhava, which may be reached through a lengthy staircase of stone. There is a big pool under the staircase that houses one of the elderly inhabitants of Hajo: a huge turtle. Hajo is known for his bell metal work as wel

The natural lagoon and a beautiful site to picnic in Chandubi is 64 kilometres from the city. The lake has extensive fishing and rowing options, and is a fantastic holiday destination

Madan Kamdev is known for her imposing archaeological remains and Durga Temple from the 11th and 12th centuries, around 35 miles from Guwahati

Tezpur is a city of historical value and adventure sports 181kilometers east of Guwahati.

The monastery and shrine consecrated to the Vaishnavite Saint Sankardeva was remarkably located near Barpeta 185 kilometres from Guwahati.