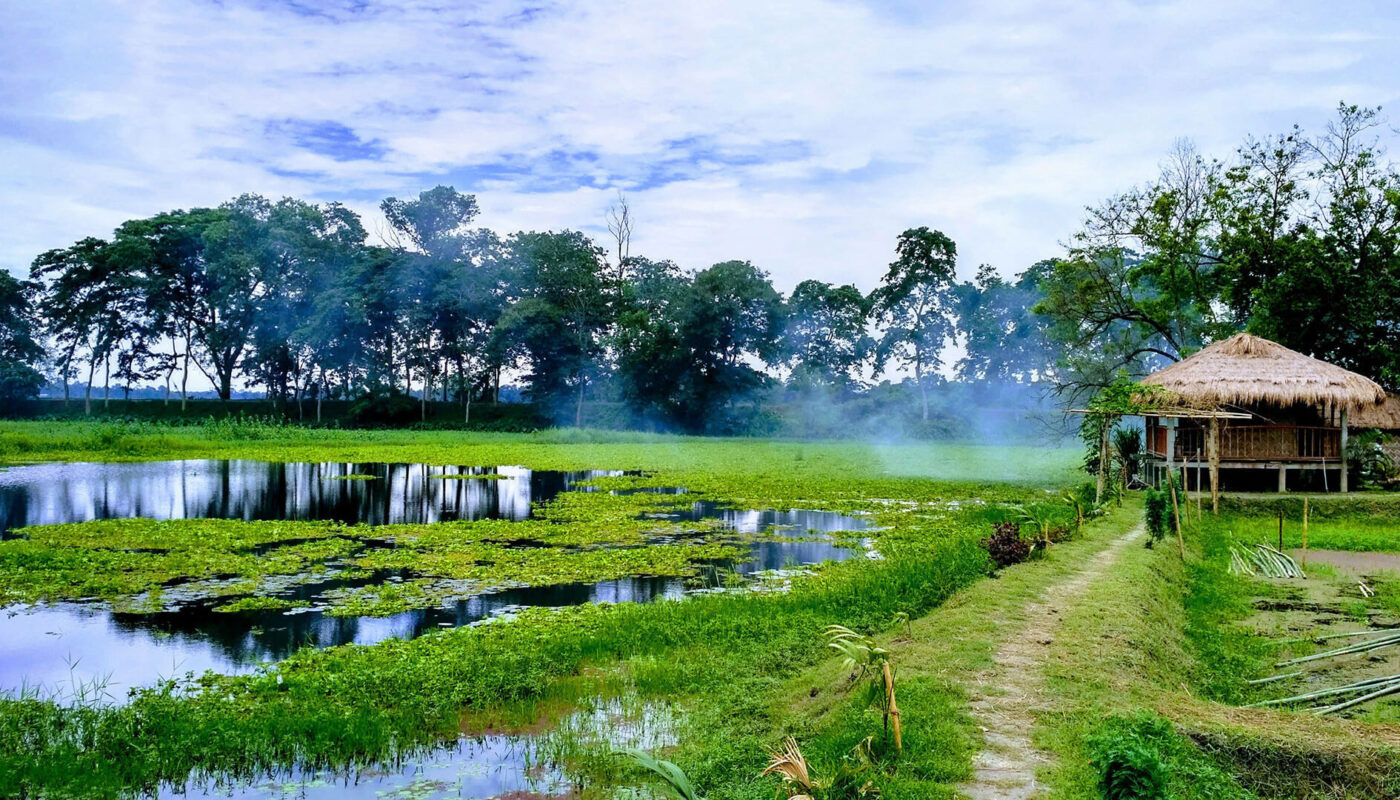 Mjuli or Majoli is a river island in the Brahmaputra River in Assam, and it was the first island in India to be designated as a district in 2016. It had a size of 880 square kilometres before the turn of the twentieth century, but due to erosion, it only comprises 352 square kilometres as of 2014. Jorhat is 20 kilometres away from Mjuli. You may take the bus or a cab to the Nimati Steamer Ghat, where ferry services are available. The journey takes more than three hours, including three bus journeys and two boat crossings. The river Subansiri flows on the north bank, while the great Brahmaputra flows on the south bank, separating the island from the mainland. The town of Lakhimpur lies to the north, while Golaghat lies to the southwest. Sibsagar is to the southeast, while Jorhat is to the south. Dibrugarh District is located in the far east.

Majuli is a beautiful green environment-friendly, pure, and pollution-free freshwater island in the Brahmaputra River, only 20 kilometres from Jorhat and 347 kilometres from Guwahati. Majuli is the world’s largest river island, with a total size of 1250 square kilometres, and it attracts travellers from all over the world. Majuli, one of India’s most peculiar sites, is also a strong contender for a spot on UNESCO’s list of World Heritage Sites. Majuli’s culture is distinct and rather intriguing, and it is one of the main reasons why people adore this town so much. It is also known as Assam’s cultural capital.  All of the events celebrated here are joyful and energetic. The biggest festival in Majuli is called Raas, and it is a thrilling and fascinating sight.

Places To Visit In Majuli

Majuli, the world’s largest river island, is located on the river Brahmaputra in Assam and is created by the Brahmaputra in the south and the Kherkutia Xuti linked by the river Subansiri in the north. It is home to numerous migrating birds, making you feel at harmony with nature. Majuli, located 1100 kilometres from the mouth of the Brahmaputra, had an area of 1256 square kilometres in 1991, but owing to soil erosion, it has now shrunk to 875 square kilometres.

Majuli has been the Assamese civilization’s cultural capital since the 16th century, and its major village, Naghmar, holds all of the key events, festivals, and prayers. The city has 22 Vaishnava Satras, the earliest of which was constructed in the 15th century by Sankaradeva, the father of Assamese culture. It is a good study centre for neo-Vaishnavite philosophy. These draw a large number of tourists.

Majuli’s events draw a large population as well. The Raas Purnima, which takes place in the Hindu month of Kartik, has a dance performance based on Lord Krishna’s life, and the Majuli festival, which includes unique festivities, attracts cultural troupes from all over Assam. Other exciting festivals include the Paal Naam at the end of Autumn and the Bathow Puja, where Lord Shiva is worshipped.

Mishing, Assamese, and Deori are the local languages. Agriculture is the town’s major source of revenue; around 100 different types of rice are farmed in Majuli. Locals consume Komal Saul as a breakfast cereal, whereas Bora Saul is a sticky brown rice used to make Pitha, a traditional cake. Other prominent economic pursuits include pottery, handloom, boat building, fishing, and dairying. Majuli’s face masks and ceramics are must-haves.

BEST PLACES TO EAT IN MAJULI

Majuli serves traditional Assamese food to guests. Khar, Laksa, Tenga, and a few types of rice are among the popular things available here. Make sure to sample the Pitha and Komal Saul cereals.

Majuli’s average lowest and maximum temperatures are as follows. Majuli’s best time to visit is also indicated. Majuli is to coincide with the rasleela, during the time of the full moon in Kartik (November); nevertheless, Majuli can be visited all year. During the rainy season, much of the island floods, although this actually makes travelling around (by boat) simpler. What you can do to help Majuli is as follows: Petition your Member of Parliament to highlight the matter and urge on bringing in government resources to investigate the situation and find solutions for protection. Visit Majuli as a concerned visitor and chronicle the island’s history.

Majuli is a scenic, lush green, and pollution-free river island on the Brahmaputra River. It is the world’s largest river island, attracting visitors from all over the world. Majuli is also a strong contender for inclusion in the list of UNESCO World Heritage Sites. Majuli’s culture is distinct, as it is mostly populated by Tribals. It is also known as Assam’s cultural capital. The events held here are all filled with pleasure and vibrancy, as well as a lot of music and dance. The primary celebration of Majuli is called Raas, and seeing it is an unforgettable experience.

How to reach Majuli by flight

Majuli is inaccessible by air. There is no airport in the area. Jorhat is the sole city that connects Majuli to the rest of the world. Jorhat is easily accessible because to a well-developed airport. You may then begin your trek to Majuli from there.

How to reach Majuli by road

Because Majuli is a river island, it lacks a well-maintained road infrastructure. As a result, you won’t be able to take a bus or cab to Majuli. Again, the only way to reach this gorgeous island is to travel to a nearby city, namely Jorhat.

How to reach Majuli by train

Majuli is not served by a railway. Majuli is preserved as natural as possible because it is not commercialised. As a result, no railway lines are installed there. If you want to go by rail, you may take one to Jorhat, which is linked to Guwahati, a major Assam city.

How to reach Majuli by Waterways

Majuli can only be reached by one kind of transportation, namely waterways. Ferries are available to transport you to this lovely river island. Because Majuli is surrounded by water on all sides, boats and ferries are utilised to go from one part of the city to another.

For a one-of-a-kind experience, you may employ the boat services to travel along the river. To move about, you may also hire bicycles.

Where to stay in Majuli:

Majuli does not have an established tourism infrastructure. There are no hotels in the area. Guestrooms are available on several satras. They will almost probably be accessible if you write ahead of time. Natun Kamalabari, Uttar Kamalabari, Auniati, Bhogpur, and Dakhinpat are among the Satras that have such amenities and can readily accommodate guests. The first two are both within walking distance of Kamalabari. The next two are a little further distant (approximately six kilometres), and Dakhinpath is at the far end of the island. If you want to get to Dakhinpath, there is a boat that runs directly from Neemati to Dakhinpath. In addition to the Satra facilities, the island has Inspection Bungalows (the one at Kamalabari is conveniently positioned) and a Circuit House at Garamur, which serves as the sub-divisional headquarters. You might write to the Sub-Divisional Officer, Garamur, Majuli, Assam, about the Inspection Bunglows and Circuit House.

What to see: On the island, there are twenty-one Satras, some of them are still highly active in the tradition and training of dance, theatre, music, art, and craft. You may rent a boat and ride along the river early in the morning while bird-watching, as well as visit farms and residences to experience agriculture and weaving for yourself.