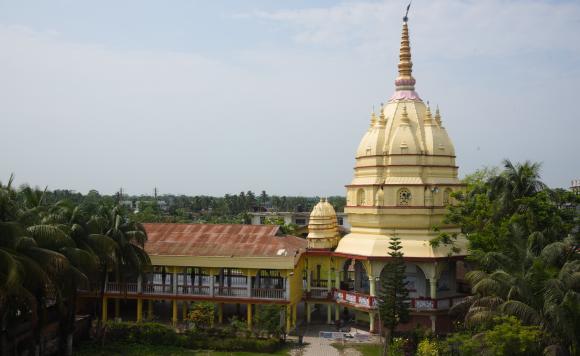 Nalbari is a town and a municipal board in the Nalbari district of Assam, India. Nalbari town is also the administrative centre of the Nalbari District. The village is one of many that would be included in the planned “State capital region.” The presence of many Sanskrit education institutes, such as Kamrup Sanskrit Sanjivani Sabha, has earned Nalbari the nickname “Nabadeep.”

Best Places to Visit in Nalbari

The temple, dedicated to Lord Krishna, was built in 1965 on land provided by Rambahadur Pratap Narayan Choudhury. The puja Mandab was established in 1968 with financial assistance from Lt. Damahuram Mahajan. The new Math was built between 1976 and 1985. The temple is distinctive across Assam because of the annual Ras festival, which has been conducted here in the month of November since 1946 with great pomp and splendour; the festival, of course, has been held elsewhere since 1933.

The temple is dedicated to Lord Shiva and is said to have been erected 500 years ago. According to folklore, a priest once possessed a cow that refused to be milked. Following the cow, the priest discovered that it provided milk on a bush of “virina” (type of grass). When the king found out about it, he had the area dug up and discovered a Shiva Linga. A temple was erected, initially known as Birreswar or God or Virina, then Billeswar, and finally Belsor. Belsor is now a well-developed community with convenient access. This temple has drawn numerous followers and royal support throughout the years, notably the Ahom King, Lakshmi Singha, who reconstructed the temple after it was destroyed by natural tragedy. It is roughly 10 kilometres south-west of Nalbari Town.

This Kali Mandir in Ballilesha hamlet is a live Sakti Peeth and is said to have been erected by the Ahom King, Siba Singha (1718-1744). Inside the temple, there is an 18-inch-high statue of Kali fashioned of Asta Dhatu. Though there were also Bishnu Doul and Shiva Daul, they were nearly devastated by the 1897 carthquake. However, a Kali Pukhuri encompassing 8 Pura of land still remains. It is located on the Pagaldia River’s bank, about seven kilometres south-east of Nalbari town.

Best Time to Visit in Nalbari

Winters are the greatest season to visit Nalbari, as they are in other parts of Assam. Summer is also a fantastic time to visit.Winter is the recommended time to visit the place because rest of the year it is either too hot or raining heavily.

How to Reach Nalbari

Assam’s Nalbari is well connected to the rest of India. It is conveniently accessible by all forms of transportation as one of the state’s most significant tourist sites. The city boasts a decent cab service, which is the most convenient method to go from one section of town to another.

The nearest airport is Lokpriya Gopinath Bordoloi International Airport, which is about an hour’s drive from Nalbari. Guwahati taxis are accessible from and to Nalbari.

Nalbari has its own train station with connections to Guwahati and other state cities. Direct trains are also available from Delhi and Howrah.

To go to Nalbari by car, you should first travel to Guwahati. The distance between Nalbari and Guwahati is around 60 kilometres and is covered by both state-owned and commercial buses. Bus service is also accessible from other nearby cities.