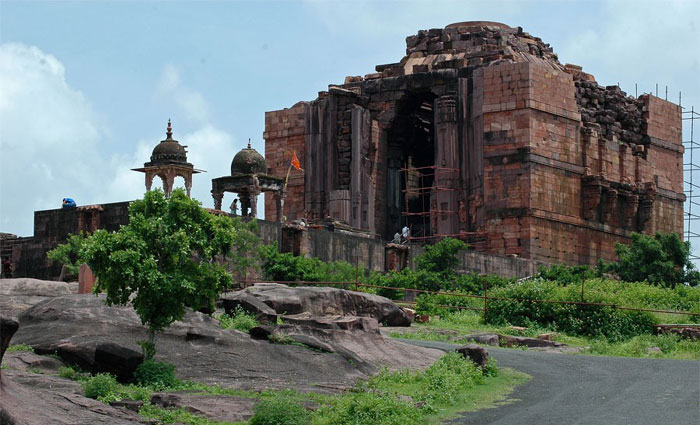 Best Places to Visit in Bhojpur

In Tarari block’s Dev village, there is a statue of the SUN GOD, as well as various other deities. These statues are supposed to date from the 14th century or before.

Jagdishpur was the home of the heroic warrior of 1857. His fort is still standing to remind us of the great son of the soil who fought for independence to the very end.

The current Maharaja College campus is a significant historical landmark. There is an entrance to a tunnel that is thought to connect to Kunwar Singh’s Jagdishpur fort.

Shahjahan built this five-gumbad Masjid, the second of its sort in India, in 1623 AD. This is close to the Aranya Devi shrine.

This Masjid was erected with Aurangjeb’s aid in 1817. It is located in Ara’s Maula Bagh muhalla.

This is Aranya Devi’s well-known temple (Forest Goddess). She is said to be the Ara town’s divinity goddess. The first statue is of ADI SAKTI, while the second is of the PANDAVAs. The temple is centuries old and attracts a large number of pilgrims every day. It is perched on the ledges of stone rocks.

This very old Laxmi-Narayan statue may be found in the Piro block village of Chaturvuj.

An old statue of Goddess Jagdamba can be found at Mukundpur village, Charpokhari block.

Masadh Village is home to a century-old Jain Temple.

This temple is located in the Sahar block’s Ekwari village. This was created during the Mughal era.

It boasts such a library, which houses a one-of-a-kind collection of Jainism-related materials.

It is an ashram in the Sahar block of Dhrampur village.

There are a few antique statues associated with Banasur. It is located on the Shahpur – Billoti Road.

This temple in Perhap village features a statue in the Southern architectural style.

Shershah erected this Masjid, which is located in GarhaniBazzar. Work on the renovations is now underway.

It is located in Sahpur and is a well-known mazar of a local Muslim saint.

Kunwar Singh (1777–26 April 1858) was a prominent leader during the 1857 Indian Rebellion. He belonged to the royal Ujjainiya (Panwar) Rajput family of Jagdispur, which is now part of the Bhojpur district of Bihar, India. He led a small band of armed soldiers against troops under the leadership of the British East India Company at the age of 80. He was the principal organiser of the Bihar anti-British movement. Veer Kunwar Singh is his given name.

Troops under the leadership of the East India Company were comprehensively routed in his final fight, fought on April 23, 1858, near Jagdispur. On the 22nd and 23rd of April, despite being injured, he battled heroically against the British Men, driving them away with the support of his army, bringing down the Union Jack from Jagdishpur Fort, and hoisting his flag. He returned to his palace on April 23, 1858, and died on April 26, 1858.

Best Time to Visit in Bhojpur

The best time to visit Bhojpur is immediately following the winter season.

How to Reach Bhojpur

There are no direct flights between the two cities. Patna Airport is the closest airport.

Arrah, the district headquarters, is well connected by train to the rest of the country’s major towns. More than 150 trains pass through Ara Junction each day (ARA). Other than Ara, the district’s main railway stations are Bihiya, Kulaharia, Banahi, Koelwar, Karisath, Piro, and Garhani, which link most of the district’s cities and villages.

District Headquarters Arrah is well connected by road . Arrah , Jagdispur , Piro , Behea are the Cities in this district having road connectivity to major towns and remote villages. Arrah is about 53 KMs by road to Patna (Capital of Bihar). You can easily get regular buses to Arrah from other major cities of the state.