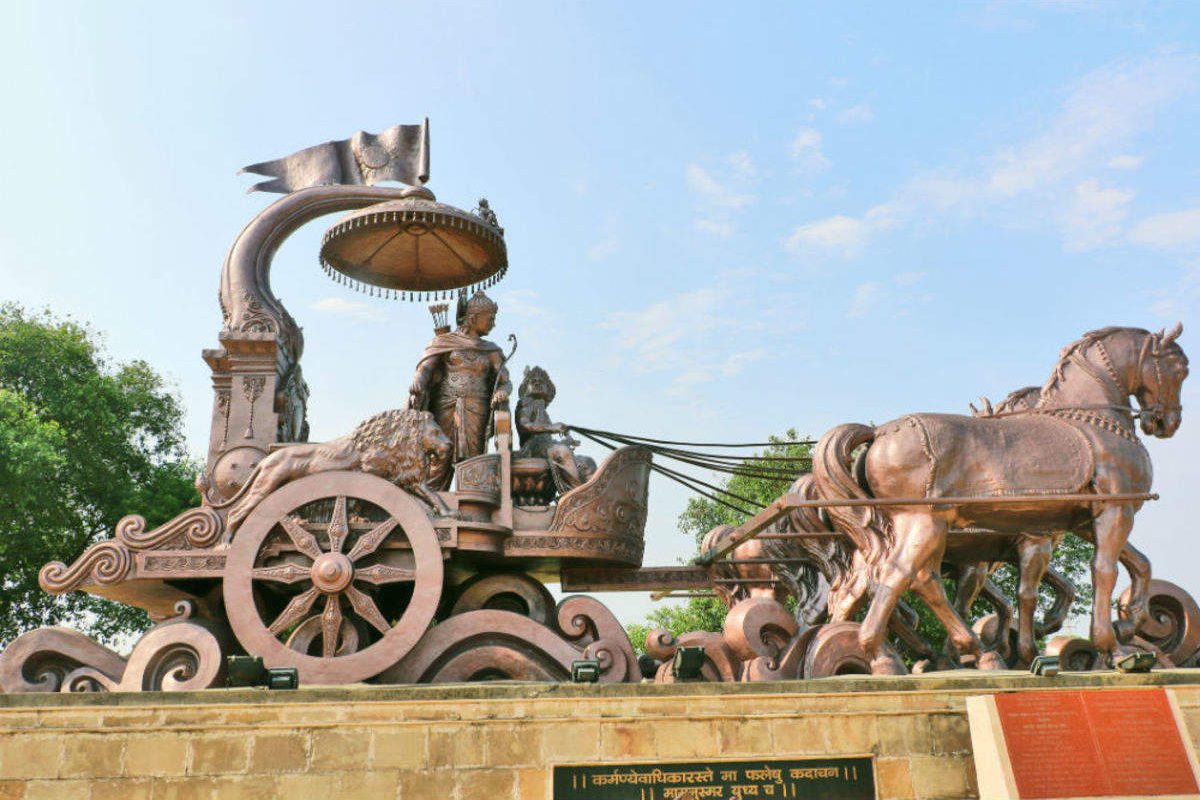 Kurukshetra is a city in Haryana, India’s northernmost state. The location of the Hindu epic poem “Mahabharata” is well-known. At the Kurukshetra Panorama and Science Centre, the great battle described in the book is represented in a huge tableau. The hamlet of Jyotisar, west of the city, is a pilgrimage destination where the sacred “Bhagavad Gita” literature was originally given, according to the “Mahabharata.”

Best Places to Visit in Kurukshetra

The tiratha is six kilometres from Pehowa on the Ambala Road and 31 kilometres from Krukshetra town. This is an important pilgrimage site associated with the saints Vashishta and Vishwamittra. The location is also significant because it is the confluence of the rivers Saraswati and Aruna. The significance of this tirath is vividly described in the Mahabharata and the Vamana Puran. However, the tirath is currently unknown for the storey told in the epic and the purana. Rather, it is well-known for being a Shivaite temple known as the Sangameshwar Mahadev temple. A Shiva temple, or Sangmaeshwar Mahadev, is located nearby, along with a small tank. Thousands of pilgrims and devotees visit the temple on a regular basis.

This This tirath is about 18 kilometres from Kurukshetra. The Tirtha is named after Rishi Shalihotra, and the village is named after the Saras bird. Yaksha Yudhishatar samvad is thought to have been held here.

The inauguration of Tirupati Balaji (Lord Vishnu) temple on July 2 is expected to boost religious tourism in Kurukshetra. Haryana Chief Minister Manohar Lal Khattar dedicated the grand temple built at the historic Brahmasarovar in Thanesar, Kurukshetra. After special prayers were held at the temple, it was declared open to devotees. The temple’s doors will be open from 6 a.m. to 9 p.m.

Devotees of Lord Tirupati Balaji from Haryana or North India can now travel to Kurukshetra to seek Lord Balaji’s blessings instead of going to Tirupati in Andhra Pradesh.

Haryana State Council for Science & Technology, Govt. of Haryana, in collaboration with National Council for Science Museums, Ministry of Culture, Govt. of India, established the Kalpana Chawla Memorial Planetarium on Kurukshetra-Pehowa road (near Jyotisar Tirth) in memory of India’s first woman astronaut, Dr. Kalpana Chawla. The planetarium, which cost 6.50 crores to build, spans 5 acres of land. The planetarium, which is surrounded by sprawling green fields and a lush Astro-park, is ideal for those looking to escape the din and dust, hustle and bustle of big cities. The planetarium provides a peaceful environment as well as astronomy shows that use cutting-edge technology. In a very short period of time, the planetarium has emerged as one of the city’s most unique and popular tourist attractions.

The excellent programmes and supporting exhibits located inside and outside the Astro-park assist students in particular, as well as the general public, in learning about this frontier area of science and satisfying their curiosities with a wide range of information about space. The astronomy shows are usually held in Hindi, but special shows in both Hindi and English are also held on demand for groups.

The Kurukshetra Panorama & Science Centre is a stunning cylindrical structure that houses exhibitions as well as working models for visitor activities. The Kurukshetra Panorama and Science Centre has two types of exhibits, one on the ground floor and one on the first floor with cylindrical walls. A few scientific artefacts are also on display in the centre.

On the ground floor, there is an exhibition called ‘India-A Heritage in Science, Technology, and Culture,’ which includes working and interactive exhibits on ancient Indian concepts of matter properties, atom structure, geometry, arithmetical rules, astronomy, medicine, and surgery. The main attraction of the Centre, housed in a tall and cylindrical building with elegant architecture and ambience, is a life-like Panorama of the epic battle of Kurukshetra. Standing in the cylindrical hall’s centre, one can feel the towering 34-foot-high paintings of the 18-day battle between the Pandavas and the Kauravas come to life before his eyes.

This is combined with a diorama of the battleground that realistically depicts the carnage. The chanting of Gita and distant war crimes, combined with lighting effects, create the ideal atmosphere. Outside the four walls of the center’s building, a science Park has been established. The centre is located in Kurukshetra’s town centre, which has many local hotels and dharmshalas with deluxe and economy accommodations. Panorama is also home to a Haryana Tourism Corporation guest house.

Sannihit Sarovar, believed to be Lord Vishnu’s permanent abode, is located 3 kilometres from Kurukshetra on the Pehowa Road. It is said that the entire range of Tirthas congregates here on the day of Amavasya, and legend has it that if a man performs Shradhs during the solar eclipse and bathes in this tank, he receives the fruit of 1000 Ashwamedh sacrifices.

Pilgrims flock to this holy site during the solar eclipse. Visitors to this place can learn about their ancestors from the Purohits, also known as Pandas, who have been keeping records of pilgrims from all over the country for centuries.

Sikh Gurus have also visited this holy site on occasion.

Braham Sarovar is associated with Lord Brahma, the creator of the Universe, as the name suggests. Taking a dip in the holy water of Sarover during a Solar Eclipse is thought to be equivalent to performing thousands of Asvamedha Yajnas. According to legend, King Kuru, the ancestor of the Kauravs and Pandavas, was the first to excavate this tank. Having seen its vast water body during a solar eclipse, Abul-Fazl, a courtier of Mughal emperor Akbar, described the vast water body of this sarovar as a miniature Sea. According to local legend, Yudhistar built a tower on the island in the middle of Sarovar to commemorate his victory in the Mahabharta battle. An ancient Draupadi kupa can be found on the same island complex.

Sarveshwar Mahadev is the name of Lord Shiva’s shrine on the northern bank of the Sarovar. According to legend, Lord Brahma himself installed the Shiva Linga here. In November and December, the annual Gita Jyanti celebrations are held on the banks of Bramsarover. Many devotees consider one prikarma of this tank to be the equivalent of visiting all the tirths within the holy circuit of Kurukshetra 48 Kos.

Jyotisar – The Birthplace of Gita

Jyotisar is the sacred Jyotisar, the birthplace of Gita, and the most revered tirtha of Kurukshetra. It is believed that the Mahabharata battle began at Jyotisar, where deluded Arjuna received the eternal message of Gita from its propounder Lord Krishna on the eve of the battle. It is said that Adi Sankaracharya discovered the location during his visit to Himalaya in the ninth century of the Christian era. The King of Kashmir built one Shiva temple at the tirtha in 1850 A.D. In 1924, the King of Darbhanga raised a stone platform around the holy banyan tree, which devouts believe is evidence of the celestial song, i.e. Gita. Sankaracharya of Kanchi Kama Koti Peetha in 1967. On the platform facing east, I installed the Chariot depicting Gita Updesha.

The tirtha may have once been a part of the ancient temple, but they were destroyed by the fury of mediaeval invaders. On the main platform of the temple, an architectural member of a 9th-10th century temple is placed. In the evenings, the Haryana Tourism Department hosts a light and sound show in Hindi and English.

Krishna, the personification of intellectual and spiritual glory, has been a source of worship since the character was deified as a God. His multifaceted personality elevated him to the status of deity. Unraveling Krishna’s mystery is a magical experience because each time you untangle the fabric of Krishna, you discover a new dimension in it. Krishna’s divinity and humanity, as revealed by his character in literature, are unparalleled in the history of human civilisation. He has been a constant source of inspiration for artists and writers. He is the most well-known figure in Indian myths and legends.

Shaktipeeth Shri Devikoop Bhadrakali Mandir is also referred to as “Savitri Peeth,” “Devi Peeth,” “Kalika Peeth,” or “Aadi Peeth.” According to our scriptures, unable to bear the slander and calumny heaped on her husband, Lord Shiva, Devi Bhagwati sacrificed her life and became a ‘Sati.’ Shiva, distraught, began pacing all over the universe while clutching her holy dead body to his heart. While watching this, Lord Vishnu used his ‘Sudarshan chakra’ to cut her dead body into 52 pieces. As a result, the locations where these parts fell became sacred “Shaktipeeth.” All of this was done for the greater good of all. Among the 52 holy Shaktipeethas are Naina Devi, Jwala ji, Kamkhya ji, and others.

Maa Sati’s right ankle is said to have fallen at the Shaktipeeth Shri Devikoop Bhadrakali Mandir in Kurukshetra. According to legend, before marching out for the battle of Mahabharta, the Pandvas and Lord Krishna offered worship here, praying for their victory and donating the horses of their chariots, beginning an age-old tradition of offering horses made of silver, mud, or whatever one’s means, once the desire was met. Shri Krishna and Balram’s Tonsure (head shaving) ceremony was also held at this Shaktipeeth Shri Devikoop Bhadrakali Mandir.

How to Reach Kurukshetra

The nearest airports are in Delhi and Chandigarh, both of which have road and train connections to Kurukshetra. From the airports, taxi services are also accessible. Kurukshetra is 160 kilometres away from Delhi.

Kurukshetra is connected to major cities such as Delhi, Chandigarh, and other significant sites via Haryana Roadways buses and other adjacent State Corporation buses. Buses to Delhi (160 km), Ambala (40 km), and Karnal (39 km) are accessible often. Kurukshetra lies roughly 6 kilometres from Pipli, a major road junction on National Highway No. 1, also known as the GT Road.

There are a variety of ways to get about Kurukshetra. Local buses, autos, taxis, and other modes of transportation are available.