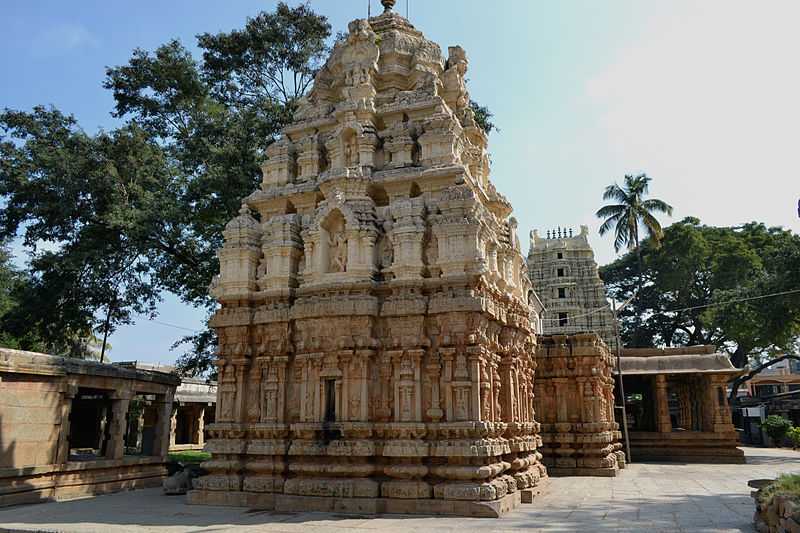 Kolar is a city in the state of Karnataka in India. It is the administrative centre of the Kolar district. The city is noted for its gold mines and milk production. Someshwara and Kolaramma temples are also located here.

Best Places to Visit in Kolar

Prior to the arrival of the Cholas, the Ganga clan governed “Kuvalala” land. Kolaramma (Pidariyar Chamundeswary of Saptha Matrikas) was the main God of the Saptha Matrikas. The Cholas rebuilt the temple. It is located in the city’s east. The temple is an excellent example of Ganga-Chola art and architecture. The ‘L’-shaped temple contains two sanctums connected by a Mukha Mantapa. Kolaramma is located in the northern Garbhagriha, to the south. In Mukha Mantapa, the Goddess may be seen through a grid of mirrors. The other Sapthamatrika statues, together with Ganesha and Veerabhadra, face east. This sanctuary contains a Sree Chakra. The second room to the north of this sanctuary is separated into two sections, with the inner one containing the Mortar idols of Saptha Matrikas. The vigraha of Muka Nachch iyar is located on the north wall of the outer enclosure.

It is a Vigraha named Cheluramma who is wrapped in a cloth. The Ganapathi idol has vehicles that resemble Anjaneya and Garuda, creating the notion that there are three Vigrahas in one. The temple’s Veerabhadra idol is likewise a work of art.

It is a lovely scenery three kilometres west of the city, on one of Satha Sringa Parvatha’s planes. The delicious water spilling out of Basavanna’s lips at Antharagange is a wonder to believers, a riddle to the knowledgeable, and above all, a source of delight. The stones here are naturally sculpted into a variety of forms. On a hilltop, there is a Deepa Stambha from which the seven settlements on the hills may be seen. After seeing Jalakanteswara at the foot of the hills, one ascends 250 stairs to Antharagange, where Kashi Visweswara resides.

The road leads to Therahalli on the other side, to the south. Veera Ganga erected the Gangadhareswara temple at Therahalli in the thirteenth century A.D.

This is a magnificent temple built in a large area with a large and gorgeous outside Mantapa, Mukha Mantapa, Antharala, and Garbhagriha. The open Mantapa is a work of breathtaking beauty. The Kalyana Mantapa in the south-west and Vasantha Mantapa in the north-east are excellent examples of Vijayanagara art and architecture. Someswara Swamy appears at Garbhagriha as a 1.5-foot-tall Linga. Ashta Dikpalakas are exquisitely sculpted on the Bhuveneswaris of Mukha mantapa, Vasantha mantapa, and the inner Dola mantapa of Kalyana mantapa. In the northwestern part, there is a subtemple dedicated to Parvathi. The temple’s Pushkarini is stunning, and the depth is astounding. The construction is excellent.

This settlement is 12 kilometres from Mulbagal. The range of hills here is known as Koundinya Giri, and the mythology of this kshetra is mentioned in the Brahmanda Purana. The large Vinayaka vigraha of 13.5 feet asks one to bend and worship before it. Despite its age, the temple contains Vijayanagara-style Mukha mantapa and Sukhavasi. Massive pillars with intricately carved sculptures may be found here. The entrance and outside mantapa are ornately ornamented. Mushika is standing in the outer mantapa, in presence of Lord. Someshwara temple, built on a boulder substructure, is located to the north of this temple. In the temple’s court yard, a 7 to 8-foot-tall vigraha of Vinayaka encourages visitors to stand and gaze. Despite the fact that the deity at Garbhagriha is facing east, the doors are facing south. The temple is made of stone. The deities of other temples that have fallen into disrepair are brought here and maintained.

It is located in the state of Karnataka’s south-eastern region and is known as Mudala Bagilu (The eastern door). The Anjaneya temple complex is located near the bus stop. Every day, the God Anjaneya is to be decked with Kedage (screw pine blossoms). This temple has the idols of Rama and Sita Lakshmana. The sub-temples house Lakshmi Narasimha, Venugopala, and other deities. This compound also houses Tirumala Venkatesha, Kanchi Varadaraja, and Tirupathi Govindaraja. Dashavathara Kostas has some lovely works on display. It has a large outer shell Gopura.

Sripadaraju mata is in town, while Brindavana of the Sripadaru is 2 kilometres distant in Narsimha Theertha. It is possible to visit the cave where Sri Vyasa Rayaru learned Dwaitha philosophy. Swayambhu is the Yoga Narasimha Swamy on the boulder. Rathotsava is celebrated throughout the month of jyesta (june-july)

It is a 12-kilometer journey from Mulbagal. It features a Ramalingeswara Swamy temple complex, a Sita Parvati temple atop the hills, and a piller inscription of Deevabbarasi, a Nolamba queen from the first millennium of the Christian period. Shankar Mutt’s Saraswathi temple is a good spot to meditate. Ramalingeswara swamy’s temple complex includes temples for Lakshmaneswara, Bharateswara, and Shatrughneswara. There are other shrines dedicated to Vali, Sugreeva, and Angada. Dakshina lttya is Avani’s name. According to tradition, this is the location of Valmiki Ashrama, where Sita gave birth to Lava and Kusha. To demonstrate, there is a “Lava Kusha linga” temple here (two linga idols in one: pannvatta which is a rare phenomenon in shilpa sastra). The natural tanks Dhanushkoti and Horaler Gundu may be seen on the approach to the highlands.

The temple, which resembles Tirupathi Venkateshwara, is located in Guttahalli, on the road from Mulbagal to Bethamangala. Bangaru Tirupathi is its name. The temple is built on a tiny hill, and the god faces east. The god may be viewed via a window cut into the western wall. On the approach to the temple, there are Shrines of Varaha, Yinayaka, and Anjaneya. On another hill, there is a temple dedicated to Padmavathi. In front of this facility is a large pond (Kalyani). During the month of Shravana, pilgrims flock in great numbers.

Lekkanna Dandesha, a Vijayanagara commander and the author of Shiva Tatlva Chintamani, erected this temple near Virapakshi. This is 4 kilometres from Mulbagal. Aside from the main temple, which is beautifully carved and adorned, there is a temple dedicated to Simha Vahana Durga. Durga is a four-armed goddess. A lion stands guard in front of Parvathi at the temple.

Manmatha Pushkarini is the name of the lovely temple tank. The temple’s enlrance Gopura is in good condition and exceedingly impressive.

Kolar Gold Fields (KGF) is a mining area and taluk in the Kolar District of Kamataka, India. Kolar Gold Fields’ headquarters are located in Robertsonpet. It comprises the township of the same name, namely K.G.F, where the majority of the residents are families of Bharat Gold Mines Limited (BGML) and BEML personnel (formerly Bharat Earth Movers Limited). KGF is located around 30 kilometres from Kolar and 100 kilometres from Bangalore. To the east of KGF is a series of hills, the highest of which is Dod Betta Hill, which is 315 feet above sea level. For nearly a century, the town was known for gold mining, which was finally halted in 2001 owing to low levels of gold output. In the early 1900s, India’s first power producing unit was established to serve KGF activities.

Budikote, often known as the “Fort of Ash,” is a tiny hamlet in the Bangarpet Taluk of the Kolar District of Karnataka, India. The nearest city, kolar Gold Fileds, is around 15 miles (24 kilometres) away. It is named after an ancient fort. It is also the birthplace of Tipu Sultan’s father, Hyder Ali.

It is 6 kilometres from K.G.F. on the road to Bethamangala, and it is lined with thousands of Shiva Lingas. It was built in 1980 and comprises eleven temples dedicated to various deities. Kotilinga is the place’s presiding god. It has a massive Shivalinga that is more than 100 feet tall. Basavanna of a similar shape and size is likewise dedicated here. The major feature of the temple is a massive linga measuring 108 feet (33 metres) tall and 35 feet (11 metres) tall Lord Nandi statue, surrounded by lakhs of lesser lingas distributed over 15 acres (61,000 m2). The Lord Nandi deity is situated on a platform 60 feet (18 metres) long, 40 feet (12 metres) wide, and 4 feet (1.2 metres) high. Within the property, eleven tiny temples for various deities have been built.

Best Time to Visit in Kolar

Kolar is best visited between October and March.

How to Reach Kolar

The nearest international airport is Bengaluru Kempegouda International Airport, which is around 67 kilometres from Kolar town.

In the Kodagu district, there is no railway station. Mysore Hassan and Mangalore in Karnataka, and Thalassery and Kannur in Kerala, are the closest railway stations to Madikeri (district headquarters, Coorg).

Narasapura, Kolar, and Mulbagal are all served by National Highway 75 (former NH-4), while other taluks are connected by a state highway and district roads. Bangalore, Narasapura, Kolar, Mulbagal, Chittor, Vellore, Katpadi, and Chennai are all connected via NH-75, which also links to Thirupathi. Mulbagal is around a 90-minute drive from Bangalore.