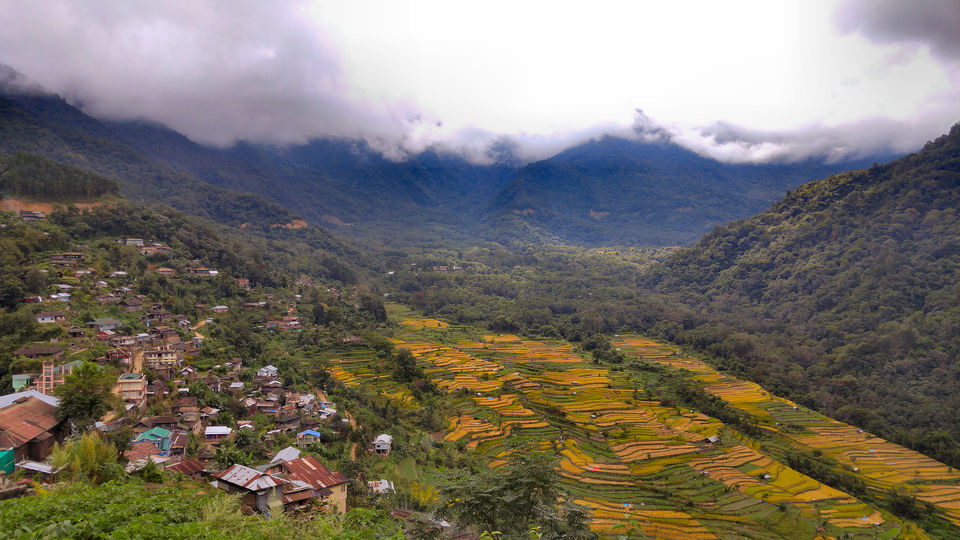 Kohima is the capital city of Nagaland, India’s northeasternmost state. It is the state’s second-largest city, with a population of nearly 100,000 people. Kohima, formerly known as Kewhira, was established in 1878 when the British Empire established its headquarters in the then Naga Hills. Dimapur, the gateway to Nagaland, is an irresistible part of the Northeast and a must-see travel destination. Dimapur means “the city near a great river” in Naga. Dimapur, with the Dhansiri River on one side and wooden meadows on the other, was the former capital of the Kachari tribe, traces of which can still be seen today. That is why there are so many temples and monuments here. Aside from archaeologists tracing its intriguing past, the area is still popular with business travellers due to its commercial centres. Although Dimapur has many notable attractions such as the Zoological Park, Ao Baptist Church, Diezephe Craft Village, Nagaland Science Centre, and Green Park, its main draw remains handicrafts and handlooms. Nagaland’s capital city, Kohima, is nestled among the hills and little-known forest. Standing at an elevation of 1500 metres, Kohima was prominently featured on the India Tourism map during World War II for the decisive battle fought here between India and Japan. When the British Empire established their headquarters in 1878, it was known as Kewhira. After the state of Nagaland was established in 1963, it became the official capital. It is now a prominent hilly hamlet of Nagaland that can easily match the standards of all prime hill stations in the NorthEast.

Kohima is one of the few places left untouched by modern commercialization and human activity. Kohima is without a doubt one of the most beautiful places in the world, with its breathtaking scenery, rushing streams, exotic wildlife, and picturesque valleys. Nagaland’s capital city, Kohima, is one of the most beautiful places in Northeast India. This place has captivated people for generations due to its untouched beauty. Kohima is an anglicised name given by the British because they couldn’t pronounce the original name–Kewhima or Kewhira–which comes from the Kewhi flowers found throughout the mountains. Kohima was once inhabited by the Angami tribe (one of the largest Naga tribes), but today it is home to people of all ethnicities from Nagaland and other neighbouring states.

Kohima, The Cherished Capital Of Nagaland

For the majority of its history, this location, like most others inhabited by the Nagas, was isolated from the rest of the world. The British arrived in this area in 1840, only to be met with stiff resistance from the various Naga tribes. After nearly four decades of fighting, British administrators were able to seize control of the territory and establish Kohima as the Administrative Headquarters for the Naga Hills District, which was then part of Assam. Nagaland became the 16th state in the Union of India on December 1, 1963, when Kohima was christened as the state capital.

During World War II, Kohima witnessed some of the fiercest battles, including the Battle of Kohima and the Battle of the Tennis Court, between the advancing Japanese army and the Allied forces. It was here that the Japanese Empire’s Burma Campaign turned on its heels, changing the course of the war in Southeast Asia. It was here that the Allied forces were able to halt the Japanese advance. The Commonwealth War Graves Commission-maintained Kohima War Cemetery is a major tourist attraction, with hundreds of soldiers interred here.

The people of Nagaland, particularly Kohima, are known for their warmth and hospitality, and visitors should not miss out on sampling some of the local cuisine. Nagas adore meat and fish and prepare some delectable dishes with them. Nagaland is known for its rich and vibrant culture, which tourists can experience during their visit to Kohima. Each tribe in Nagaland has its own ceremonial attire, which includes multicoloured spears, dyed goat’s hair, bird features, elephant’s teeth, and so on.

It is important to note that Kohima is protected under the Protected Areas Act, which requires domestic tourists travelling there to obtain an ILP (Inner Line Permit), which is a simple travel document. Foreign tourists are no longer required to obtain a Restricted Area Permit; however, they must register with the Foreigners Registration Officer (FRO) of the district they visit within 24 hours of arrival. Domestic tourists can obtain the Inner Line Permit from the following locations:

Nagaland’s traces can be found since 1840. The British attempted to invade Naga territory in order to establish an army camp. The local Naga people were initially resistant because they had never been overpowered by anyone, but after 40 years, the British were able to capture its 10,000 square kilometres, leaving the Eastern region behind. A war between England and Japan was fought here in 1944, and one can see glimpses of all of these events in all of its travel locations. Later, in 1963, it was designated as Nagaland’s capital city.

When we think of the best places to visit on a Nagaland tour, the first thing that comes to mind is War Cemetery, the final resting place of the soldiers who died in the England-Japan war. At the base of one of the two large crosses here, an inscription reads, ‘When you go home, tell them of us and say, For your tomorrow, we gave our today.’ The Cathedral of Reconciliation, which overlooks the cemetery, was built in 1965 and was partially funded by the Japanese government. State Museum is another fascinating tourist attraction in Kohima. The state museum, located directly north of the bazaar, houses an excellent anthropological collection of Naga masks, textiles, jewellery, and totem pillars from all 16 Naga tribes.

The Catholic Church on Aradura Hill, which also happens to be the largest wooden cross in the country; the Kohima Zoo, which is home to the Tragopan bird and the state animal, the wild buffalo; the Night Market, which sells souvenirs, street food, and toys for children; and the Deputy Commissioner’s Bungalow are all worth visiting during your Nagaland vacation.

Daredevils have many reasons to visit Kohima as well. This top travel destination in India is close to Mt Japfu, Nagaland’s second highest peak, and Dzukou Valley, Nagaland’s flower valley. Travelers frequently stop at the base of these travel destinations to trek and see the amazing variety of lilies and rhododendrons, as well as several bird species.

The colourful people of Nagaland are just as fascinating as the attractions. If you want to find out where these tribes are, you should visit two villages in Nagaland. One is Bara Basti, an Angami Naga tribe settlement on a hill overlooking town. Khonoma is another Angami Naga village, albeit a modernised one. The villages here are known for their unique agricultural skills, including the cultivation of 30 varieties of rice on terraced paddy fields.

The winters and monsoons are the best times to visit Kohima because this is when the weather is nice enough to go on sightseeing trips. Summer is the ideal season for going trekking. Kohima is also easily accessible for tourists due to its proximity to Dimapur.

By Air. The nearest Domestic Airport is Dimapur Airport from Kohima city, roughly 74 Kms from Kohima.

By Rail. The nearest Railway station is located in Dimapur, roughly 74 Kms from Kohima. …

By Road. There are buses run by the Nagaland State Road Transport which ply between Dimapur and Kohima

Tourist Places In And Around Kohima

Tourists will find a basket full of goodies in this town, as well as portraits of scenic beauty all over the place. The sharp peaks, tearing clouds, and misty wind make this a must-see destination for any tourist. Tourists from all over the world visit the State Museum, the Kohima Zoo, and Jafu Peak. The Dzukou Valley and the Dzulekie Stream are two must-see attractions in Kohima. Kohima’s Catholic Church is regarded as one of the largest and most beautiful churches in the country, and it is a must-see for visitors.

Kohima is the capital city of Nagaland, so there are many things to do here, such as shopping, visiting a few attractions and historical sites, and participating in colourful festivals. Tourists should try to time their visit to coincide with the Hornbill Festival, which showcases the culture of 16 Naga tribes at Kisama Village. If you have the time, take a long hike to Dzukou Valley, which is about 74 kilometres from Kohima. Avoid visiting Kohima on Sunday because most attractions are still closed.

Kohima, Nagaland’s capital, is one of the most beautiful and fascinating places to visit. Kohima, located at a height of 1500 metres, is endowed with picturesque landscapes. Kohima, surrounded by lush green hills and forests, is an ideal location for trekking, camping, and hiking. Kohima gets its name from a wild flower called ‘Kew Hi,’ which grows in Nagaland’s mountains.

5 Best Places to visit in Kohima

If you are interested in history, a visit to the Kohima War Cemetery will be worthwhile. This cemetery honours the 1,420 soldiers who gave their lives in the Second World War against the Japanese. During the war, these brave souls heroically blocked Japanese soldiers at the Indian border. This cemetery is located near the centre of Kohima, on the northern side of the Imphal-Dimapur highway. On weekdays, the cemetery is open for visitors. The Commonwealth War Graves Commission looks after the Kohima War Cemetery.

Khonoma, located just 20 kilometres from Kohima, is a small village that bears witness to Nagaland’s rich heritage and cultural legacy. This Angami tribe village is significant in Nagaland’s history. Nagaland’s brave warriors who fought with invaders to protect their motherland used to live in Khonoma village. The traditional entrance gate of Khonoma speaks of the villagers’ sacrifice to save their land from foreign intruders. Several memorials have been built in the village to honour those fighters who gave their lives for the betterment of the village.

Dzukou Valley is the place to go if you want to walk through picturesque valleys covered in exotic wild flowers and surrounded by mystic green hills. The magnificent Dzükou valley, located at nearly 8000ft above sea level—just behind Japfu peak—offers one of the best trekking experiences. In the spring, the entire valley is covered in a variety of multi-colored flowers such as euphorbia, rhododendrons, aconitum, and lilies. Dzükou, also known as “The Valley of Flowers,” gets its name from a Mao word that means “ice cold water.” The valley has several streams of water that flow seamlessly and freeze in the winter.

This valley, located nearly 30 kilometres from Kohima, has a diverse flora and fauna, natural caves, and lush green forests, making it an ideal camping destination. The months of June to September are ideal for visiting the lovely valley. Dzükou is a must-see holiday destination in Kohima, with its emerald green hills, dense forest, swirling streams, and tranquillity.

With a height of 3048 metres above sea level, Japfu Peak is Nagaland’s second highest peak. This peak, located 15 kilometres south of Kohima, is a trekking paradise that draws a large number of visitors all year. The ascension to Japfu Peak is a breathtaking experience. The panoramic view of the valley from the peak’s summit is a photographer’s dream. Japfu Peak’s entire valley is covered in lush green forest and wild flowers. This peak is a haven for the 130-foot-tall giant Rhododendron tree, one of the world’s tallest trees. Japfu, with its mist-covered forests and magnificent scenic beauty, is one of the best places to visit in Kohima. The months of October to May are ideal for planning a holiday trip to Japfu Peak, Kohima. 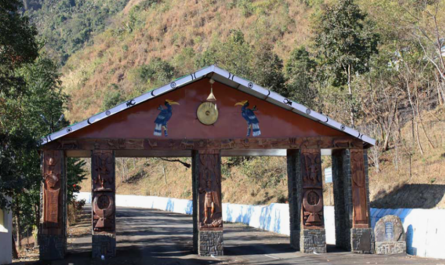