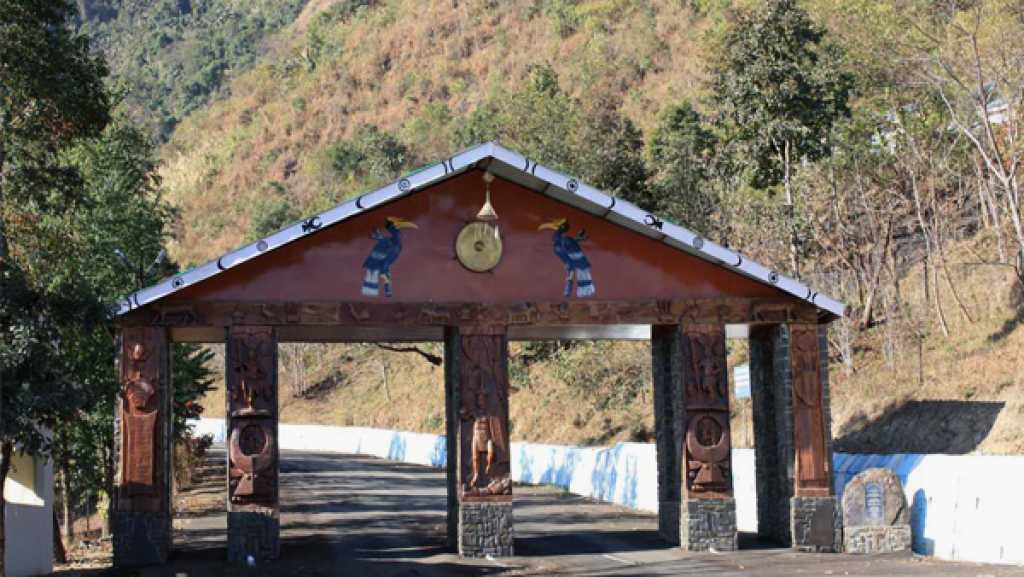 Nagaland‘s capital, Kohima, is located in India’s north-eastern state of Nagaland. It is the state’s second biggest city, with a population of about 100,000 people. The Kulkis and Naga tribes call Kohima home, and they are recognised for their independence and vibrant culture. Kohima was the site of a 64-day fight against the Japanese forces during World War II, and as a result, it holds a significant position in history.

Best Places to Visit in Kohima for Tourist Attractions in Kohima

Kisama is located 12 kilometres from Kohima on National Highway 39. The Hornbill Festival takes place on a mild slope at the base of a high mountain peak. The Heritage Villages are constructed in the shape of an ancient Naga hamlet to provide an authentic impression of a real Naga village as well as the feeling of time travel. Nagas abandoned most of their tribal culture and customs after becoming Christians. They are just recently attempting to resurrect their history. The State Government was the first to organise the Hornbill Festival. Over the course of a decade, the event has developed tremendously. Today, the Hornbill Festival is one of India’s fastest growing celebrations, attracting both foreigners and Indians. Every year from December 1 to December 7, it is currently coordinated by the State Tourism and Art and Culture Departments.

The Heritage Village is created in a traditional style to preserve the Naga Village. During their head hunting days, Nagas lived in tribes and villages and had outstanding bonding traits within one village or tribe. The Nagas hunted and lived in groups for the sole motive of survival. Some researchers have linked Naga government to the management of independent Greek villages. In a period when there was no written script or formal type of education, their sole method of learning was the Morung, where people would gather and study various talents, including head hunting. The Morung is similar to a current coffee shop, a location where people may perceive and learn from one another. Men and women have separate Morungs in each hamlet.

Touphema Tourist Hamlet is one of Nagaland’s old heritage villages and a magnificent replica of a traditional AngamiNaga village. It is set up with cabins and rooms designed to appear like traditional huts or cottages. Visitors who opt to stay here have the chance to learn about the Naga social structure, culture, and government by touring the village. A quick walk around the village may transport you back in time as you observe how Naga tribes have lived for millennia and are still there today. Visitors are also welcome to sample some popular Naga foods like as Ghalo and Bamboo Baked Fish, as well as Rice Beer (that’s what I’m talking about!) at the hamlet. Throughout the month of February, the AngamiSekrenyi yearly festival is held with great zeal in the village. This time of year, it’s always well worth a visit.

The majority of the traditional village buildings have corrugated iron roofs with no chimneys to vent the smoke from the interior cooking fires. It’s most likely one of the reasons why there’s always a lingering odour of it in the air. Touphema, located on a mild hillside with a panoramic view of the surrounding valleys, gives the opportunity to stay in adorable tiny huts and enjoy lovely nights around bonfires with ethnic dances merely adding to the rustic character of the entire location. The picturesque locations provide some of the greatest photo possibilities, and the Naga practise of presenting local delicacies with handmade rice beer is just fantastic! Within the town, a recently renovated Museum houses a significant ethnographic collection that includes wood carvings, musical instruments, fabrics, handicrafts, traditional items, jewellery, and archaeological findings.

While the town itself appears to be rather traditional, it does provide basic conveniences for its visitors. When you reserve one of these huts, you can anticipate a room decorated to reflect Naga history, traditions, and old tales. The cottages are spaced far enough apart to provide some solitude, and each is themed differently.

The Kohima War Cemetery, located in the city centre of Kohima, is a memorial dedicated to troops of the 2nd British Division of the Allied Forces who perished battling the Japanese invasion in April 1944 during World War II. The troops were killed on Garrison Hill’s battlefield, near the tennis court vicinity of the Deputy Commissioner’s mansion. The cemetery is located exactly where the fight took place and offers a panoramic view of Kohima.

The Commonwealth War Graves Commission looks for the cemetery, which is nestled amid lovely surroundings. A bronze plaque in the cemetery’s bottom section bears an inscription that reads: “When you go home, remind them about us, and say for your future, we gave our today.”

The picturesque Dzukou valley, with its emerald green undulating hills intermingled by gentle flowing streams, is hidden away at an elevation of 2,438.4 metres. It’s around 30 kilometres south of Kohima. It’s a hiker’s paradise. Though Dzükou is recognised for its biodiversity, the most common plant is the strong bamboo brush. From a distance, it seems to be a fully mowed grass. The natural surroundings, seasonal flowers, plants, and animals of this valley are widely recognised. The beautiful grandeur of the enchanting valley will captivate you. The North Eastern Valley of Flowers is an awe-inspiring sight and a trekker’s paradise.

The Khonoma ‘Green Village’ is a Rs. 3 crore initiative funded by the Ministry of Tourism, Government of India, and the Nagaland Tourism Department. Since its inauguration on October 25, 2005 by Nagaland Chief Minister Neiphiu Rio, it has become a model for all villages in Nagaland and other states to emulate. Khonoma, one of the oldest Angami Villages, has set a precedent for others to follow. This village is located 20 kilometres west of Kohima. The picturesque terraces built into the hill slopes encircling the hamlet are a sight to see. At various elevations, these terraces cultivate approximately 40 distinct species of paddy. The Khonoma people waged a succession of fights with the British intruders until ultimately surrendering in the legendary battle of Khonama in 1879 and making peace with the British.

The Khonoma Nature Conservation and Tragopan Sanctuary protects the Blyth’s Tragopan, a state-endangered pheseant. This sanctuary, which spans more than 30 square kilometres, is currently part of the Khonoma Green Village Project.

This is Nagaland’s second tallest mountain, at 3048 metres above sea level. It’s around 15 kilometres south of Kohima. The ideal months to climb this peak are November through March. The tallest Rhododendron tree in the world, which is included in the Guinness Book of World Records, may be found in the Japfu range. It is over 109 feet tall and has a girth of more than 11 feet at its widest point. In November, witnessing the dawn from the hump of Japfu mountain is a thrilling experience.

Kisama is located 12 kilometres from Kohima on National Highway 39. The Hornbill Festival takes place on a mild slope at the base of a high mountain peak. The Heritage Hamlet is constructed in the shape of an ancient Naga village to provide an authentic impression of a real Naga village as well as the feeling of time travel. The Hornbill Festival is a prominent event held inside the boundaries of this historic community. It is an annual event conducted from December 1 to 7, where visitors may receive a ringside perspective of the richness and uniqueness of Naga heritage, people, and culture.

The Tourism Department has picked this town, 41 kilometres from Kohima, to promote the annual Angami Sekrenyi festival, which takes place on February 25-27. Sekrenyi is a purifying event that centres around rites and ceremonies for cleansing the village well. It is thought that cleansed water cleanses the body of illnesses and calamities. Following then, the festival celebration begins, which involves singing, dancing, and feasting throughout the day. The community includes a protected area where one may go for a hike and have a thrilling experience.

The Rengmas live in this town, which is on the old migratory path of numerous Naga tribes moving north in search of new towns and agriculture grounds. Old abandoned towns with the ruins of graveyards, gravestones, shattered crockery, and other artefacts still tell the old stories of the people who lived in this town over the years. This provides ideal areas for archaeological tourism and preservation, but time is running out because each cycle of Jhum (Terrace) agriculture exterminates a portion of this old treasure.

The Rengmas live in this town, which is on the old migratory path of numerous Naga tribes moving north in search of new towns and agriculture grounds. Old abandoned towns with the ruins of graveyards, gravestones, shattered crockery, and other artefacts still tell the old stories of the people who lived in this town over the years. This provides ideal areas for archaeological tourism and preservation, but time is running out because each cycle of Jhum (Terrace) agriculture exterminates a portion of this old treasure.

Best Time to Visit in Kohima Kohima is a great destination to visit from October to May.

How to Reach Kohima

Kohima, as the capital of Nagaland, is well connected to the rest of the country. This is how you get to Kohima.

Dimapur Airport, about 74 kilometres from Kohima, is the nearest domestic airport. Dimapur Airport is well connected to major Indian cities such as Delhi, Mumbai, and Kolkata.

The nearest railway station is at Dimapur, which is around 74 kilometres from Kohima. Guwahati, Kolkata, New Delhi, Chennai, Jorhat, and Dibrugarh are all easily accessible.

The Nagaland State Road Transport company runs buses between Dimapur and Kohima. Apart from government-operated buses, private luxury buses and taxis travel between Guwahati, Shillong, and virtually all of the state’s district headquarters. 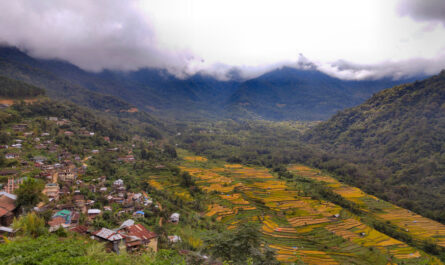