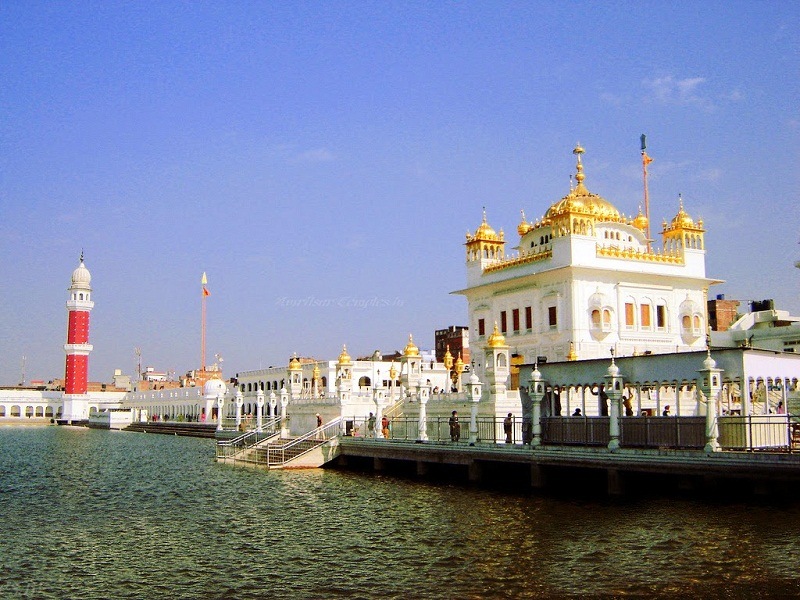 Tarn Taran Sahib is a city in the Punjab state of northern India, located in the Majha area. It serves as the district headquarters and is home to the Tarn Taran district’s municipal council. Gurdwara Sri Tarn Taran Sahib, a well-known Sikh shrine, is located in the city’s heart.
It is the Gurudwara with the largest Sarovar (water pond) of all the Gurudwaras. It is the only Gurudwara in the world that is a copy of Amritsar’s Shri Harminder Sahib. It is also known for the monthly pilgrimage on the day of amavasya (no moon light).

Baba Budha ji, a revered figure in Sikhism whose original name was Bura, was bestowed with the title “BahiBudha” by Guru Nanak Dev ji because he possessed the wisdom of an old man as a child. Bhai Budha becomes Guru Nanak’s devoted disciple. He dedicated his entire life to serving the Gurus and setting an example of holy living. He was the first high priest of the Golden Temple, a sacred shrine.

This historic church was built in 1836 under the supervision of the Bishop of the Diocese of Lahore. It is located in the heart of Tarn Taran, near the PWD rest stop.

In 1755-56 AD, Khushal Singh, the nephew of Sardar Kapoor Singh (the founder of the Faizalpuria or Singh Puria Missal), conquered this town from the Pathans during the Sikh Missal period. In 1811 AD, during the reign of Maharaja Ranjit Singh, a massive army led by Diwan Mohkam Chand attacked the Faizalpura or Singhpuria Missal and annexed the town of Patti into the Maharaja’s Empire. According to rumours, Maharaja Ranjit Singh saw the town as a potential threat and had the outer wall demolished as a result. The historical fort of Patti, which was built in 1755 A.D. and now houses the Patti Police Station, bears witness to the historical development.

Sri Darbar Sahib Tarn Taran, built by Sri Guru Arjan Dev JI, is the main religious hub at Tarn Taran Sahib. It is the Gurudwara with the largest Sarovar (water pond) of all the Gurudwaras. It is the only Gurudwara in the world that is a replica of Shri Harminder Sahib in Amritsar. It is also well-known for the monthly gathering of pilgrims on the day of amavasya (no moon light).

The Sarovar – One of the largest of the Sikh holy tanks (ponds), it is an approximate rectangle in shape. Its northern and southern sides are 289 and 283 metres (948 and 928 ft), respectively, and eastern and western sides 230 and 233 metres (755 and 764 ft), respectively. The sarovar was originally fed by rain water that flowed in from the surrounding lands. In 1833, Maharaja Raghubir Singh of Jmd had a water channel dug, connecting the tank with the Lower Kasur Branch of the Upper Ban Doab Canal at Rasulpur watermills, 5 kilometres (3.1 mi) to the southeast. The channel was cemented and covered in 1927/28 by Sant Gurmukh Singh and Sant Sadhu Singh. They also supervised karseva, i.e. complete desilting of the tank through voluntary service, in 1931. The operation was repeated in 1970 under Sant Jivan Singh. Most of the bungas around the sarovar have now been demolished and a verandah constructed instead along the periphery. The name Tarn Taran, since appropriated by the town itself, originally belonged to the sarovar, so called by Guru Arjan. Literally it means, “the boat that takes one across (the ocean of existence)”. (Tarana in Sanskrit is a raft or a boat). According to Sikh tradition, the water of the old pond was found to possess medicinal properties, especially efficacious for curing leprosy. For this reason the sarovar was known as DukhNivaran, the eradicator of affliction. AKAL BUNGA, a four storeyed building near the Nishan Sahib (Sikh flagpole), was constructed in 1841 by Kanvar Nau Nihal Singh. Maharaja Sher Singh provided the finishing touches. The Guru Granth Sahib, “after a procession around the sarovar amid” chanting of hymns in the late evening, is, brought here for the night’s rest. Manji Sahib, a small domed shrine in the eastern part of the circumambulatory pavement, marks the spot from where Guru Arjan supervised the excavation of the sarovar. A divan hall, a vast pavilion of reinforced concrete, has now been raised close to it.

Gurudwara Lakeer Sahib is a well-known and ancient Gurudwara that was built in 1978. It is believed that in 1757, Baba Deep Singh Ji drew a line with his sword and asked his followers to cross it if they wanted to fight Jahan Khan at Amritsar. Gurudwara Lakeer Sahib is located where Baba Deep Singh Ji marked a line on the ground before declaring war on the Mughal Empire in 1757. When Baba Deep Singh Ji learned of the desecration (via an Amritsar Sikh who had come to see Baba Ji), he decided that restoring the sanctity of the Guru’s Darbar was of the utmost importance, and he did Ardas (prayer) with the firm conviction that he would sacrifice his head at Harimander Sahib after successfully liberating the shrine from the enemy.

He had the strength of a young warrior despite being seventy-five years old. He rallied a large number of Sikhs and marched towards Sri Harimander Sahib. By the time they arrived in Tarn Taran, about ten miles from Amritsar, their number had grown to around 5,000. At this point, Baba Ji drew a line on the ground with his Khanda and instructed only those willing to fight and die to cross it.

Gurdwara Khadoor Sahib is located in TaranTaaran’s Khadoor Sahib city. With their visits to this location, the eight Guru Sahibaans sanctified it. GURU NANAK DEV JI visited this location five times during his preaching tours. GURU JI used to stay at the home of BIBI BHARAI. When BIBI BHARAI asked GURU JI to stay for one more day during his last tour, GURU JI replied that he would stay for many days and would rest only on this bed where he was sitting. SHRI GURU ANGAD DEV JI sat on the throne and travelled from Kartarpur, Pakistan to Khadoor Sahib on the orders of SHRI GURU NANAK DEV JI, where he stayed at BIBI BHARAI’s house for 6 months and 6 days, devoted to Naam Simran. GURU JI slept on the same bed that GURU NANAK DEV JI had mentioned. At last BABA BUDDA JI disclosed YOU.

SHRI GURU ANGAD DEV JI spent whole of his time as a GURU, for around 13 years, here only by serving his followers with Naam Updesh and at last on March 29th 1552 A.D. , GURU JI Left his heavenly abode at this place. – In the year 1541, SHRI GURU AMARDASS JI came to SHRI GURU ANGAD DEV JI & for around 12 years, with his devotional service, used to fetch a water filled Gaagar early morning from the Beas river Goindwal Sahib, which is around 9 kms away, for GURU JI to take bath. HIS service was acknowledged & hence he got “Gurta Gaddi”. – SHRI GURU RAMDASS JI while going from Goindwal Sahib to Guru Chakk (Amritsar), visited KHADOOR SAHIB as well. – SHRI GURU ARJUN DEV JI while going from Goindwal Sahib to Amritsar, visited KHADOOR SAHIB. – SHRI GURU HAR GOBIND JI after the marriage of his daugter, BIBI VEERO, went to Goindwal Sahib through KHADOOR SAHIB along with his family. Also some scholars of Sikh Panth, after the cremation of BHAI GURDASS JI, spent the afternoon at KHADOOR SAHIB while going to Amritsar. – SHRI GURU HAR RAI JI while going to Goindwal Sahib along with 2200 horse riders, visited KHADOOR SAHIB on the way. – SHRI GURU TEG BAHADUR JI after acquiring the GURGADDI, in relation to the upkeep of the various places related to the First GURU sahibaan, came to KHADOOR SAHIB. – Religious Scholar BABA BUDDA JI spent around 12 years here. Here only BABA JI applied Tilak to SHRI GURU AMARDASS JI when he took GURGADDI. – Great Philosopher BHAI GURDASS JI spent quite a long time here. – Here only SHRI GURU ANGAD DEV JI worked on improvement of Gurmukhi Lippi & wrote the first Punjabi book in rememberence of which GURUDWARA MALH AKHARA has been built. Here only GURU JI got information regarding BHAI PAIRA MOKHA JI from Bala Ji & got the biography written for GURU NANAK DEV JI. Bhai Bala Ji’s grave is built near GURUDWARA TAPIANA SAHIB. Here only did GURU JI took care of the “Baani”(writings in Guru Granth the sacred book of the Sikhs) written by GURU NANAK DEV JI & also wrote his “Baani”.

The eight-story tower will be spread across four acres of land and will provide a variety of religious education, spiritual awareness, cultural understanding, historic information, vocational knowledge, national cohesion, and entertainment options. The idea behind Nishan-e-Sikhi was to provide appealing avenues to students, teachers, preachers, professionals, sportspeople, and the general public in the wake of falling educational standards and a decline in life values in society.

“The projects planned for the Nishan-e-Sikhi tower have been meticulously planned and are expected to provide resources for educationists, learners, and professionals to help plan for the future of education in terms of enhancing job orientation and life values.” The 80,000-square-foot tower, he claims, will include an auditorium, administrative block, conference hall, religious academy, coaching classes for plus one and plus two students, and a library. “Coaching for competitive exams such as the IAS, IPS, and NDA is also being considered.” In fact, this is not Baba Sewa Singh’s only innovative project. Previously, he was instrumental in establishing the world’s first multi-media Sikh museum, adjacent to Gurdwara Angitha Sahib here.

Harike Wetland is also referred to as “Hari-ke-Pattan.” It is northern India’s largest wetland. It is situated in the Punjab state’s Tarn Taran Sahib district. The headworks are situated downstream of the confluence of the rivers Beas and Sutlej.

Tarn Taran is best visited during the winter season. If you’re lucky, you might even see some sword acrobatics performed by professionals dressed in beautiful yellow and blue Khalsa uniforms.

How to Reach Tarn Taran

There is no airport in Tarn Taran. Shri Guru Ram Dass Jee International Airport in Amritsar is the closest airport.

Tarn Taran is served by frequent buses from all of the country’s main cities.