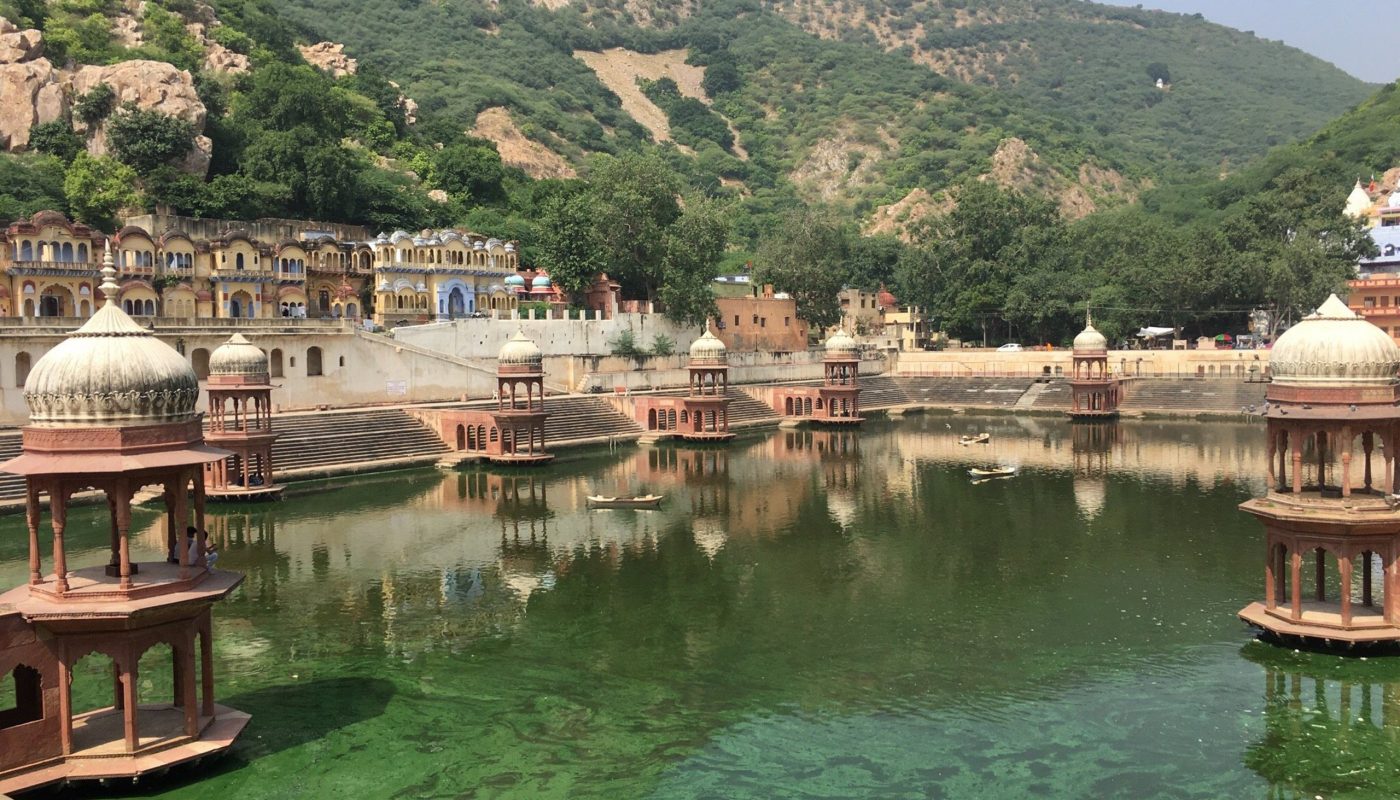 Alwar is a city in Rajasthan, a state in northern India. Alwar City Palace, which dates from 1793, features a courtyard with marble pavilions on lotus-shaped bases, as well as a museum with rare manuscripts. It’s just close to the Moosi Maharani Chhatri shrine, which is made of marble and sandstone. The Bala Qila fort, with marble pillars and latticed balconies, is reached by a difficult route. Southwest of Alwar is the Sariska Tiger Reserve. The district is between 27°34′ and 28°4′ north latitudes and 76°7′ and 77°13′ east longitudes in Rajasthan’s north-east.
It is bordered on the north and north-east by Haryana’s Gurgaon and Bharatpur districts, on the north-west by Haryana’s Mahendragarh district, on the south by Sawai- Madhopur and Jaipur districts, and on the south by Rajasthan’s Sawai- Madhopur and Jaipur districts.

Best Places to Visit in Alwar

Bala Quila, also known as Alwar Fort, is located on a steep hill and offers a spectacular view of the city from its watch towers. This fort is claimed to have been built in 1942 A.D. by Hasan Khan Mewati after passing through various hands. Maharao Raja Pratap Singh, the founder of Alwar, ultimately captured it in 1775 A.D.

The fort stretches 5 kilometres north to south and 1.6 kilometres east to west. It is located 595 metres above sea level and 304 metres above city. It features 15 large and 51 tiny towers, as well as 446 musketry loopholes. The fort is accessible via six gates: Jai Pol, Chand Pol, Kishan Pol, Andheri Pol, Suraj Pol, and Lakshman Pol. The ruins of Jai Mahal, Nikumbh Mahal, Salim Sagar, Suraj Kund, and several temples depict the great elegance of yesteryear. There is also a stronghold built by Alaghu Rai in 1049 A.D. here.

This regal house, erected in 1918 for Maharaja Jai Singh, is located 10 kilometres outside of Alwar. This huge castle is claimed to have been fashioned after the lines of a ship and is picturesquely reflected in the waters of Vijay Sagar Lake.

On the way to Sariska, stop at Siliserh’s water palace, which has a lake surrounded by low wooded hills. It is located 12 kilometres southwest of Alwar. The serene lake is situated in the hills; the dazzling ripples of the lake cover an area of around square kilometres, encircled by dense woodland and majestic cenotaphs on its embankment. Maharaja Vinay Singh erected a royal hunting lodge/palace for his Queen Shila in 1845. It has been converted into a tourist house and is an appealing option for a relaxing vacation.

This densely forested area in the Aravallis highlands is teeming with species. It is not just a treat for animal enthusiasts, but also for those interested in art and archaeology. Around 300 mythological, religious, and historical Hindu and Jain temples (8th-12th century) are built here. Sariska’s key locations include:

The Sariska palace was built in the 19th century as a royal hunting lodge by Maharaja Jai Singh. It is currently a luxury hotel and is a stunning piece of architecture.

The ancient village of Bhangarh was shrouded in mystery after this town of around 10,000 people was abruptly abandoned for reasons unknown. It has good road access. The beauty of various temples in the vicinity is worth visiting. After Bhangarh was abandoned, the residents relocated to Ajabgarh. A thriving community can now be observed among the historic structures.

Alwar’s City Palace, a fusion of Rajput and Mughal architecture, dates from the 18th century. Government offices and district courts are currently operating on the palace’s bottom floor. The City Palace Rajasthan’s attractions include an artificial lake built in 1815 by Maharaja Vinay Singh. On the lake’s shores, there are also a number of temples.

Inside the palace is a magnificent chhatri with a Bengali roof and arches. It’s called Moosi Maharani ki Chhatri. Purjan Vihar, the Company Garden, is located within this chhatri. The garden was established in 1868 under the reign of Maharaja Shiv Dan Singh. In 1885, Maharaja Mangal Singh expanded the garden even further. In the summer, this garden is a great place for a picnic because of its lush green surroundings and the soothing shadow of its many trees.

‘Chhatri’ refers to an elevated dome-shaped portico created in Rajput architecture to represent respect and pride. The Moosi Maharani Ki Chhatri is a historical monument dedicated to Rani Moosi and her ruler, Bakhtawar Singh. Rani Moosi had committed ‘Sati,’ and the Moosi Maharani Ki Chhatri was created in her honour. The Chhatri is positioned at the top of pillared sandstone, and the double-story elephant building created here is the main tourist attraction. Vinay Singh created this magnificent design in 1804 AD. The structure is a two-story structure with the upper floor entirely built of marble stone. It has beautiful curves and polished roofs. In addition, there is a water pond on the site. Vinay Singh erected it in 1815 AD.

Raja Bharthari was the monarch of Ujjain in the first century BC and is a well-known hero in North Indian folklore. He had delegated authority to his younger brother, Vikramaditya, and had begun to follow Guru Gorakhnath. Later, Bharthari became known as the ‘Nath Panth Yogi,’ and it is thought that he spent the last few years of his life at this location in Alwar. In his honour, the Bharthari shrine was created. This temple has now become a pilgrimage destination, attracting people from all over the country.

This was set out under Maharaja Sheodan Singh’s reign in 1868 A.D. Maharaja Mangal Singh constructed a summer residence, ‘Shimla,’ to it in 1885 A.D. The garden was previously known as Company Garden, but Maharaja Jai Singh renamed it Purjan Vihar.

The Neelkanth temple is located a few miles west of Rajgarh town, above Tehla hamlet. Archaeologically, it is one of the most amazing places to find, located on a plateau of the hills. Once discovered, this settlement was decked with temples and statues. Rajorgarh was its previous name.

Jaisamand Lake is 1.5 kilometres long and is very close to Alwar. There are several wonderful covered porches and spectacular structures along the lake’s borders. These towers and porches are all about 7 feet tall and built on lotus-shaped foundations. This lake was constructed to hold water from the Ruparail River.

Neemrana is a historical site in the Alwar district. Previously, the area was known as ‘Raath,’ and it served as a residence for Chouhan Rajputs. It is 122 kilometres away from Delhi and 150 kilometres away from Jaipur. The location is in the Behror Tehsil, in the centre of Shahjahanpur and Behror. Neemrana, commonly known as the ‘Ahirwal area,’ is an industrial centre for the state. This neighbourhood also houses the famed Neemrana fort, which was built in the 16th century and was occupied by Chouhan Rajputs until 1947. Since 1986, Neemrana has been globally recognised for its fort palace, which is now being revitalised as a heritage hotel. There are hanging gardens, pools, and restaurants on the property. Neemrana also has a ‘Mini Japan.’

The winter season is the finest time to visit Alwar.

How to Reach Alwar