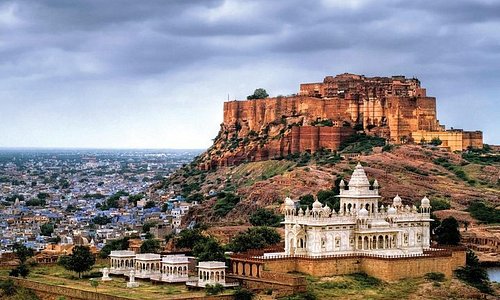 Barmer is the administrative centre of the Barmer district in Rajasthan, India. It is the seat of the Barmer Taluka and a Group ‘C’ city in terms of living standards. Barmer, founded in the 12th century by Bahada Rao (a Parmar monarch), is a lovely historical town noted for its rich art, which includes wood carvings, ceramics, exquisite needlework, weaving, and carpets. It also has a number of historical sites, including as palaces, forts, and temples.

A group of temples known as the Kiradu temples may be found 35 kilometres from Barmer. The best of them is the Someshwara temple, with architecture inspired by the Solanki period. The area was once known as Kiradkot and was ruled by the Rajput Kirad clan. From the sixth to the eighth centuries, the Kirad Rajputs dominated the region.

Vankal Mata Temple is a well-known Barmer temple dedicated to Goddess Vankal. It is situated on a 675-foot-high hilltop near Barmer’s western outskirts. From this vantage point, the view of the mountain ranges, plains, and valleys is breathtaking.

The Lord Parshvanath temple, which was renovated in the 15th century, was earlier the Lord Mahavira temple. In 1373 AD, 120 Lord Mahavira idols were imported from Kalidrah and installed in this temple. The temple is about 13 kilometres from Balotra and is well-known for its religious faith. Outsiders can remain in a ‘dharamshaala’ within the temple grounds, which includes superb lodging services for their convenience.

A religious site in the western portion of Barmer is the famed ancient Lord Shiva temple. The temple is situated on a hilltop, offering a panoramic view of the city. The location is a popular tourist destination, and worshippers from all across India come to seek Lord Shiva’s blessings.

The Mahabar Sand Dunes are located 5 kilometres from Barmer’s main city. It is a beach area that is popular with tourists since the sunrise and sunset views from here are spectacular. Camel rides are especially popular in this area, which is bordered by sandy hills.

The winter season, which runs from November to February, is extremely pleasant. The weather is pleasant and ideal for people visiting the city.

How to Reach Barmer

At a distance of 220 kilometres, the nearest domestic airport is Jodhpur Airpost, which is well connected to other important Indian cities.

Barmer has its own railway station, Barmer Railway Station, and is well connected to major Indian cities.