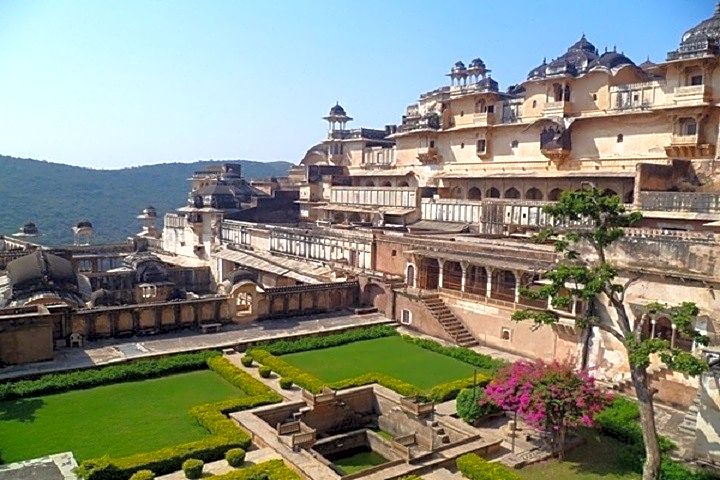 Bundi is a city in Rajasthan’s Hadoti region in northwest India. Bundi is known for its antiquities, particularly its fort, which retains the glory of the city’s former Rajput kings. The Taragarh fort, which was erected in 1354 and features enormous battlements and ramparts, is situated on a high slope and has an outstanding stone construction. Bundi is well-known for its waterfalls.

Best Places to Visit in Bundi

Rani Ji ki Baoli, located in the centre of Bundi city, is regarded as one of Asia’s top stepwells. Nathavati, the queen of Rao Raja Anirudh Singh, erected this one-of-a-kind stepwell. To enter the artistic step, there are three gates. More than eight steps are required to reach the water level of the stepwell. The artistic queen ji ki stepwell is a late-medieval gift. The value of the stepwell to tourists has grown as a result of its refurbishment and the creation of gardens around it. Rani ji ki Bawdi has recently been named Asia’s best stepwell. Jharokhas, arches, and water deities have been marked in this. The Archaeological Survey of India is currently in charge of protecting Rani ji’s stepwell.

Raoraja Anirudh Singh (1681-1695) erected this umbrella in remembrance of his brother, Deva Gurjar, in 1683. There are 84 two-story umbrella pillars in the Ranjit Niwas complex on Kota Road, in front of the Government College, and representations of various animals, birds, deities, and so on have been carved on the stone around the platform. This is an excellent example of stone art and architecture. In its courtyard, there is also a lovely garden.

Nawal Sagar Lake is located to the right as you descend from Taragarh. The shadow of the palace reaches the mind at sunset on the water of this bowl-shaped lake. Since the royal time, drains have been built from the hills on all sides to allow water to enter the lake. Varun Mandir and Mahadev Temple are located in the middle of the lake, adding to its splendour. At one end of the lake lies a magnificent statue of Gajalakshmi in Tantra style; according to legend, this idol can be found all over India.

The Taragarh painting style is known for its particular colour scheme, depiction of beautiful-faced women, deep forest wealth in the background, and so on. Many excellent paintings were created here between 1660 and 1680. Outside the Chitrashala, there is a garden and a pool. Around the pool, there are squares for sitting.

Sukhmahal and Jetsagar lakes are located just outside Bundi’s northern gate- Sukhmahal and Jaitsagar lakes. This lake, which is about 4 kilometres long, is suitable for boating. Its beauty is enhanced by the presence of a Sukh Mahal at one end. Rao Raja Vishnu Singh constructed the Sukh Mahal in 1773 AD. When walking towards Bundi city, on the right side is Terrace Garden, and on the left side is Meera Saheb Hill. Various tournaments are held in the lake on a regular basis.

Taragarh fort is located 1426 feet north of Bundi city atop a hill. Ravraja Bersingh constructed this fort in 1354 AD. The fort has four ponds that were designed to tackle the water problem. Bhima Burj is located at the fort’s heart. It has locations to see Hazari Darwaza, Hathi Pol, Nau Dhan, Ratan Daulat, Darikhana, Ratan Niwas, Chhatra Mahal, Badal Mahal, Moti Mahal, etc., in the words of foreign journalist Riddiard Kipling, “It is not man-made but appears to be by angels.”

Keshavarayapatan is a picturesque town in Bundi district with religious faith and temples. This city is 45 kilometres from Bundi and is located on the banks of the Chambal River. On Kartik Purnima, which falls in November, a large fair is held here. When the number of devotees reaches one lakh. Thousands of men and women wash in the holy Chambal river on this. The shrine of Makkash Baba is also a religious focus for the locals. Every year on the auspicious occasion of the Bundi festival, Chambal comes alive. On the river’s banks, cultural events are held. This fair is just as important as the Pushkar fair.

Bundi is best visited between October and March.

How to Reach Bundi

If you wish to get to Bundi by air, the closest airport is Jaipur, which is around 150 kilometres away. You can use the cab service till you reach Bundi.

If you’re travelling inside Rajasthan, Bundi is simple to access because it’s well connected by both state-run and private buses to numerous towns in Rajasthan, such as Jaipur, Ajmer, and Kota, as well as places in neighbouring Indian states, such as Uttar Pradesh and Delhi. Jaipur and Bundi are 206 kilometres apart. Bundi is well linked to Tonk, Bundi, Kota, and Jabalpur by NH 12 from Jaipur.

If you want to go by train, the closest station is in Kota, which is 35 kilometres distant from Bundi. A cab ride from Kota to Bundi will cost around Rs 500 from the station. Kota is well connected to a number of important cities via train.

Language should not be an issue because the inhabitants speak both English and Hindi. Commuting options include renting a vehicle, using an auto rickshaw, or taking a bus. You can simply locate tour guides to assist you in your exploration of the city. There are phone booths, fax machines, internet, and postal services available for use.