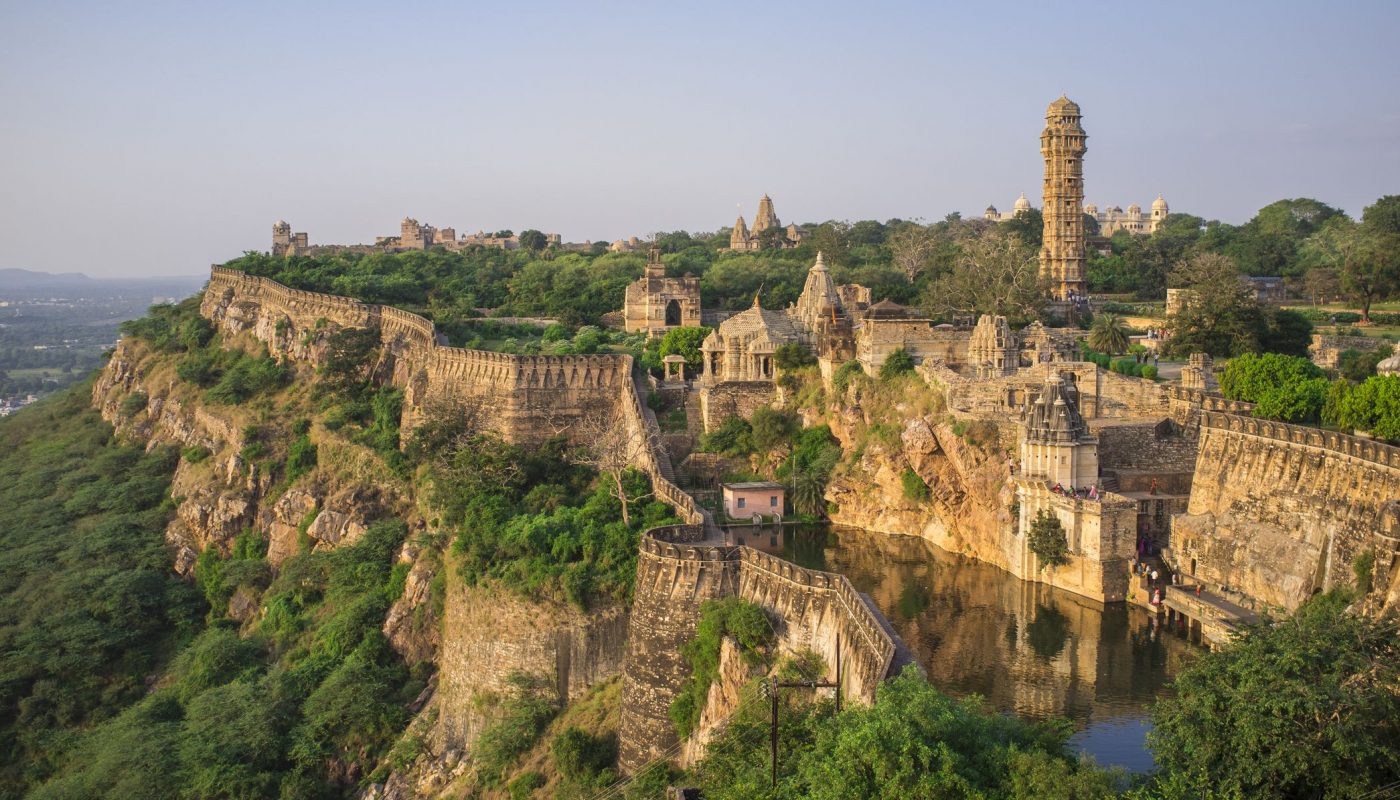 Chittorgarh is called after its most imposing building, the Chittorgarh Fort, which is stretched across 700 acres and rises atop a 180-meter-high hill. Chittorgarh, or Chittorgarh, is India’s largest garh (fort), and it’s definitely worth rearranging your itinerary to see.

Best Places to Visit in Chittorgarh

A Chittor Fort, perched on a 180-meter hill, sprawls across 700 acres (2.8 km2). The Mauryans built it in the seventh century AD. It is also said to have been built by Bhima of the Pancha Pandavas. Many renowned Rajput soldiers lived in this fort, including Gora, Badal, Rana Kumbha, Maharana Pratap, Jaimal, Patta, and others.

The Kalika Mata Temple was erected in the eighth century for the Sun God and was later changed to a temple for the mother Goddess, Kali, in the fourteenth century. During the Navaratri festival days, fairs are held, and pilgrims from all over gather to pay their respects at the temple.

Vijay Stambha is a massive nine-story tower built by Maharana Kumbha to commemorate his 1440 victory over the kingdoms of Malwa and Gujarat. The tower is 122 feet (37 metres) tall and stands on a 10 foot (3.0 metre) base. The tower’s outside walls are adorned with sculptures and decorations. The tower may be seen from any part of town below. And, after climbing 157 steps to the summit of the tower, one may enjoy a panoramic view of the surrounding area. The interior walls of the tower are carved with pictures of Gods, weaponry, and other symbols.

Kirti Stambh (Tower of Fame) is a 22-metre-high (72-foot) tower constructed in the 12th century AD. Kirti Stambh is located within the Chittorgarh fort. It is dedicated to Rishabha, Jainism’s first Tirthankara. It was created by a merchant and is embellished with Jain pantheon figures. It is a seven-story pillar built by the Digambar Jain sect’s Biherwal Mahajan Sanaya. On its four corners are engraved five-foot-high (approximately 1.5-meter-high) Digambar-style idols of Shri Adinathji, and elsewhere are carved various small idols devoted to Jain lineage deities.

Vijay Stambh is close to Rana Kumbha’s Palace. Maharana Udai Singh, the creator of Udaipur, was born here. His life was saved by the heroic gesture of maid Panna Dhay, who substituted her son for the prince, resulting in her son being killed by Banbir. She transported the prince away in a fruit basket to safety. This palace was also home to Rani Meera Bai. In one of the underground vaults, Rani Padmini performed jauhar with other ladies.

According to mythology, Rani Padmini’s Palace is where Delhi Sultanate ruler Alauddin Khalji was allowed to see a reflection of Rani by replacing mirror at such an angle that even if he turned back, he would not be able to see room. Rawal Ratan Singh, Rani’s husband, had threatened Khalji that if he turned back, they would slash his neck.

Chittorgarh Fort, located in the city of Chittorgarh, is the largest fort on the Asian subcontinent. The fortress is also known as Chittor. During ancient times, it functioned as the capital of Mewar. The fort is situated on a hilltop 180 metres above sea level and covers an area of 280 hectares. The fort’s overall elevation above sea level is approximately 609 metres. Guhilots ruled the fort at first, but the Sisodia clan took over and dominated the fortress for more than eight centuries. Akbar invaded and seized the fort in 1567 AD.

It is the country’s largest fort and a popular tourist destination.

Vijay Stambh, a nine-story tower built by Maharana Kumbha, is located within the grounds of Chittorgarh fort. It was constructed to commemorate Rajputs’ victory over Muslim monarch Allaudin Khilji in 1440 AD. The tower stands 37 metres tall. Vijay Stambh is a popular tourist destination in the city due to the gorgeous view from the top of the tower.

Kirti Stambh was built in the 12th century AD within the grounds of Chittorgarh fort. The tower is 22 metres tall and seven stories high, with Adinath sculptures on each floor. Kirti Stambh, which is older than Vijay Stambh, is another popular tourist destination in Chittorgarh.

Rani Padmini used to live in the Rani Padmini palace. Its unique architectural architecture and association with historic Rajputana tradition make it a tourist attraction. A lotus pond is also built in the palace, which adds to the interior’s beauty.

Rana Kumbha Palace, built in the 15th century, served as Rana Kumbha’s royal house. It was constructed with aesthetic architecture and design. In this palace, Maharana Uday Singh, the founder of Udaipur, was born. The palace is historically significant since Rani Padmini conducted Jauhar in it during the struggle against Allaudin Khilji. The Lord Shiva temple, which lies close to the palace, is also a major tourist attraction.

Mandaphia is a town in Chittorgarh district that is around 40 kilometres from Chittorgarh city. It is home to the lovely Sanwariaji temple. The temple is dedicated to Lord Krishna, and the temple’s idol is also known as ShriSanwaria Seth, another name for Lord Krishna.

The Bassi Wildlife Sanctuary, located 5 kilometres from the main city, is another popular tourism destination for visitors in the Chittorgarh area. The sanctuary covers more than 50 square kilometres and is home to panthers, antelopes, mongooses, wild boars, and other animals. This sanctuary is also home to a large number of migratory bird species. Without the authorization of the District Forest Officer, no one is permitted to enter the sanctuary.

Nagri is a town in Rajasthan that was constructed during the reign of the Maurya Dynasty. It is located on the banks of the Berach River. Previously, the town was referred to as Madhyamika. The area was occupied by Hindu and Buddhist communities. The inscriptions and ancient items discovered at this location support this theory.

Barolo is a tiny town near Rawatbhata in the Chittorgarh district. The town has historical significance and is home to a number of ancient Babaroli shrines.

Menal, commonly known as Mini Khajuraho, is well-renowned for its temples. Beautiful trees and waterfalls can also be found here. It is a picnic area located on the Chittorgarh-Bundi Highway.

The months of October through March are perfect for visiting Chittorgarh.

How to Reach Chittorgarh

Chittorgarh is well connected by road to the rest of India. Chittorgarh City is crossed by the Golden Quadrilateral Road Project and the North-South-East-West corridor expressways. Chittorgarh’s bus station (bus depot) is positioned in the middle of the ancient and modern city. For Delhi, Mumbai, Ahamadbad, Ajmer, Bundi, Kota, Udaipur, and other important cities, there are good bus services (both private and government).

Udaipur International Airport is the closest (Dabok Airport). The airport is 70 kilometres from Chittorgarh and is connected to New Delhi, Jaipur, Jodhpur, Ahmedabad, and Mumbai by daily air service.