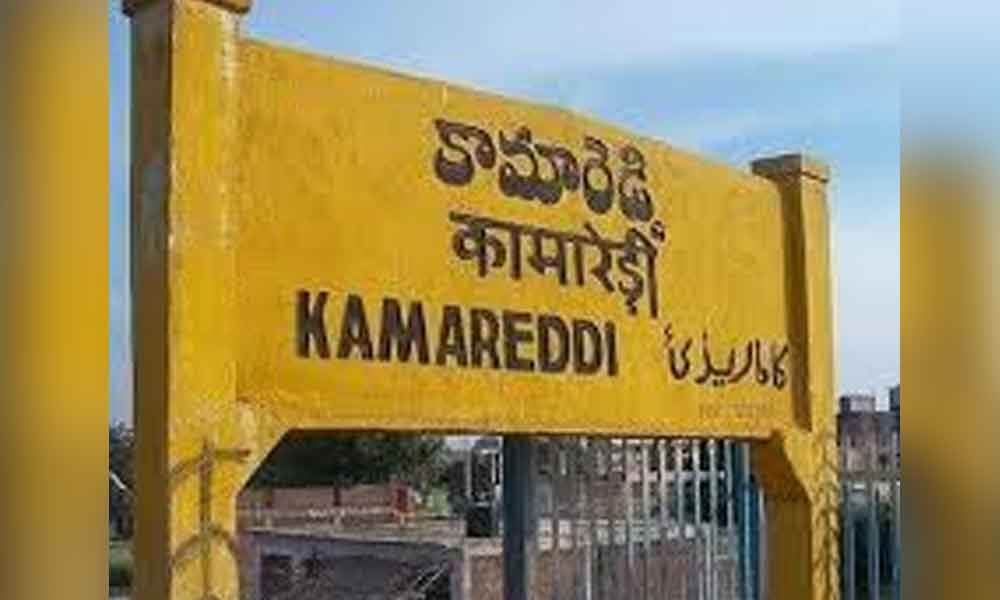 Best Places to Visit in Kamareddy

The SreeKalabhairava Swamy Temple is located in the Kamareddy District’s Isannapally hamlet, Ramareddy Mandal. After Kashi-kshetra, this is the only Kalabhairava Swamy temple in South India. On Karthikabahulashtami, Sri Kalaybhairava swamy jayanthi is grandly celebrated here, and a large number of devotees from all over Telangana state attend. The Ramareddy Bus Stand is just 750 metres away from the shrine. Kamareddy is the nearest city, and it is connected by road and rail to all of Telangana’s main cities.

With a capacity of 2.423 tmc, it was built at a cost of Rs 27.11 lakh and finished in 1922 to service the water demands of Nagieddipet and Yellareddy mandals in Kamareddy district and Medak mandal in Medak district.

Pocharam has been supplying Nizamabad and Medak district residents’ irrigation and drinking water needs for the past 95 years. The project was built with limestone by the Nizam administration, and it has a 1.7-kilometer length, a 21-foot-high barrier over Manchippa Brook, 58-kilometer-long canals dug around it, and 73 distributaries.

The hamlet of Kowlas is a historical site in Kamareddy District’s Jukkal Mandal. According to local legend, Kowlas was previously known as ‘Kailas,’ since the Kakatiya monarchs constructed five Sivalingas at the five corners. In ancient times, the kingdoms of Kowlas, Bodhan, and Nizamabad were referred to as Indur. Rashtrakutas built Kowlas Fort on its current place in the 9th century CE. In the third quarter of the tenth century CE, the Chalukyas of the Kalyani dynasty seized the Fort. The mud fort was eventually seized by Warangal’s Kakatiyas, and it remained a part of the Kakatiya empire until 1323 CE. Following the arrival of the Muslims, the fort passed through the hands of the Bahamanis, Qutb Shahis, Naikwaries, Mughals, Maratas, and ultimately Asaf Jahis.

Domakonda Fort is in the Domakonda village of the Kamareddy district of Telangana. It was constructed in the 18th century and has an elevated compound of granite rocks that forms the fort wall, followed by a wooden door on an entry door to the gorgeous two-story fort construction, which comprises of superb stuccowork and is regarded eye catching even to this day. This fort is also known as “Gadi Domakonda” or “KillaDomakonda” since it has a palace mahal, and it is widely known as “AddhalaMeda” (Glass house). The lovely cottage features a courtyard with a water garden pond and granite pillars sunk into the ground that defend the pond.

In Kamareddy, there are several tourist attractions and things to see and do. However, in order to really appreciate the grandeur of this town, one must first educate themselves about it. The never-ending variety of intriguing things to do in Kamareddy might keep visitors occupied for hours. If you are a first-time tourist, a well-organized travel guide can help you answer most of your concerns concerning your Kamareddy trip. To plan your automobiles on the Kamareddy route, make a list of the most significant locations to see in Kamareddy as well as the optimum time to schedule your trip. With this knowledge, you may be certain of a fantastic vacation to Kamareddy. The Nizam Sagar Dam is a popular tourist destination.

The KowlasYellamma Temple situated in Jagannathapalle Village, Jukkal Mandal, Kamareddy District. KowlasYellamma Temple is a very old and well-known historical temple. Devotees not just from the area, but also from nearby districts and other states such as Maharashtra and Karnataka. On Sundays, Tuesdays, and Fridays, the temple is packed with worshippers. Devotees have traditionally thought that anyone who worships Godess at this temple would have healthy children. The settlement of Kowlas is a historical location with a historical Fort named Kowlas Fort and a Medium Irrigation Project named Kowlas Nala Project.

Banswada Kalki Pond is being converted into a micro tank bund, and boating facilities have been established at KalkiCheruvu, Banswada town, to take use of the new amenity.

Given the increasing population of Banswada, the town’s status as a key hub for numerous mandals, and the town’s large floating population, the Banswada Municipality has prioritised the building of parks and recreational areas.

The Santana Venugopal Swamy Temple situated in the hamlet of Chinoor, Nagireddy Pet Mandal, Kamareddy District. In the dream of King Gary, who governed the region during the time of the Nijam monarchs, 700 years ago, a man in the shape of Bhagwat appeared in a pool at the end of the hamlet in the form of an idol of Venugopal Swami and instructed him to discover it and build a temple. The next day, the monarch sent his men to explore the pool. They discovered a lovely two and a half foot Venu Gopala Swami statue with their Rukmini and Satyabhamala after much searching.

Temple of Sri Raja Rajeshwara Swamy This temple is located in Banda Rameshwarpalle Village, Machareddymandal in Kamareddy District and is also known as Sri Mallikarjuna Swamy Temple and Banda Rameshwara Swamy Temple. Sri Raja RajeshwaraSwayambhuKshetram is another name for the major presiding deity here. This is a very old temple. It was established during the Kakatiya dynasty on the directions of King Rajeshwara, a Lord Shiva devotee. The whole temple and its pillars are carved into a massive rock. Thousands of worshippers go to the temple during festivals, particularly Shivarathri and other auspicious events.

Temple of TrilingaRameshwara TandurKamareddy is a Lord Shiva temple located in Tandur Village Nagireddypet Mandal KamareddyDistrict. Lord Rama is said to have installed this Shiva Lingam, and Lord Shiva is known as BheemeshwaraSwamy. While travelling on this route, one will see that the region is surrounded by green trees, paddy fields, and a lake filled with water. There are white cows and other livestock playing around the temple, giving the impression of a complete village environment. The temple is white in colour, and there is another historic Mandapa structure in front of it that is architecturally significant. This temple appears to be average, yet it is bordered by luscious green rice fields. The history of this temple is incredible, and learning about it will take you by surprise.

The Ayyappa Swamy Temple is located in Kamareddy District’s Bichkunda Village & Mandal. It is one of the District’s busiest pilgrimage temples, with numerous devotees coming every day. The temple is devoted to Ayyappan, also known as Dharma Shasta, a Hindu celibate god who is said to be the son of Shiva and Mohini, the feminine manifestation of Vishnu.

Tirumala Venkateswara Swamy temple, also known as Telangana Tirumala, is located on the fringes of Thimmapur hamlet in Birkoormandal of the Kamareddy district. The temple’s Venkateswara Swamy statue, which was created 74 years ago. Similar to Venkanna Konda, the temple has grown in popularity during the last decade. There is a pond near Thimmapur Village that has recently been developed as Mini Tankband begun boating and named Ankamganj lake boating destination by the Telangana Government.

The Sri Bugga Rama Lingeswara Temple is highly recognised in Maddikunta village. The temple is located in a woodland region about 2.5 kilometres from the hamlet. Transportation is accessible from the neighbouring locations as well as the Kamareddy old bus stand. Maddikunta is a village in the Machareddy Mandal of Telangana’s Kamareddy District. It is located in the state of Telangana. Maddikunta Village Machareddy Mandal was reorganised from Nizamabad District to Kamareddy District as part of the reorganisation of Telangana Districts. It is 49 kilometres east of the district headquarters in Nizamabad. Machareddy is 15 kilometres away. This location lies on the boundary of the districts of Nizamabad and Karimnagar.

Durki is a historical hamlet located in the Nasrullabad Zone of the Kamareddy District. One of the Sapta Rishis, Durvasa Maharshi (Atri), resided in the hamlet of Durki and did penance. As a result, it is stated that Durki was named after Durvasu. The Somalingeswara Temple sits on the outskirts of Durki village. Historians believe the temple was built during the reign of the Kalyani Chanukyas. During the Kakatiya period, a monarch called Somnath reigned over the Banswada, Kotagiri, and Varni regions. Because the monarch lacked a son, Lord Shiva appeared while practising penance at the current temple location and gave birth to a kid. According to legend, the king called his sons Someshwars after him. Someshwar III is thought to have erected the temple.

The Sri Siddirameswara Swamy temple is located in the Kamareddy district’s Bhiknoor Mandal. The oldest temple is Sri Siddheswara Swamy Temple. It is especially well-known for the Shiva linga’s reverse posture in Garbhalaya. This temple is one of the few Lord Shiva temples in South India. Lord Siddheswara Swamy, according to devotees, is the most powerful god here. Similarly, Lord here fulfils all of his followers’ demands. Thousands of devotees from all over Telangana come here to worship Sri Siddheswara Swamy with the utmost devotion. There is a water well near the temple, and water is available all year. Similarly, the temple’s surrounding atmosphere is incredibly tranquil. A large bell is situated in the shrine and draws all visitors. In reality, the opposite posture of the Shiva lingam in garbhalaya is more noteworthy here.

The Sri Sai Baba Temple is located in Birkurmandal’s Nemli village. Temple of Nemli Sai Baba, commonly known as “Mini Shirdi.” It is located in the Nemli Village in Kamareddy district, roughly 8 kilometres from Banswada, on the main route connecting Banswada and Bodhan. The “Sri Sai Sannidhi Temple” was established by an NRI Shri Mohan Reddy Patalolla from New Jersey around five years ago, and it has become a significant tourist attraction for Northern Telengana areas as well as border regions of Maharashtra within a few months. Every day, thousands of visitors and worshipers visit the shrine. In this temple, a 23-foot Shirdi Sai cooking statue was erected to the temple complex, which spans 2.5 acres of land. This stunning celebration drew a large number of people not only from Telangana but also from neighbouring states Maharashtra and Karnataka.

The Sri Lakshmi Narasimha Swamy Temple is located in the jungle three kilometres from Chukkapur Village in the Kamareddy district’s Machareddymandal. During the summer and winter seasons, a large number of people will attend the temple to pray, and the Lord will grant the devotees’ requests. During the Chola dynasty’s reign, the temple was erected around 400 years ago. Every year, the temple celebrates Narasimha swamy kalyanosthavam in Vaishakamasam. People come from all around north Telangana during this time. SreeKalabhairava Swamy Temple, isannapally village, 20 kilometres from Chukkapur village, and Bugga Rama Lingeshwara Temple, Maddikunta Village, 23 kilometres from Chukkapur village are nearby holy locations.

Best Time to Visit in Kamareddy

The months of December and February are ideal for visiting Kamareddy.

How to Reach Kamareddy

Reach Kamareddy from Hyderabad By Road/Car/Bus:

Reach Kamareddy from Hyderabad By Train :

Reach Kamareddy from Hyderabad By Air:

ChaloGhumane.com > Telangana > Kamareddy > 19 Most Beautiful Places to See in Kamareddy